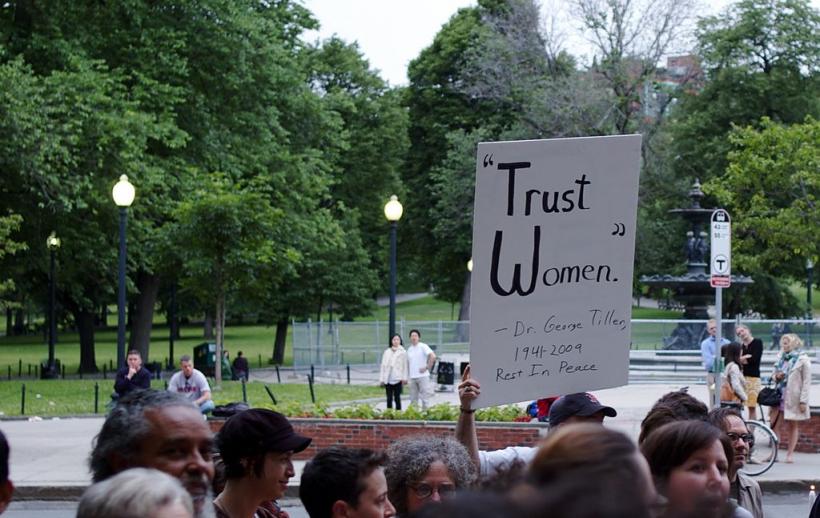 Candelight vigil for Dr. George Tiller, who was murdered by an anti-abortion extremist.

Hot on the heels of a monumental cell phone search ruling, the Supreme Court has unanimously decided that a Massachusetts law establishing a 35-foot buffer zone around abortion clinics is unconstitutional. The kicker? According to Chief Justice Roberts, anti-abortion activists aren't "protesters" at all; they're simply "individuals who approach and talk to women." (How thoughtful!)

Too bad this perspective is starkly at odds with the facts, which reveal a far-from "let's talk" approach to anti-abortion opposition. To wit:

►  Since the mid-1970s, there have been more than 200 cases of arson and bombing attacks on abortion clinics. The first time a bombing turned fatal was in 1998, when a doctor was killed —and a nurse was critically injured—following an attack in Alabama.

►  Just days after Slepian was murdered, about a dozen clinics across the nation were targeted with letters threatening anthrax poisoning—the first time this tactic was used to bully clinics. Between 1998 and 2002, 684 anthrax letters were sent to clinics.

Does this mean all anti-abortion activists are cold-blooded, bomb-happy, anthrax-loving murderers? No. But it is both obtuse and dangerous for the Supreme Court to have ignored this sordid history in its ruling. Anti-abortion protestors are just that—protestors. And since they have shown themselves to be, at times, incredibly dangerous protestors, it is perfectly reasonable to enact a safety buffer to protect those working at and going to abortion clinics.

As a woman, let's just say I wouldn't want people like this "approaching and talking" to me.