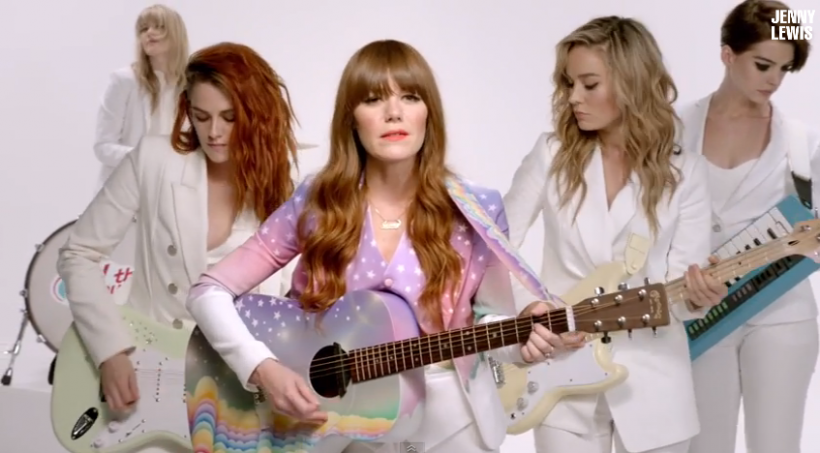 As a lifelong Jenny Lewis fan (I’m talking Troop Beverly Hills and Big Girls Don’t Cry…They Get Even), I’ve been waiting for the arrival of her new album, The Voyager, with baited breath.

So, needless to say, I was stoked to see that her new video for “Just One Of The Guys” is making waves on the intrawebs this morning. While the chatter might not necessarily be all about Lewis and her new album, the Internet is a buzz, a twitter, a talkin’. Let’s just say Lewis knows what she's doing. This isn’t her first trip to the “let’s-create-buzz-to-promote-my-album” rodeo.

The whole things raises some interesting questions about gender, especially when Lewis croons:

There's only one difference between you & me
When I look at myself all I can see,
I'm just another lady without a baby

It's unclear what Lewis' agenda is with the gender-bending video—Make a point about exaggerated gender norms? Comment on how women are viewed unfairly by society?—but it's definitely effective in opening up the gender conversation at the crux of her catchy ditty.

Yet while the drag is what people are mostly talking about, we also couldn't enough of those white suits. As members of Lewis’ sexy/sultry girl brand, Hathaway, Stewart and Larson wear some of the crispest, perfectly-cut, white suits I’ve seen in in years. Ladies, let’s get on this trend. It’s badass.

I did something I do best—a quick Internet shop—and discovered some options. For Stewart’s nautical double breasted version, pick up Ralph Lauren’s Colette Naval Jacket. To achieve Hathaway’s more fitted, slightly shrunken look, go with Milly’s Cropped Blazer. And finally, for something a little more relaxed a la Brie Larson, stick with this (wallet-friendly) blazer from Chicwish.

Unfortunately, keytar and badass affect are not included.

If you like this article, please share it! Your clicks keep us alive!
Tags
music videos
style
Fashion
kristen stewart
brie larson
tailoring
Anne Hathaway
jenny lewis
all white everything