An Insider's Look At The Strangely Sexist World Of Waitressing 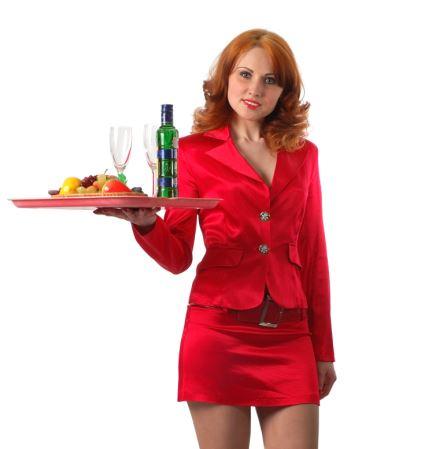 Like more than 2 million waiters and waitresses across the country, I know what it's like to fill up water carafes while balancing a plate in the other hand, how to feign joy while crooning "happy birthday" to unsuspecting patrons, and the mnemonic devices necessary for memorizing specials, salad dressings and sides. And as for many, mastering these arguably odd, motor and interpersonal skills was in many ways a godsend—in my case, waitressing helped me through grad school and, later, my requisite unpaid journalism internship.

Having been through the waiter-ly ringer myself, I can vouch for the fact that serving is, in addition to many other things, absolutely sexist.

Of Sexism And Serving

This oft-overlooked facet of the job is in the headlines today, thanks to a just-released report revealing that 80% of women working in the restaurant industry say they've been harassed by customers. That's right: 80%. And according to the dean of the Rutgers School of Management and Labor Relations, this is mostly due to one simple, salient fact: Restaurants covet tips, and sexy, flirtacious women who solicit said harassment get more of them.

Setting aside how this assessment (surprise!) puts the onus of responsibility on women to stop "asking for" harassment, this figure gets at how prevalent sexism is to the profession of serving.

And obviously, it's not too hard to see why this is the case: Waitressing, after all, involves women in servitude performing the domestic task of providing food; the friendlier and more subservient the waitress, often the better the tips they receive from men.

This sexism is both systemic and socially encouraged. Consider the ubiquity of online articles giving men tips on how to ask "cute waitresses" out. While this is partly par for the course—you can also find articles about asking out your doctor or dentist—it seems men are particularly keen to turn their sexy servers into play dates.

Here's how Askmen.com, in its article "How to Date the Waitress," describes the situation of asking a cute server out:

"So, you walk into a restaurant and you wait 15 minutes for a table. You're starving. You sit down, stare at the menu and a kind voice says, 'Hey, guys, what are you in the mood for tonight?'

You look up and your tongue hits the ground. The hottest waitress you've seen in a long time is staring directly at you and you don't know what to say. All your friends’ eyes are on you, because they see the stunned look on your face, and they all know you're hot for her . . . "

The "kind voice." The "what are you in the mood for" sexual undertones. The implicit power dynamic of the man in need and the waitress ready to give him what he wants all play into a docile sex-kitten trope that, as the article points, is apt to make a "tongue hit the ground."

But perhaps the most damning part of the sexism is how easy it is, as a woman, to play into it. For my part, I was never explicitly encouraged to flirt, but I'd be lying if I said I never did. Granted, I was very friendly to both genders, but I knew damn well that being "very friendly" with men carried a different subtext. I once spilled on the same man twice—first water, then milk—and using a whole lot of demure apologizing and giggling, ended up with a 30% tip. Did I play up the "cute, friendly, scatterbrained blond" angle consciously? It's hard to say. But it happened. And, to confirm what the Rutgers dean noted, I did it because I was indeed struggling financially and couldn't afford to lose out on the tip.

Like many waitresses, I was also asked out, twice. (Not, I hope, by the ridiculous author of the Askmen.com article.) This "ready-and-willing" notion is another offshoot of the industry's sexism; a presumption that waitresses are all just waiting around to be asked out by their male customers. In truth, I accepted both offers, and they actually made me feel like I must have been doing my job really well . . . or else, why would they have "liked" me so much? Scarily, I didn't register at the time how I had calmly conflated being considered desirable with proficiently doing my job as a waitress.

This isn't to say waitressing is steeped in a blur of miserable misogyny 24/7; it's not as if I had customers constantly grabbing my ass and calling me "sugar" all the time.

But in an ideal world, waitresses would only be accountable for providing polite, efficient service . . . without any other expectation to elicit those coveted tips.

If you like this article, please share it! Your clicks keep us alive!
Tags
waitressing
sexism
harassment
report
restaurant industry
serving