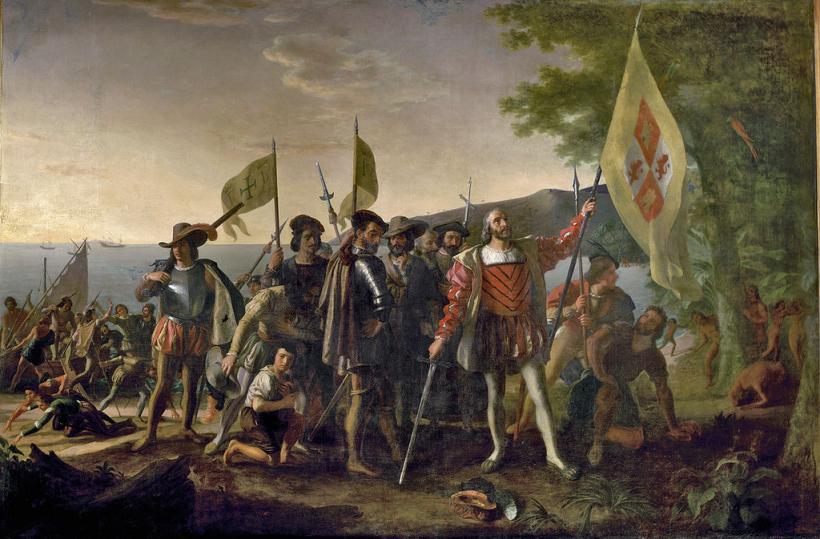 We hope it comes as no surprise that Columbus Day celebrates a historic figure not terribly worthy of a laudatory holiday. During his New World expeditions, this is a man who cut off the noses and ears of native captives who resisted slavery, lopped off victim's heads, and killed babies for dog food. (Happy Columbus Day!)

It's also worth noting that Columbus was a man who engaged in atrocious acts of sexual violence—and that these actions have repercussions that extend far beyond a particularly dark period of colonial history.

Upon landing in the Bahamas, Columbus sexually abused and enslaved girls as young as nine (yes, nine) years old. In his own log, Columbus once blithely wrote:

"A hundred castellanoes are as easily obtained for a woman as for a farm, and it is very general and there are plenty of dealers who go about looking for girls; those from nine to ten are now in demand."

Columbus even used said abuse as a reward for his men. According to author, sociologist and University of Vermont history professor James Loewen:

“As soon as the 1493 expedition got to the Caribbean, before it even reached Haiti, Columbus was rewarding his lieutenants with native women to rape."

One Columbus shipmate wrote about taking a teenage “Caribbean girl as a gift from Columbus"; when she “resisted with all her strength,” he “thrashed her mercilessly and raped her.” Another time, a woman who suggested that Columbus was of lowly birth was stripped naked and paraded around the colony on the back of a mule.

Columbus' sexually abusive actions were more than another indicator of his noted brutality or depravity; they were predicated on a particularly insidious idea that native "others" are inherently less "valuable" (because human life apparently stacks up in a hierarchy) and thus invite and justify sexual debasement.

But here's the thing: this idea endures even today.

According to Amnesty International, Native American and Alaskan Native women are more than 2.5 times more likely to be raped or sexually assaulted than other women in the U.S. And in at least 86 percent of the reported cases of rape or sexual assault against these women, survivors report that the perpetrators are non-Native men. Says Amnesty:

"Historically, Indigenous women were raped by settlers and soldiers . . . Such attacks were not random or individual; they were tools of conquest and colonization. The attitudes towards Indigenous peoples that underpin such human rights abuses continue to be present in in the USA today. They contribute to the present high rates of sexual violence perpetrated against Indigenous women and help to shield their attackers from justice."

In other words? In celebrating Columbus, we're not only implicitly condoning—and celebrating!—shocking sexual violence and sanctioned racism that took place hundreds of years ago, but actively perpetuates it today. It'd be one thing if we could look back on this epoch in a similar fashion to the way we analyze/explore atrocities like the Holocaust and the African Slave Trade and say, "wow, that was sickening, we've certainly made some societal strides," but sadly this sexual subjugation of native people still feels too close to home.

And since all this oppressive violence just doesn't put us in a very festive spirit for some reason, we'll be over here celebrating Indigenous Peoples' Day instead.