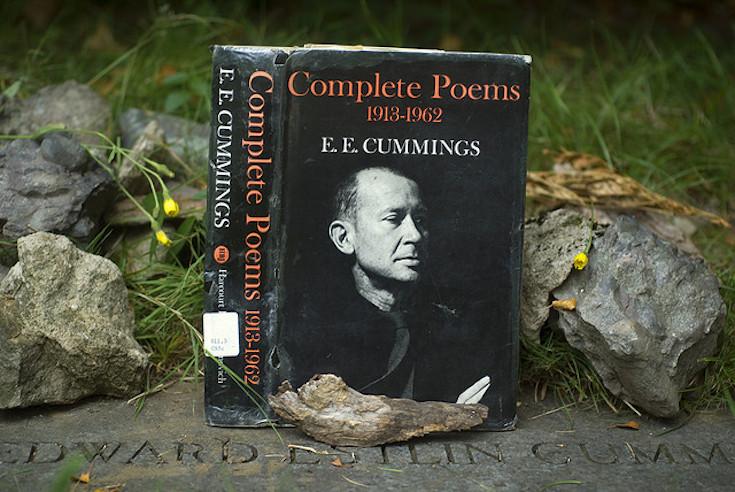 Remember the 2005 movie In Her Shoes? I thought about this movie today when I heard that it's the birthday of e.e. cummings, whose poem "[i carry your heart with me(i carry it in]" played a key role in a highly emotional moment near the end of the film.

The poem is one of many to define the legacy of a man whose work resonated with many, and who in many ways changed how we view language and prose.

Get your party hats on as we celebrate him here.

Cummings, whose first name stands for "Edward Estlin," was an American poet who lived from 1894 to 1962. It seems that Cummings wished to be a poet from day one, and spent his life writing. He attended and graduated from Harvard, and during the first World War (so, shortly after he graduated), he volunteered for the Norton-Harjes Ambulance Corps—an organization that helped wounded Allied troops get to hospitals safely.

Because life is complicated, Cummings was then imprisoned for suspicion of treason by the French. Though his sentence was only three months, Cummings later turned his experience into a book called The Enormous Room. When he finally returned to America, Cummings was a bit of a celebrity. Though he was mostly self-published, his works (especially the prison book) gained him lots of fame. Meaning: He was poor, but well known. Cheers.

Today, Cummings' work is celebrated for its apparent allergy to conformity. Style, structure, words, spaces, punctuation, capitalization—all were malleable to Cummings. Check out some of his poems below, and see how "[i carry your heart with me(i carry it in]" stacks up against them.

I Like My Body When It Is With Your

i like my body when it is with your
body. It is so quite new a thing.
Muscles better and nerves more.
i like your body.  i like what it does,
i like its hows.  i like to feel the spine
of your body and its bones,and the trembling
-firm-smooth ness and which i will
again and again and again
kiss, i like kissing this and that of you,
i like, slowly stroking the,shocking fuzz
of your electric furr,and what-is-it comes
over parting flesh….And eyes big love-crumbs,

of under me you so quite new

If freckles were lovely, and day was night,
And measles were nice and a lie warn’t a lie,
Life would be delight,—
But things couldn’t go right
For in such a sad plight
I wouldn’t be I.

If earth was heaven and now was hence,
And past was present, and false was true,
There might be some sense
But I’d be in suspense
For on such a pretense
You wouldn’t be you.

If fear was plucky, and globes were square,
And dirt was cleanly and tears were glee
Things would seem fair,—
Yet they’d all despair,
For if here was there
We wouldn’t be we.

Then, we have "I Will Be." Enjoy the strangeness of its form, and curse your English teachers for disallowing the same from you!

i will be
M o ving in the Street of her

street
where
you will come,

If you like this article, please share it! Your clicks keep us alive!
Tags
Birthday
e.e. cummings
Edward Estlin Cummings
poet
poetry
Love
romance
Sex
i carry your heart
If
I Will Be
form
style
content
poem
ambulance
World War I
Harvard
writing
high on history
prison
novel
Book
The Enormous Room