The Highs And Lows Of Parenting In The Digital Age 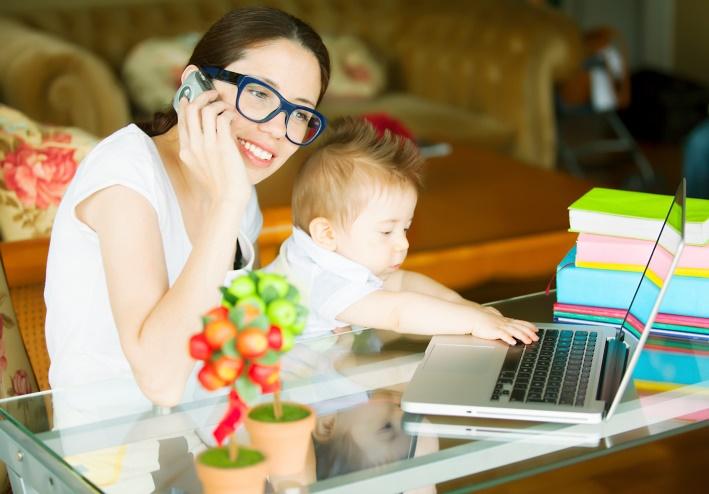 This is so cliche. I'm sitting in a salon chair while someone else paints my fingers and toes. And while they paint, I write. On an iPad, with a keyboard connected to it through the AIR. I don't even know how that works, to be honest.

Things are not as they once were, dear readers.

At age 40, my adulthood has been defined in many ways by the technological revolution. I had my first "cellular" phone at age 16. It was a suitcase. And I carried it around as such. Lest you think I was spoiled, let me assure you I only had it because my father's then girlfriend worked for Cellular One (which was later absorbed by AT&T in the early stages of their taking over the cellular world). When I had my first child, Al Gore had barely invented the Internet, and accessing it took so long you could make and eat a sandwich while the incessant beeeeep boooooop bzeeeep went on behind you. Web pages were mostly just text and still took approximately seven days to load. Before long, you could pirate a movie, but to do so your computer would have to be connected to the Internet all night, and part of the next day. And because Internet wasn't unlimited, it would cost enough that you probably should have just paid the $5 to go to the theater.

When you had a baby back then you had Dr. Sears or Spock, What to Expect When You're Expecting, and the Better Homes and Gardens Baby Book that your mother passed down to you if you were lucky. It would teach you how to take a rectal temperature and make some (gross/smelly) baby formula with evaporated milk. Also: how to dress your baby appropriately for winter (THREE LAYERS LADIES). How to correct behavior (give little Johnny a firm swat). How to decorate the modern nursery (changing tables, diaper pails, decals).

There was no blogging. No Baby Center. No Facebook. No Twitter. No Instagram. Not even MySpace. There was No. Thing. But it was different in kind of a good way. Let me tell you why.

No one was perfect and no one could really even pretend to be perfect.

In the pre-Internet age, there was really no way you could even fake perfect. Let's say today I want to post a photo of the totally adorable Halloween costumes I just made. They go on Instagram. I have a couple thousand followers so I get a fair number of likes and comments. I'm SO CREATIVE OH MY GOD. I am AMAZING. However. What my followers can't see is A. There is a gigantic pile of fabric scraps on my floor. B. The dog is eating said fabric scraps. C. The children I made the costumes for are not only screaming at the dog to stop eating the aforementioned fabric scraps, they are also screaming at each other because red is better than blue/blue is better than red/pizza is better than Mac and cheese. WHATEVER. The point is. There is screaming. So much screaming. And my toddler just pooped. On the floor.

The same thing goes for last week, when I posted a gorgeous photograph of my freshly made bed, all white and gloious. Complete with three handmade pillows, fluffed and karate chopped for proper display. What my followers didn't know is the reason my bed was even made in the first place is because someone had peed on it the night before and two days before that someone had spilled chocolate milk on it. Also making the bed takes practically an act of Congress, as two toddlers bounce around on it and throw each pillow to the floor. Over and over. And over. Oh, and? There are six loads of laundry in a pile right behind me. But you can't see that. So as far as you know my room is a page right out of a magazine.

Remember that time I posted a picture of my family room? With the spotless aqua blue sofa decorated with throw pillows and the afghan I crocheted myself? Not a toy in sight. No dog or cat to be seen. No cups or snack bowls. What no one could see was that five minutes later, there was a cup of goldfish crackers ground into the carpet, all of the pillows were back on the floor (where they belong, obviously), someone had spilled a cup of water, and all three, yes THREE, dogs were inside jumping on the sofa. And there was me. And i was crying.

And let's talk about Pinterest. I'm legitimately one of the most diversely crafty people I know. I sew, bake, crochet, knit, decorate. I do it all. Well, I try to do it all. But every time I open the Pinterest app on my phone I am reminded how I am a terrible miserable failure. At pretty much everything. My kids aren't dressed head to toe in stuff I made. I haven't chalk painted anything. at all. ever. And I don't know where to even get a pallet, much less how to turn one into a planter/bookshelf/play kitchen/television. It's a dog-eat-dog craft world out there, folks, and I'm wearing knitted and bedazzled milkbone underwear.

The Internet gives us a window into people's lives. But it is a very small window. Like one of those teeny tiny windows you sometimes see in front doors. We can see what people choose to show us, and what they don't wish us to see can remain hidden.

There seems to be this sort of out of sight, out of mind phenomenon with the Internet. Someone posts a photo of their adorable baby in a carseat and all of sudden there is a bandwagon and everyone is on it. Why isn't your baby rear-facing? Why aren't your chest clips at the armpit or higher? Why is your baby wearing a coat? Don't you know you can't put a baby in a coat in a carseat? WHAT IS WRONG WITH YOU? You're a horrible mother.

You know exactly what I'm talking about. Breastfeeding, vaccines, circumcising, spanking. It's not that these hot buttons weren't always hot buttons. And I'm as staunch an advocate for breastfeeding as you'll ever meet. But looking your new mother friend in the face and saying, "Why did you choose formula over breast milk?" is not the same as her being attacked by a bunch of literal strangers on the Internet.

Trash talking is real. But things were different then. If you disagreed with a choice someone you knew made A. You knew them B. You maybe knew that they chose bottle over breast because they have inverted nipples, or because they had to go back to work, or just because they didn't want to breastfeed. C. You were a lot less apt to judge someone because of this. And when you did judge someone, you just did it over coffee with another catty mother, not on the Internet with the whole world watching her get ripped to shreds until she finally deleted her whole damned Instagram page because she just didn't even know what to say.

I wrote about raising my sons to be feminist. I got called stupid, a cunt, a bitch. I was assured my boys would be gay/wear dresses/be terrible people (P.S. You can't make anyone gay, you moron). Even though comments are often moronic and I know this, would those people have been as likely to call me a cunt to my face? Maybe. But I could have at least actually walked away. Or I could have said, "Hey, you're a MORON." The point is, I would have had the choice.

What I'm saying is the Interent is ugly sometimes. And raising kids using it doesn't always make it easier.

Parenting is hard. Inadequacy is real. We have these tiny people. We want to love them and raise them to be awesome big people. And we are all worried about screwing that up rather royally. We are ALL worried. Even on my best days, after I've done 600 billion things, when my head hits the pillow, I'm still asking myself if I could have done better. If I'm doing enough and doing it right. At midnight I go to Twitter and ask my friends what they think and they (thankfully) laugh/cry/scream with me.

The Internet is so so good, too.