Raising Teens Doesn't Have To Be A Nightmare 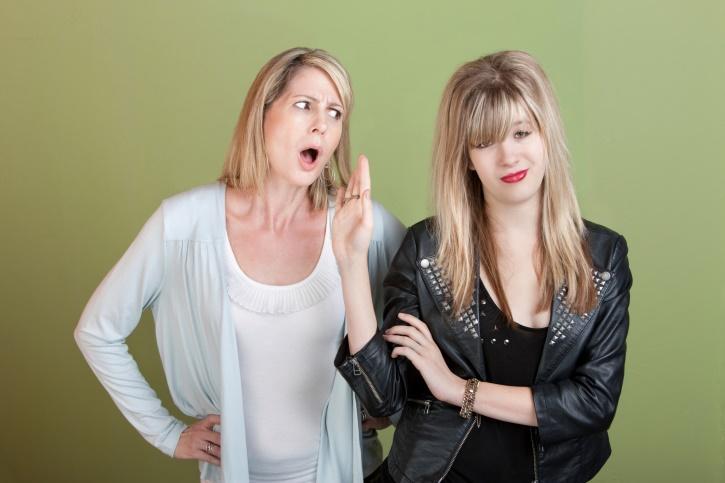 Not unlike how you wake up one day and you're 40, teenagers just sort of happened to me. One day I was wiping snotty noses and teaching people how to read. Then bam, next thing you know I was talking to my kids about what birth control they should use. The teenage years were sneaky, the clingy needs of infancy giving way to the limit-testing years of adolescence, which then suddenly transitioned into that self-defining period between ages 13 and 20.

I myself wasn't a bad teen. In fact, I could be characterized as a pretty darn good teen. I followed most of the rules, maintained a 4.0, and didn't drink or smoke (much). I was having sex too early, but I was using birth control, so point and counterpoint. My dad, who I lived with between the ages of 14 and 17, didn't have to worry much about finding me hip deep in mischief.

But that doesn't mean that the mere thought of having teenage children didn't induce both nauseating fear and nail-biting anxiety. As of this writing, I have a 14-, 16- and 19-year-old calling me mother (plus two toddlers). And so it is with some measure of authority that I write the following.

Teenagers aren't worthy of the fear they so often invoke.

If you've survived—or even thrived during—the toddler years, you've won half the battle.

Let's just say it's not called the terrible twos because of a love for alliteration. While I wouldn't go so far as to call toddlers terrible, I will say that they are a pretty self-righteous, self-absorbed bunch. As far as your three-year-old knows, the entire universe, and probably the universes outside this universe too, revolve around them.

That being said, if you give them some space—by which I mean the whole house, because they think it all belongs to them—they will show you how they are turning into actual human beings right before your eyes.

In this sense, teenagers are a lot like toddlers. If you aren't so terrified that they're going to do something completely abhorrent, you'll see that they are becoming pretty awesome people. Last night I nearly exploded with pride as I watched my 16-year-old son play lead trumpet in jazz band to a packed auditorium. I can pick the sound of his trumpet out of the ensemble every time, and can't watch, or listen, without tears. My 14-year-old is in winter guard, critics be damned, the only boy on the squad. He will toss that rifle, and when that's over he plays sax like he means it. My 19-year-old is a gifted and gracious yogi, and a beautiful young woman in so many ways.

They aren't just my kids anymore. They are their own people outside of this house and its four walls—and that is awesome to watch unfold.

It's not all terrifying. Even the terrifying stuff.

I am forever seeing articles circulating about what apps you should be deleting from your kids' phones. And I'm thinking, If you're that consumed with worry, why did you give them a phone in the first place? This isn't to say that I don't talk to my kids about what they're doing on their phones. But I think it's important to offer them a measure of trust—respect, even.

Teens are under your care and supervision, but that doesn't mean they aren't capable of independence or even (gasp!) intelligent thought. That also doesn't mean they might not royally screw something up. But the screw-ups are where the learning is, so that isn't that terrifying.

I remember in my own teen years, I shared printed photos with my college boyfriend, which then made the rounds with his friends. This was embarassing but not fatal, and my lesson was learned. And this was, to be clear, long before the supposedly doomsday advent of the Internet and social media

If you've done your homework up to this point, don't be so afraid that your kids are sending/receiving pictures of their/someone else's boobs. Because A. If you've discussed the dangers of this sort of thing (predators, child pornographers, someone screenshotting said boobs and sharing them on tumblr) then you've discussed it and you're being a parent and congratulations, you're doing your job. And B. People can see boobs pretty much anywhere so maybe focus your fear energy somewhere else.

What about The Drugs?

I've seen a lot of Intervention (and by a lot, I might mean literally every episode). I'm sure that the parents on that show are, generally speaking, blindsided by their child's substance abuse. I'm not suggesting that I wouldn't be blindsided as well if a bag of pot fell out in the laundry—but it would mostly be because I don't give my teens enough lunch money to afford a bag of pot. Pot doesn't really scare me because . . it's pot. There are worse things. So much worse things.

In my household, we discuss drugs. The dangers, and the reasons why they seem appealing, and why they aren't a great idea. This isn't any guarantee that my teens won't use drugs, but I'm not scared, because we are having ongoing conversations and I am paying attention to what's going on. I know where my kids are, who their friends are, where they are going and when they are coming home. And that's all I can do. That's it.

What about The Sex?

You are never going to convince me that teaching abstinence will work. Ever. Sexuality and how we define ourselves sexually is an integral part of growing up. Also: hormones. If you've forgotten what being a teenager feels like, let me remind you that it feels like sexual arousal pretty much every time you're around your girl/boyfriend and probably a lot of the time when you aren't.

My advice here is this: Despite what you may want your kids to do—ie, wait to be married to engage in anything more sexual than a kiss—they may actually have The Sex. In fact, it is a pretty likely scenario. Stop being so scared of it and just get real with them.

In my family, we talk about how waiting until you're in a long-term relationship has its benefits, like monogamy (presumably anyway, and if that's the desired status) and reduced/eliminated risks of STIs. Also, having babies is a LOT of work, so they probably don't want to be starting that now. And then we talk about how to be safe, how to respect other people's sexual boundaries, what consent is and is not.

Because I'm not a moron. Without betraying my own teens' confidences, let me just say that I know my teens either are or will have sex at some point. I will take my daughter to the gynecologist to get birth control. I will buy my sons condoms if they ask for them. I will not shame their sexuality because it. doesn't. work. And the end result of me ignoring or turning a blind eye to their sexual behaviors may be that I'm a grandmother at age 40 or they end up with HPV. So no. Nope. I will not fear the sex. I will confront it head on. Always.

May I impart this to you: Do not fear the teenage years. Being able to have a conversation with your kids about something other than poop or the merits of Super Why versus Peg + Cat is awesome. You will clash on occasion; that's what happens when kids are trying to define themselves outside of whatever constraints they feel have been set around them. You will likely have moments where you think, "Oh dear god I am screwing this up so badly." But you (probably) aren't. Kids are resilient. And they are made that way because we do screw up from time to time.

You will survive this time. And if you can take a breath, you might even enjoy it.