Eyes Or Ears, But Never The Voice: A Reminder To White Protestors From A White Ally 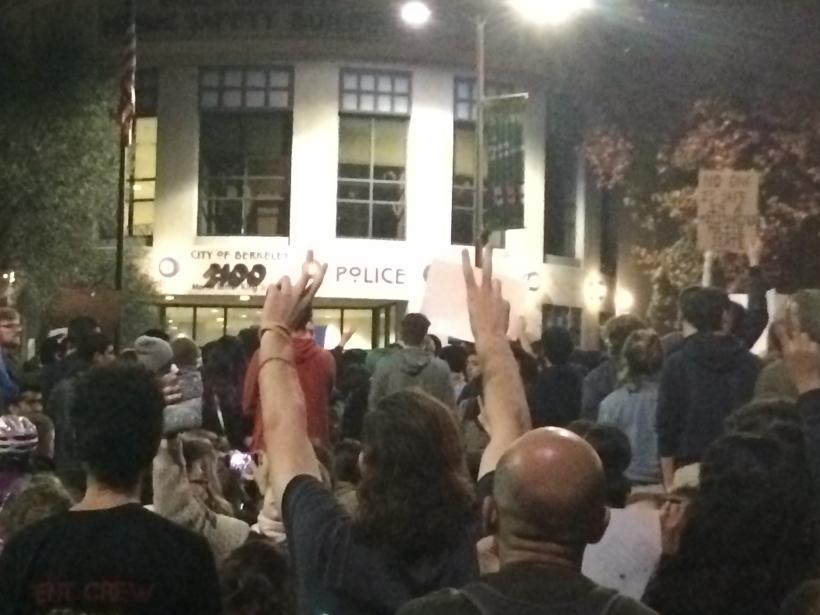 Protesters at the Berekely Police Department

As the Berkeley protesters swelled to fill the Shattuck/Channing intersection, the droning din of voices began to take shape—which is to say shapes; there was an “All Lives Matter” chant and a “Black Lives Matter” chant, in active confrontation with each other.

A sit-in arrested the tension, affording the white anarchists on the fringes of the march an avenue to attempt to disrupt the speaking protest leaders with a human mic check.

As the protest suffused and surrounded the Berkelely police building, a Black Bloc member could be seen weaving through the crowd, leaving behind cries for a “peaceful protest.”

The black organizers of the protests have been rapidly racked with a two-front conflict; they crawl along reclaimed city streets to avoid being kettled in by a militarized police force as the ever-prying hands of jilted and restless white “activists” try to wrest control of the space and spirit of this movement so they can smash bike shops and kick police barricades (as some were reportedly doing at last night's protest).

Occupy had demands, as now does #Ferguson. It is not “a lack of clear motive” that dissipates these movements, but rather the degeneration of marginalized people’s grief into aimless white anger.

The deaths of Oscar Grant, Trayvon Martin, Mike Brown, and Eric Garner are not about class or cigarette taxes or whatever else we as white people think may have contributed to their murders.

The American police system did not give out from underneath Tamir Rice’s feet. Diana Showman was not in the stands watching when “police violence” fell out of the sky and onto her.

They were murdered by militarized “peacekeepers,” trained by society to view their deaths as a necessary evil for maintaining a coercive social contract. They do not receive orders. They do not wait on a thumbs down from their sergeant. They kill because they felt the reassuring arm of a white supremacist society—one that murdered Martin Luther King Jr. in cold blood and then cited him as model behavior for future generations of black behavior—on their shoulder and a reassurance: You know what to do. For peace. For law. For our way of life.

Our anger with the police is legitimate, but when white activists wrest control of protests against anti-black police violence from the hands of a still-grieving community, the message we send is clear: Civil unrest is a necessary formality for the white narrative to reassert itself over any and all political issues.

This movement can not come into the hands of desultory whites, who throw tantrums when their chants and tactics are eschewed, who will eventually grow fatigued and bored, lacking the actual stakes in this fight of the American black community.

Right now the protests are able to stop the highways and the trains; a sit in effectively locked the police in their own building, forced to film us through the windows with their smartphones. It is a power and, frankly, disruptive enough nuisance that the police cannot allow to live. It seemed odd that the Oakland police had such access to military weaponry and tactics during Occupy. Now it seems every police force is poised to pose martial law over their respective downtowns.

If everyone goes home now, the police will only embolden. Their budgets, their arsenals, will only get bigger. And more black people in this country will die—for not “following orders,” for holding toy guns and swords, for breaking up fights at transit stations.

This must not happen. We must not let our involvement, as white allies, muddle and dilute the scope and focus of the protests—which are not about class or taxes on cigarettes or whatever the hell else you think it ought to be, but about getting justice for the callous murders of black people by police.

On the ground, we can be a shield between police and black protesters. We can be eyes and ears to witness, to document. But we cannot, must not, become the heart and voice of a movement to liberate black Americans from the unchecked violence of a police state.