"Ex-Gay" Support Group Mounts Billboard Of Lies Based On "Science" 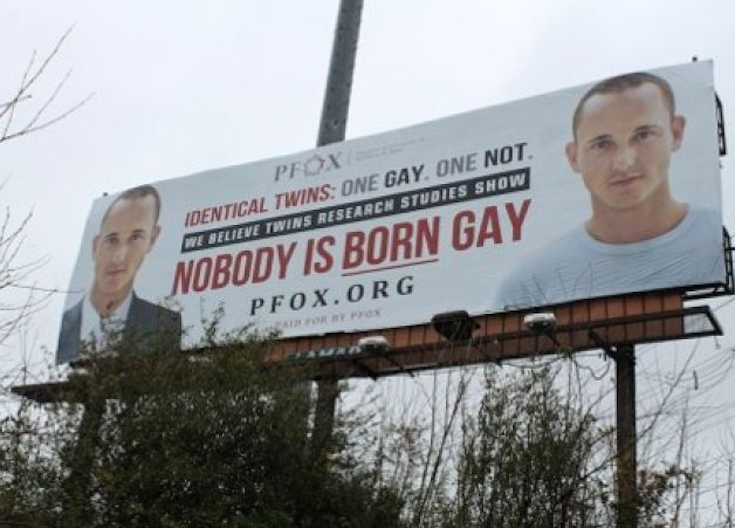 "We believe," the gray area lie. Courtesy of, YouTube

Typically these rectangular monstrosities boast a pleasure we crave within mere moments of seeing it, (like Coke—and I hate soda).

But sometimes organizations and special interest groups use these advertising goliaths to spread their maybe erroneous, nefarious, damaging agenda.

This is one of those cases.

In Richmond, Virginia, Parents and Friends of Ex-Gays & Gays (PFOX), self-described as a "national non-profit committed to helping ex-gays and parents and friends of gays who want help, hope and community," unleashed the inner-workings of their mis-aligned minds via billboard.

The ad features twin men; one wears a suit, the other a white shirt. "Identical Twins: One Gay. One Not" reads the tag. A study is (mis)quoted, claiming that "Nobody is Born Gay."

As this ad is streaking through the collection of online humanity known as the Internet like a viral comet, we've decided to explore the cited study (yes, they did cite a real study) to explain why this assumption is—gasp!—incorrect.

Let's start with the first error: the "twins." It's actually one guy, a model from South Africa, who is gay (but not a twin). Kyle Roux, the model, was rather offended by the ad's message and the use of his face to perpetuate it. He claims that the pictures were stock photos taken a decade ago. Perhaps PFOX should have sought an "ex gay" twin for the shoot.

Moving on. PFOX's website cites information pulled from a study conducted by Dr. J. Michael Bailey, a psychology professor at Northwestern University. They write (note: original spelling and grammar has been preserved):

It wouldn't take much more than the ability to solve a sixth-grade logic puzzle to point out the flaws in this assumption, but let's get to Dr. Bailey's actual findings.

Firstly, they had the figures off. Dr. Bailey asserted that 22% of gay fraternal twins had a gay twin as well—not identical. That makes a big 'ol difference: identical twins have the same genes, fraternal twins do not. In multi-ethnic families, it's not unusual for fraternal twins to look like different ethnicities. One just can't use that argument.

Instead, Dr. Bailey found that 52% of the gay men he studied had a gay identical twin. Comparing this data with the fraternal twins is significant, Dr. Bailey believes, for it supports the theory of some genetic influence at play.

Don't believe me though, read Dr. Bailey's words himself during an interview with LGBT Science:

"Much genetic influence can be thought of as something that pushes one a certain way, but doesn’t push them all the way there. And this is true for all kinds of things, including diseases and personality and intelligence and so on. And I think the same is true for sexual orientation . . . People will often get confused in their terminology. They ask for example is homosexuality genetic or learned? Well, genetic is not the opposite of learned. I think inborn is the opposite of learned. A trait can be completely inborn without being completely genetic."

So, yeah. Suffice it to say, my fledgling relationship with PFOX isn't brimming with trust. Or mutual understanding. In fact, I'm inclined to believe that "ex-gay" groups are basically a hot load of nonsense . . . but I also realize my aversion to the very notion isn't experienced by everyone.

Here's hoping this glaring discrepancy and misreporting enlightens the dubious masses out there.