The Problem With Being “Guy Funny” 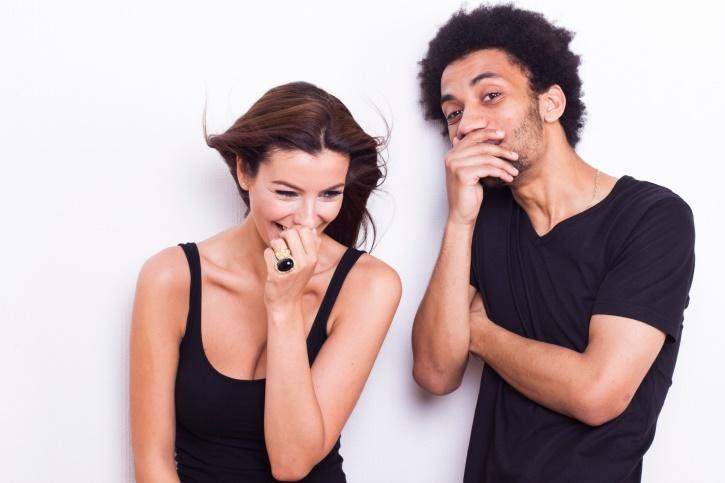 I read a recent—and while we’re on the topic of humor, hilarious—essay that likened dating a writer to putting a scorpion down your pants. I don’t really date much, so I can’t 100% confirm that this is true, but being a rabid consumer of media . . . it sounds about right. And because I write for a living, I essentially have the stinger of this predatory arthropod on me at all times*, locked and loaded and ready to wound (*where wifi is available).

Since I don’t really date—and because publicly documenting spider-like-creature-induced genitalia stings doesn’t really seem like a great way to wade into the game—I can’t put it down a lover’s pants. I do, however, happily have lots of friends. And as I’m overdue on an article, the scorpion’s gotta find someone’s trousers to dwell in (HEY, “WRITE WHAT YOU KNOW”—I DIDN’T MAKE THE RULES, OK?).

So a friend’s number has come up.

Before we begin lowering the scorpion, let me straight-up concede that I am a giant asshole to choose this particular friend (who we’ll call “Keith,” because it’s absolutely the most noxious pseudonym I could pick for him and you might as well go all out when you’re throwing cherished ones under the bus).

I hate cliches, but there’s no other way to say it: I’ve grown into a better friend and overall better person just by being around Keith. Hell, if we’re being real, which I suppose we have to be if we’re handling venomous creatures, he’s been instrumental in helping me to become a fully formed person—full stop. Even when I was struggling just to function, unemployed, hopeless, and incapable of wearing anything other than yoga pants, he never lost faith that I’d figure my shit out.

The point is, he’s everything you could ever want in a friend—an absolute human gemstone, 100% committed to gender and racial equality—and here I am, loosening the top of the scorpion jar, heading in his direction . . .

We were on the shore of his lake camp in Vermont, a remote, idyllic pocket of wilderness where cell service and wifi do not exist. I was in a dark place and didn’t want to be alone. I couldn’t have expressed that feeling, as I was still learning how to speak—in every sense of those words. But it didn’t matter; I didn’t have to. Keith knew. So he beckoned me for an afternoon of canoeing and terrible/awesome Investigation Discovery television.

And he made me laugh. This is no major task for him, as he’s easily one of the funniest people I’ve ever met. When I say he makes me more of a person, he also makes me a funnier person—I soak up his jokes and the way he executes them and dutifully file them away, hoping one day to make people laugh in the way he makes me.

Anyway, back on the glimmering shores of a pristine lake, we were discussing humor when he looked at me and said:

“Shit you’re funny. Like, damn. You’re not just funny. You’re like guy level funny. Hell, you’re even funny for a dude. I really just don’t know many people who are funnier than you.”

He was complimenting my comedic qualities. Or at least, that was his intention. I looked down at my feet, drawing my toe in circles in the dirt by the lake, an awkward expression, I’m sure, plastered on my face. Before I could figure out what to say, Keith jumped in:

“Wait. Hold up. Is that sexist? Is what I just said, like, super sexist?”

I maintained eye contact with the earth, endlessly searching for my voice, feeling out the space of the world that was supposed to belong to me, negotiating new boundaries of friendship I’d previously not understood to exist in my more insecure iteration. Quietly, so haltingly and quietly, I replied:

“When you call me guy funny, you’re establishing and adhering to a hierarchy. To say that my ability to be funny is on the level of men’s, and frame that as a positive thing, inherently ranks men—and their hilarity level—above women.”

I breathed a sigh of relief, almost confused by his benign response. It seemed like I could call out something he said and . . . we would still be friends. He would still talk to me. And Keith wasn’t even finished:

“You also could have just said, ‘Hey, yes, that was sexist. Cut that shit out.’ That kind of honesty is what friendship is about. Also, just saying, you really are funny as hell. Do you wanna make some guacamole now?”

And this is how invisible and insidious sexism can be. It’s everywhere, not even lurking, just out in the sun, so entrenched in our culture that we can’t even recognize it when it’s sprawled on a lawn chair, donning shiny sunglasses and a hat cocked to the side. It’s in the tired way we disparage men by likening them to little girls, how we use slang terms for vaginas to call someone cowardly, in how lady-brethren seek approval from men by announcing they “aren’t like other women.”

And sometimes it comes wrapped up in compliments from treasured, well-meaning friends.

Keith had simultaneously complimented and shat on me—lauding me by raising me up to the level of men, which can’t happen without squashing my fellow female compatriots. But I’d lowered the scorpion—he’d asked for it. And now I’m not guy funny anymore—instead the descriptor is “very”—and a tiny strand of sexism has been slayed, the lawn chair lounger of misogyny exposed for what it is. We did it together, him open to listening to me, me expressing my discomfort with his compliment. And this, in a number of ways, is how it all gets a little bit better.

At the end of the day, it’s really society’s pants that need the jolt of a genital sting . . . Or maybe I'm missing everything and just haven’t dated enough writers.

If you like this article, please share it! Your clicks keep us alive!
Tags
sexism
misogyny
Friendship
writing
essays
calling out
gender relations
feminism