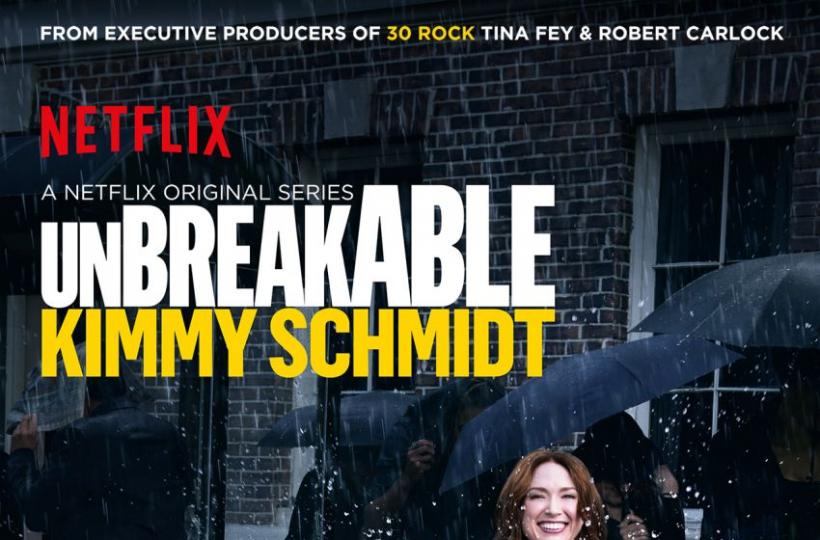 I've never seen a show with such a diverse cast that was written so obviously and exclusively for privileged white people.

I was (and still am) a huge fan of 30 Rock. The show about a fictional late night TV show with a hilarious crew of neurotic misfits skyrocketed Tina Fey to stardom as one of the best comedic writers of our day. So when I heard that Tina Fey had a new show, Unbreakable Kimmy Schmidt, and it was available for binge-watching on Netflix, I was beyond excited. I settled in with my laptop, snacks on hand, prepared to laugh.

I was not prepared for how incredibly tired, hack, and downright offensive this show would be when it comes to race. I've never seen a show with such a diverse cast that was written so obviously and exclusively for privileged white people. Unbreakable Kimmy Schmidt is the story of a young woman who was abducted as a teenager into a religious cult and forced to live underground with three other women for 15 years. After she is freed, she moves to New York to start a new life. Hilarity ensues. Or, racism ensues. I guess it depends on what you find funny.

One of the first characters introduced is fellow captive Donna Maria. She is a Mexican American woman who, even after 15 years in captivity with three white girls, can't speak a word of English. She was lured into the cult/prison with the promise of a job as a maid. Get it? Because she's Mexican. Hardy har har. We hardly see Donna Maria for the rest of the season. She's here to be Mexican. And to be a maid. That's it.

Titus Andromedon is Kimmy's black, gay roommate. Of all of the non-white characters on the show, he's probably the one with the most depth. Please note, when I say "depth," I'm speaking in comparison to the other characters, who feel like they were written by that dude who always asks the Asian kid if he knows karate. Titus is a struggling singer and actor who is basically flailing through life until Kimmy comes along. Somehow, this woman who has been in arrested development since junior high is able to navigate life in New York better than the black gay man from Mississippi who has lived in the city for a decade. She inspires him with her pluck, she saves him from his negativity. From the moment Kimmy moves in, Titus' life revolves around her. He has no storyline that does not center on being saved by Kimmy, or showing with his irresponsibility and selfishness how strong and generous Kimmy is in comparison.

Jacqueline Voorhees is the absurdly wealthy and narcissistic woman (portrayed by 30 Rock alum Jane Krakowski) who employs Kimmy as a nanny for her son. While on the surface her obliviousness to the world, contempt for the non-rich, and ridiculous demands on Kimmy make Jacqueline look like a perfect mockery of New York's elite, Jacqueline is different. She's different because . . . DUN DUN DUN . . . she's secretly Native American. Through flashbacks we learn that Jacqueline was born on a reservation in South Dakota to parents who feel like they were ripped from a sappy post of "Native American Sayings" you find on Facebook. Jacqueline doesn't want to be a boring one-dimensional stereotype, she wants to be a white woman, so she says goodbye to her parents and heads to the Big Apple. Present day Jacqueline, now wealthy and white, must fight to keep the Native American woman inside of her hidden. But alas! The call of her heritage is strong and breaks free so that she can beat up a kid in an offensive school mascot costume. Also when technology fails her, she is saved by remembering how to navigate by the position of the sun, like her father taught her. This is what being Native American is. I guess.

If you thought Jacqueline was bad, the most cringe-inducing character on the show is Dong. Dong is Kimmy's Vietnamese classmate in her GED course. He speaks broken English, he's good at math (get it! Because he's Asian), he's afraid of being deported, and he's in love with Kimmy. There is literally no more to Dong. If you thought that this character set-up was leading to a more nuanced backstory or biting commentary on how Asian American men are portrayed on American television, you were wrong. Dong is in this show to a) be Asian, b) be named Dong and c) . . . oh wait, that's it. He's Asian and his name is Dong. Hilarious.

Now you may think I'm being hard on this show, or that I'm so uptight about racial representation on television that I just don't have a sense of humor. But here's the thing, even if you ignore the racism, it's just not funny. Can you laugh about being a Native American girl wishing she was white? Certainly! There's a lot there to work with. Can you laugh about being a Vietnamese immigrant named Dong? It's definitively a good starting point. But being Native American isn't, in itself, a joke. Being Asian or Mexican is not a punchline when the set-up is also that they are Asian or Mexican. You can only laugh at the name Dong two or three times before it gets boring.

These characters could have been something. They could have been rich, surprising, and very very funny. But they aren't. Instead, these characters are accessories that this show about a young, pretty white woman wears like a colorful scarf. As Kimmy grows into a strong, capable woman, the characters of color around her devolve further into caricature. If there's one thing this show makes clear, it's that a white woman can live underground for 15 years and when she emerges she'll still be white. And that's really all you need to make it in this world.