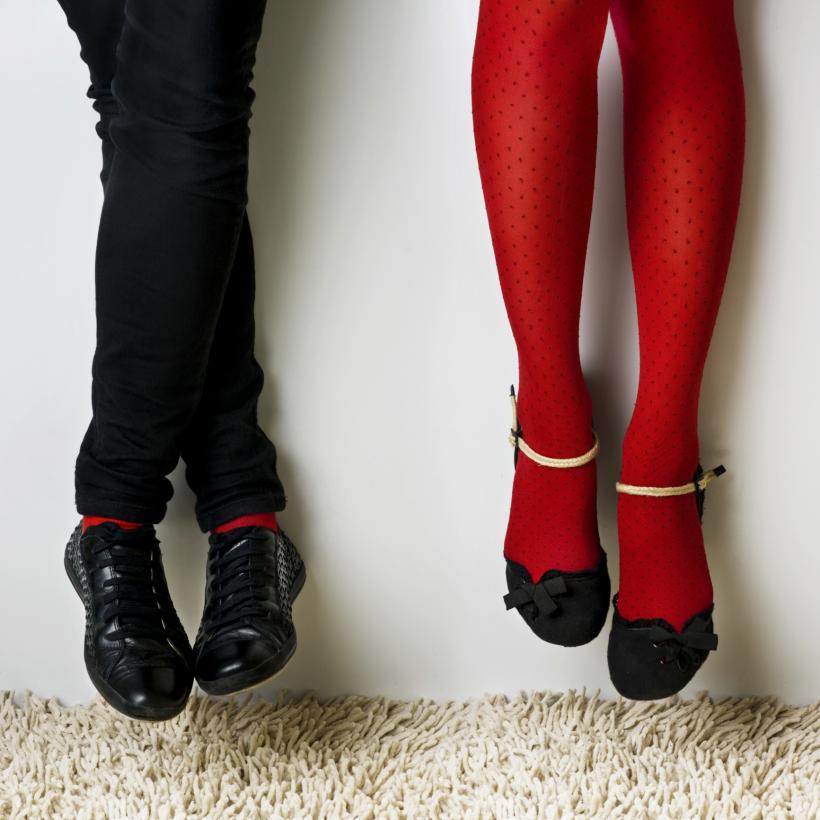 If you sat down with me and my boyfriend, you'd probably be confused about our relationship. Yet he's the best man I've ever been with.

Me: I’m a 25-year-old black girl who grew up in a small town in British Columbia. I attend university, and I like to party and have fun with friends. I drink way more than I need to (and I’m not talking about chocolate milk), and I sometimes go days consuming my body’s weight in red licorice.

My boyfriend: He’s 31, white, thin, tall, nerdy, and wears hipster glasses. He meditates, listens to podcasts about how to be a successful trader all day, taught himself how to code, doesn’t go to church, hates cleaning, and is introverted and not very outspoken.

How did we meet? Randomly. It was my third year of university and it was his last. Before meeting him, I was dating a drug dealer who, though he never treated me as bad as one sees in the movies, didn’t treat me spectacularly, either. In the beginning of the relationship, he would buy me gifts and surprise me with dinners. He would purchase outfits for me to wear, and always listened to me when I talked. He made me feel special because of how much of an interest he took in me. He was from Atlanta, and had this “bad boy gangster accent” that made me twirl my hair every time he talked.

But then, toward the end of the relationship, he began constantly putting me down. He would show me pictures of girls he had sex with before me and talk about how much better they were. He would ask me to change if my outfit was not to his taste. He would threaten to hit me, curse at me, and call me names. I came to equate my self-worth with his love—or lack thereof. I had a crazy, irrational desire to please him, and he constantly made me feel as if I wasn't doing so.

He was, all in all, terrible. Yet at that point in my life, he, and guys like him, fit my "type."

Looking back, I understand where this pathology came from. My parents didn’t have the happiest marriage and were constantly fighting, and I had grown to learn that fighting=love. If there wasn’t any fighting, or curse words being thrown around, you weren’t in a real adult relationship. I enjoyed men who made me feel as if I was worth getting mad over.

I was dead wrong.

I met my now-boyfriend on the dance floor. He was goofy and asked if he could buy me a drink. I said yes because, well, I wasn’t drunk enough yet. He asked me why I was in university, and I explained that I wanted to become a teacher. He told me his mom was a teacher, and talked about how much he admired her for it. A man who talks about his mom at the club is not, by any means, my type.

He proceeded to the dance floor, where I found a dancing pole and did a little twirl (I was quite wild back in the day). As I did, he just stood there, then put out his hand to get me down. He asked me if I’d like to dance.

We’ve been in love ever since. There hasn’t been a day when we haven’t talked. He doesn’t buy me expensive gifts, but he cooks me healthy meals and taught me how to ski. He’s involved in my life, goes to church with me, and has travelled to different countries to meet members of my family.

He continues makes me a better person. When we go walking, he always carries change with him, and we have fun giving loonies to people on the street. He has this philosophy of "we can't judge people on why they are in dire circumstances or why they ask for help, we can only judge ourselves on denying them the benefit of the doubt." And that is literally what he's done for me. I've told Adam everything. Things I wouldn't even tell myself. I waited until about six or seven months in before I told my boyfriend the secrets of my past. I talked about my father, and the previous guys in my life. I don't think he liked listening to these stories. I don't think anyone would.

I've told him things that make me look pretty bad—but he's never held it against me. Not once has he ever brought up my past and made me feel guilty about it, even though he could use that to his advantage. The fact that I put myself in a vulnerable position, and he chooses not to hurt me, reminds me that I made a good choice.

Despite all this, my boyfriend is still not my type. But I'm okay with it. In fact, I embrace it.

We are polar opposites; if you sat down with both of us, you would probably be like, What? How did that happen? Believe me, It took me a while to get over that, too. I had convinced myself at the beginning that I would be able to change him. Make him more like me—someone who is outgoing, adventurous, spontaneous. The more I did, the more he fought back with frustration and tears. Yes, I was the terrible girlfriend who made her boyfriend cry. He would come to me saying he wanted to change—he just didn't know how. I equated his ability to change with his capacity to love me.

I was consistently hurting him, doing to him what was done to me, and I didn't even notice. He was bullied as a child for being who he was, an introverted boy, so you could imagine how awful it would have been to be put through what I put him through.

I used to argue with him for not wanting to have sex with me every day, blaming him for not being attracted to me (thinking this is what “real” men wanted in a relationship). I’d get insecure if he didn’t worry that I was hanging out with guys or get extremely jealous, thinking he’d put up a fight.

It's been about a year since we've had those fights. My boyfriend has entered career of his dreams. He wakes up in the morning ecstatic about life and fills our evenings with his wishes for the future, our future. If I had kept pressuring him to be someone else, to change for my happiness, I would be dating someone who wasn't comfortable being himself. I would be dating a façade, a figment of my imagination—and our relationship wouldn't be as real as it is today.

If you've met someone who has good morale, and makes you feel good about yourself even when you can't, work on the relationship. Life is too long (yes, I said long) to fill it with meaningless relationships (it doesn't have to be sexual). Take the time to find someone worth fighting with, someone worth the struggles that come with any relationship. Relationships don't have to have fighting and pain—I need to keep reminding myself of that—but they do need to be with the right person. That person might not be your type—they might be shorter than you, have less money than you, or be from the other side of the planet. In the end, they just need to love you.

So no, my boyfriend isn't exactly my type. But I know he's the man for me.

If you like this article, please share it! Your clicks keep us alive!
Tags
Relationships
dating
Love
dating someone not your type
advice
tips