Exclusive: Military Base Bars Women From Breastfeeding In Public 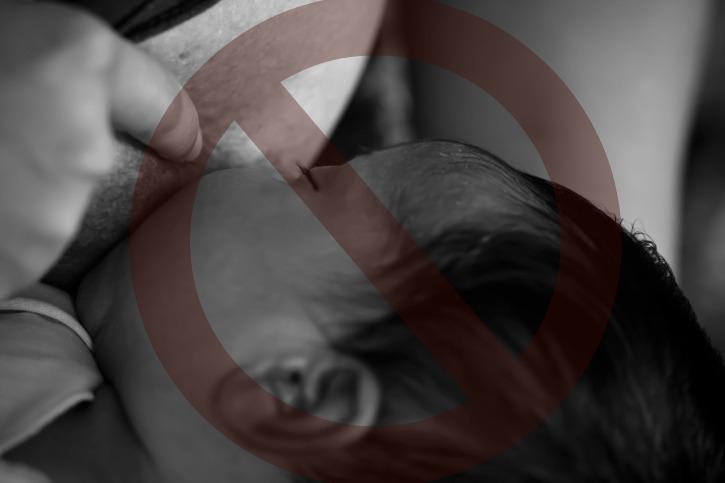 The Commander of an Idaho Air Force base has written a policy barring women from breastfeeding in front of others. Why are we still talking about breastfeeding discretion?

As of this morning, the Mountain Home AFB breastfeeding policy has been rescinded by Commander Iverson, with an apology (if a slightly veiled one).

But let's just wait to get our pom-poms out, because this announcement includes the following caveat: "The policy was not intended to ostracize anyone and I regret it had that effect.  I will revoke this policy while we look for a better way to accommodate and be respectful of all individuals in our community."

This is obviously (for now) a victory for the nursing moms and babies of Mountain Home, and for breastfeeding moms in other military installations. In the grand scheme of things, though, this is but a tiny step in the direction of normalizing breastfeeding across our country and the globe. Our work isn't done until I don't have to write another story about breastfeeding "policy," except in the event that the policy is, "Breastfeed where ever you'd like, whenever you'd like, however you'd like."

But for now, let's celebrate a little. Together we have the power to affect change. And that is beautiful.

Attention Civilians: Colonel David Iverson does not want to see your boobs.

The Commander of the Mountain Home Air Force Base in Idaho has written a policy barring women from breastfeeding in front of others. If you are going to breastfeed your baby, you'd better either do it under cover of darkness (a blanket, as it were) or in a designated nursing zone/office/private space. If none of those options suit you, you may take your baby and your breasts elsewhere.

I got a hold of Iverson's memo (first posted by Breastfeeding In Combat Boots), dated 16 April 2015, which looks like this: 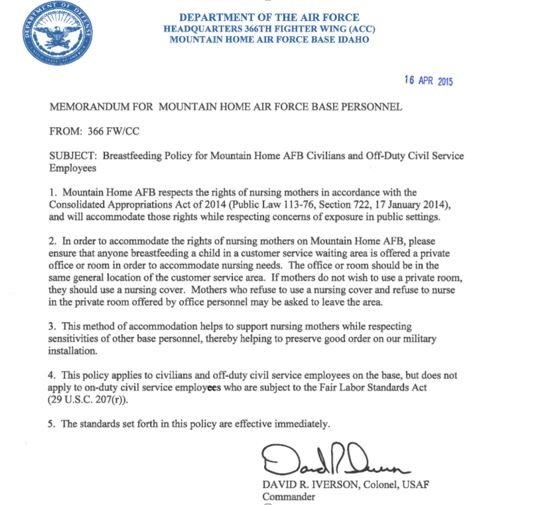 Saying you "respect the rights of mothers" but will "accommodate those rights while respecting concerns of exposure in public settings" is basically like saying, "I'm not a racist, I just don't like black people" or "I agree in marriage equality, just not for gay people."

Meanwhile, in Section 2, Commander Iverson would like to ensure that a mother be offered a private space, or office, in which to nurse. If said mother chooses not to accept the generous offer of a private space, and refuses to cover, she may be asked to leave. May I refer to my earlier suggestion? That is so thoughtful of you to let me use your office, Commander Iverson. Do you happen to have any snacks? Breastfeeding leaves me famished!

Seriously, I've been staring at at my blank Macbook screen for a solid 10 minutes, and am still shocked by what I'm seeing.

Why are we still talking about breastfeeding discretion?

Before we delve deeper into this United States Air Force "policy," let me offer a barebones overview of breastfeeding laws in our esteemed nation.

Federal law protects your right to use your breast anywhere, at any time, under any circumstance, to feed your baby on federal premises—including military installations. State laws on the subject, however, vary. In Idaho, the location of Mountain Home AFB, there are quite literally none. That's right: there is not one solitary law protecting a breastfeeding mother and her infant—who I might add is probably hungry. Ironically, Idaho also has the highest breastfeeding rate in the nation. Hats off, mothers.

Here's where things get a little convoluted. Federal law supersedes state law. That is, in circumstances where the two are in conflict, federal law automatically wins. So tap out, Idaho . . .  right? Not quite. Because here's where things get really confusing. Military bases are not subject to state law, but are governed by federal law, except in the event that the garrison commander/commanding officer of a military installation deems it necessary to issue new policy, as is allowed by U.S. Code Title 10.

To make sense of this all, I did what any logical person would do: I used a lifeline and called my grandfather, Leonard E. Giuliani Capt. Ret., who served in the United States Navy for nearly 30 years of his life. That's a long time and he was in charge of a bevy of important things, including court marshaling. Also, he still gets saluted and the front parking space, so I think he probably knows what's up.

This is how it went:

Me: Hey grandpa, doesn't federal law count on a military base? This Colonel at an AFB in Idaho made a policy that you can't breastfeed without a cover.

Him: Well, yes. But (oh, here we go with the but) a commanding officer has it in his authority to make a policy as needed or required, as he deems necessary.

Me: But this is about breastfeeding. It's just boobs. (This may be the only time I've said the word "boobs" to my grandfather, by the way.) Doesn't that seem a little extreme?

Him: *Humpf* Well I never did anything like that. That seems unusual. You should contact an attorney who specializes in military law. Your grandmother has been sleeping in because of her back. Can you come late morning instead of early tomorrow?

Him: See you in the morning.

And there you have it, straight from my 81-year-old Italian grandfather. I might add that I have five children, and I have nursed those five children over 10 years collectively, certainly in front of him a number of times, and certainly without cover. And he never enacted any sort of "policy" regarding my imprudence.

So to get back to my central question: why are we still talking about breastfeeding discretion?

Are we—and by "we," I mean Commander Colonel David Iveson of the United States Air Force and every other person in the world who thinks the sight of a baby nursing is abhorrent—so completely disturbed by the sight of a breast that we can't let a baby eat? Let's be reasonable. I have a Vogue magazine sitting right here (in the name of research, obviously), and there are no fewer than 17 breasts with more tissue visible than I would ever expose while nursing. (Unless the babe performs a tactical maneuver called The Abrupt Pop Off, in which case I would frantically yank down my shirt, lest everyone in the near vicinity be subject to a milk shower.)

What is the big deal, David? Oh, I'm probably supposed to call you Colonel or Commander or something. But I'm not in the Air Force and I'm not sure, so, David? What is it? Who are you worried about? Is the sight of two inches of breast so arousing to the young enlisted that you must protect their fragile sexuality? Are you concerned about the babies being part of some illicit scheme to corrupt the minds of the impressionable? Are these nursing mothers running about topless screaming, "I WILL NOT BE CONTAINED"?

I am asking this in earnest. Why override a clearly written (well, sort of) federal law that protects a mother's right to engage in an act that is so natural, so completely innocuous, that it shouldn't even require a law in the first place? Furthermore, why isn't anyone challenging this nonsense? Further furthermore, why are we even still having this conversation?

Could we be doing anything else? I don't know, is there maybe some other war you could work on besides the war on hungry infants?

If you like this article, please share it! Your clicks keep us alive!
Tags
military base
Idaho
breastfeeding
military
Air Force
laws
legal
exclusive 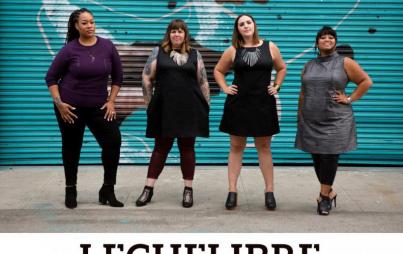 Edgy Breastfeeding Fashion For Rebel Mamas, Now In Plus Sizes