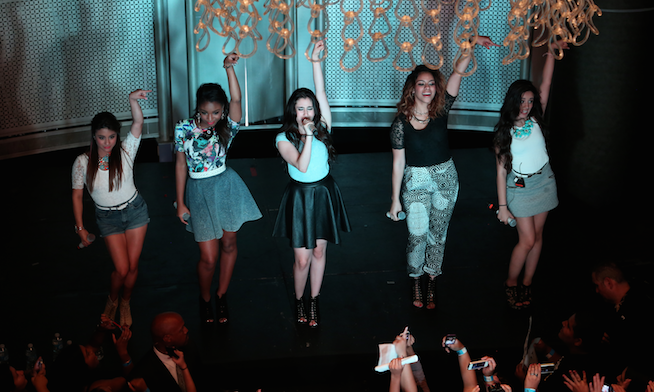 Fifth Harmony is nobody's idea of a roots band. As a reality-show-launched girl group, they've parlayed their initial platform on X Factor USA into moderate fame by embracing all the clichés of radio pop — from crazily slick production of videos with copious costume changes between the cuts. The single "Bo$$" from their 2015 album Reflection even features a fashion-show catwalk. You don't get much more enthusiastically, inauthentically unrootsy than that.

Part of what's so ersatz about the band is that they so desperately, and endearingly, want to be Destiny's Child. "Bo$$" references Oprah and Michelle Obama by name, but the real guiding force of the track is Beyoncé’s early 2000s girl-power anthems from "Bills, Bills, Bills" to "Independent Women" ("I pledge allegiance to my independent girls, in here" Fifth Harmony coos.)

For all their glitzy costume changes and up to the minute social media patter ("I ain't thirsty for no bae/'Cause I already know watchu tryna say") Fifth Harmony is resolutely derivative, and resolutely retro. Girl groups like the Spice Girls and DC and Danity Kane had a moment in the '90s and early 2000s, but that's past; the biggest stars now are all individual artists like Beyoncé and Rihanna who strut their scandalous individuality sans intricate vocal blend. In that context, Fifth Harmony almost comes off like a nostalgia act.

Which brings up the question—what's the difference, anyway, between a retro nostalgia act and a roots exercise? Yes, of course, bluegrass bands and blues bands don't rip off their sources the way pop stars do; instead, they self-consciously pay tribute to a tradition.

But then, it's hard to see how Fifth Harmony could be any more self-conscious or explicit about their debt to their heroines. The song "Like Mariah" cribs a sample from Carey's "Always Be My Baby" while comparing a particularly talented lover to Mariah's vocal performance. "Your lovin' takes me higher/you set my heart on fire/When you touch my body/got me singing like Mariah," they declare, before yodeling up into sort-of-whistle-note, faux orgasmic territory.

The ecstasy of love and of those great singers who sang about love are winkingly conflated, so that it almost becomes Mariah herself ravishing her devoted acolytes.  Similarly, on "Brave Honest Beautiful" the band assures its young female audience that each and every one of them is worthwhile by referencing divas past:  "You can dance like Beyoncé, you can shake like Shakira/because you're brave, you're fearless, and you're beautiful."

The compulsive nods to other superstars might be seen as a bit forced, gimmicky, or presumptuous, like the band is trying to grab hold of some other stars reflected glory. But the truth is that artists reference other artists all the time; if Waylon Jennings can appeal to country fans by name-dropping Hank Williams, then why can't Fifth Harmony cater to its audience by name-dropping Rihanna? Yet one is generally presented as honoring the tradition, while the other is chasing a fad (though Rihanna's been around for a decade now.)  Why is it rootsy to cite sources in one instance, and not so much in the other?

Disco pop has been around forty years or more at this point. And disco pop itself is merely an extension of slick Motown product; Destiny's Child called themselves the young Supremes for a few minutes before their success made the comparison superfluous.

Girl-group pop has been around for decades, but it still doesn't qualify as a tradition, because traditions are real and deep, and girl-group pop is shallow and fake. Girl group is a novelty act, no matter how long it sticks around.

All of which suggests that Fifth Harmony could be a roots outfit if you're willing to tilt your head slightly and let them be one. After all, why should references to rural honky tonks or dusty crossroads be more real or authentic than references to girl power or dating? When Fifth Harmony harmonizes enthusiastically about boys, self-esteem and selfies ("do you ever post your pics with no filter/hashtag #IWokeUpLikeThisToo"), aren't all those things real too?

If blues or country is about community tradition, then girl groups certainly are as well. The physical spectacle of a group of women on stage in itself serves as a metaphor for the link between stars and fans. The harmony between the singers is a promise that listeners and performers are joined in the music.

For Fifth Harmony, that group dynamic is also an embrace of history. It's a sisterhood that sings not just to sisters present, but to sisters past. "So whine like Rihanna/Go and pose like Madonna/ 'Cause you're brave, you're honest, and you're beautiful." A tradition of fabulousness is still a tradition. Whether you're strolling down that highway or shimmying down the runway, you're rooted in the footsteps of those that went before you.