My 6 Month Love Affair With Cocaine 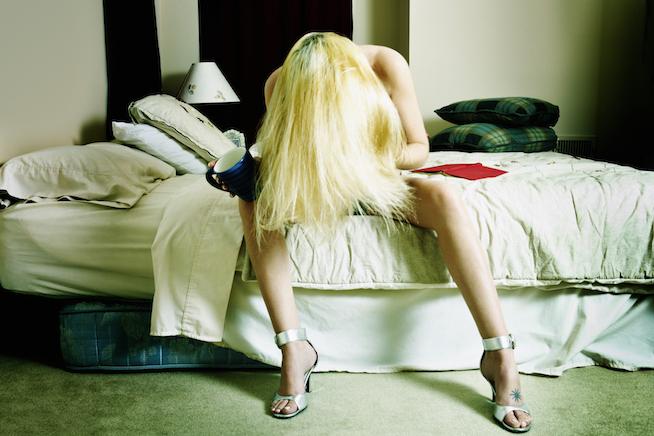 I'd go to bed at dawn and wake up at the next dawn. That’s when the pain would start.

There is a process, an art, to putting anything up your nose. . .especially cocaine.

Then I’d pour a bit of powder out on something flat by tapping lightly on the bag. A CD case will do, or a flat table without wood grain. I’d arrange the tiny mountain of powder into lines using my credit card and lick the edge — waste not, want not.

I’d take a straw I swiped from a restaurant, cut it down to a reasonable length, and stick one end into my nostril, while holding the other side of my nostril closed. Then I'd inhale. Deeply.

It feels like taking a shot of vodka or whiskey, only through your sinuses. There is a burn, then a slow drip down the back of the throat. And I can’t forget to eat first. I won’t once I’ve started, but I will want cigarettes and booze. And once I’ve started, I won’t stop for a long while.

For six months I was a heavy user, a big spender, the girl who let her boyfriend snort lines off her ass and tits. For six months, I fell into cocaine culture, and then, just as suddenly, I fell back out.

It began when an addict friend wanted to get rid of his leftovers. He was dropping out of college and, presumably, his Wall Street internship, to go to rehab and I was experimenting with pills and powders, most recently Molly. Cocaine felt like an experimental, dirty-glamorous lateral move.

For one thing, a line of Molly would last me all night. I felt the burn of the powder and knew that I was good to go for six hours. I’d still want many drinks and cigarettes, especially cigarettes. But with coke, a line lasted me only 20 minutes to an hour, depending on how big I cut it. And it was a needy son of a bitch too.

I could wait 20 minutes to an hour, but I didn’t want to. I wanted another line or bump within 10 minutes. Even writing about it, long after I’d sworn giving it up, makes me want a long, thin white line. It’s the nature of the beast.

The thing with coke is that it usually starts with a party. I have some coke, someone else does too, and everyone shares until it’s gone — or I make a call to my dealer. I talk more, share more, feel bigger, and laugh louder. The nights last forever. I feel the wonder and craziness of a sunrise sneaking up over the neighborhood, watch the early runners jogging past, and feel like I’ve been part of a special initiation.

I'd go to bed at dawn and wake up at the next dawn. That’s when the pain would start.

Coke tenses every muscle in your body, only you don’t notice while you’re on it. Your jaw clenches and your teeth grind in your sleep. Your shoulders draw up to your ears and your hands make fists without your telling them to do so.

I’ve woken up feeling like I’ve been hit by a truck, like every bit of powder cemented itself into my joints. I’ve taken a line too many and been unable to fall asleep, instead vomiting and shaking on the bathroom floor while the party continued outside the door.

Eventually, I got so tired of the constant, jerky speed and intensity that the party needed to stop. I want nothing more than for it to stop. After six months of funding my soft-spoken dealer’s son’s college education, I quit cold turkey. I flushed the last of my stash down the toilet and never looked back.

I luckily had no withdrawal symptoms after six months of 50 to 100 dollars of nightly partying, sometimes alone, sometimes in a pair, sometimes in a crowd. I got out as easy as I got in and I’m thankful.

Some don’t get out so easy, some never get out at all. I’ve left behind many who still succumb to the power of powder.

I can only be thankful that my path led away from the CD cases, credit cards, and crusted-up straws. For some, it can be an occasional whimsy, but for me, it was an infatuation. And as we all know, infatuations always come to an end.

If you like this article, please share it! Your clicks keep us alive!
Tags
Cocaine
addiction
cocaine abuse
cocaine addiction