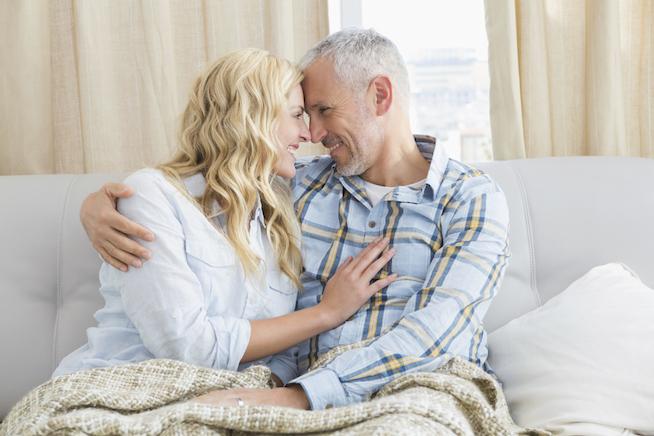 We're not all gold-diggers.

Older men hooking up with younger women get a bad rap. For example: The stereotype is of a man who dumps his faithful wife of 20-plus years and goes after the younger model. And on the other hand, any woman who prefers older men must be looking for someone to take care of her.

Wrong. (OK, sometimes completely true. But for women like me, dead wrong.)

I'm not looking for some kind of Sugar Daddy. I don't want to get tangled up with a mid-life-crisis-leave-your-wife man. I've always been attracted to older men, and now that I'm in my mid-30s, my man is in his 50s.

Why? Because some of us just prefer older men and for some damn good reasons.

1. He has more patience. I know I have more patience now than I did 10 years ago. The same is true for older men. That gotta have it now, don't make me wait sense of urgency is long gone. The older man looks at the conquest of a new relationship (or any new goal) as a long-term game, and he's willing to wait and work for it.

2. Older men are more mature. Petty squabbles over who ate the last of the cereal, was that guy looking at you in the club? and whether a 401k is really necessary when the mountain bike is more fun — yeah, those don't happen as much anymore.

3. Stability is sexy. He's got a job. He's earning money and paying his bills. He probably owns his house or rents a decent apartment. There's something to be said for knowing that a man is stable and taking care of himself.

5. Being a gentleman is part of his nature. Holding doors for you, picking up the heavy stuff, and helping you out is something he does automatically. He doesn't do it because he thinks you're weak. He does it because it's polite — and he knows how to show you he cherishes you.

6. Those extra pounds don't matter. He's not the same size he was in high school, and he knows you aren't, either. He wants you to be healthy but older men like a woman who can enjoy life whether in the form of a good steak or a three-scoop ice cream cone. He may say he likes to have something extra to hold on to at night. Let him.

7. He's comfortable in his own skin. You know all those insecurities you still have about the random zit, weird chin hair, and sagging tummy? Yeah, he's had his version of those things, too. And he's over it. Older men wear what they like, do what makes them happy, and figure the rest of the world will just have to deal with it. Confidence is sexy.

8. He shows respect. Older men aren't airing your dirty laundry on social media, telling all their buddies how good you are in bed, or treating you like an idiot in front of your friends. You're his partner, and he will treat you with respect in front of others. Merciless teasing when it's just the two of you is always a possibility, though.

9. Drama is not allowed. There's no baby mama drama (remember that respect thing?) from him. He's not picking a fight with you in public and shouting at you isn't an option. A mature older man doesn't have time or energy for drama.

10. Your pleasure comes first and often. With an older man, your pleasure is top priority. After years of practice, he knows his way around the female anatomy. He may help you discover parts you didn't even know you had. (I'm looking at you, G-spot.)

No man is perfect but those of us who prefer a mature man know they offer something our contemporaries just don't have. Not yet, anyway.