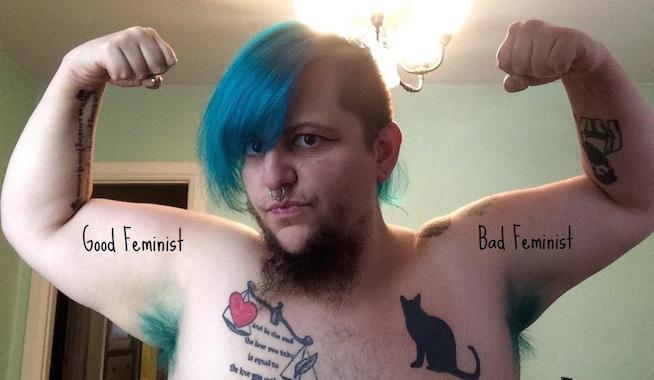 Why policing “good” and “bad” feminism in the name of critique doesn’t fix anyone’s insecurities or boost anyone’s morale.

To many people, I’m a mystery: a “seemingly” feminine woman who insists on not shaving her beard, a supposed intelligent and well spoken woman who chooses to forego the office for a circus sideshow stage, and an apparently artistic and talented woman who chooses to sing her opera not in a concert hall but in dimly-lit bars in various stages of undress. I encourage, on a regular basis, women to love themselves, own who and what they are, and find the look, identity, and life that makes them happy (so long as it does not further marginalize, exoticize, or oppress already marginalized people).

I’m also a chubby woman who is rendered anxious and triggered by being called “fat.”

Therefore, in the many progressive spaces I inhabit, both in virtual space and meat space, the question is often posed: Is Little Bear a “good” feminist or a “bad” feminist (and is the other option a feminist who’s had a blown-in-from-Kansas cabin drop on her)?

I was recently solicited online, albeit kindly, by someone trying to tell me about some sort of wrap that "blasts" (what does that even mean?) cellulite. I asked, in genuine, legitimate, curiosity: "What's wrong with cellulite?"

They were too stunned to answer outside of a hesitant, "Well, wow. Not many people think that way. Kudos."

It's funny, and kind of confusing.

I'm often lauded by people for "owning" and reclaiming things that we're taught are "wrong" when on women — my facial and body hair, namely, but also things like stretch marks, oily skin, cellulite — and even lesser things like my height (or lack thereof) or my (lovingly coined) "linebacker" bone structure and strength. But sometimes — and probably because I take my clothes off in public, this the assumption is easy to make — it's also assumed that I own everything else about me too. And I wonder if those people know that I have almost daily crying fits (I know, I know...) about my breasts and my body shape, size, and weight.

It further complicates things when body activists, doing the "good" feminist thing by calling into question the root of my choices and feelings, only serve to rob me of my autonomy by accusing me of only feeling this way because "society tells me so."

And it complicates things EVEN FURTHER when I have posed that same criticism (if not full-on accusation) towards women who suffer with and hate their body/facial hair the way I hate my body shape.

In the end, it’s not so easy to decide what's genuine, what's societal, what's ingrained, what's learned, what's temporary, and what's permanent. That I'm a woman who, ideally, would like to be 30% thinner and 30% hairier I suppose will just remain a mystery to most straight-forward thinkers.

This of course ties into the larger issue of becoming "public domain" to anyone with an inch of opinion. This includes second-wave dreck such as, She shouldn't have to take off her clothes for attention and the gee-golly concern of, OK, I get the 'quirky' thing, but this hair color is too much, etc.

But when it comes to trying to lay claim on what is "good" and "healthy" for me, the line feels blurred.

This is why in the past I have — unsuccessfully — tried to gently imply that the trend towards criticizing what we've deemed "choice feminism" is not without fault. Because at what point does skepticism become accusation?

Is Just because you think it's feminist doesn't mean it is any LESS hyperbolic than Just because you don't think it's feminist doesn't mean it isn't? Is "empowerment" a black-and-white, completely objective, blueprint idea? If the world told me that I would never land a career, a love life, or happiness as a woman with a face and body covered in hair, is it not empowering (and to a degree, feminist) for me to flip them the bird, grow it anyway, and prove them wrong?

If that SAME WORLD (many of them men) told me Once a fat chick, always a fat chick, because women just don't lose weight as well and aren't meant to be strong like men are, is it not just as empowering (and, yes, to a degree, feminist) for me to flip them the bird, lift and lose weight anyway, and prove them wrong?

And when I start to internalize, resent, and seethe over women bemoaning their "gross" and "manly" facial and body hair, can I avoid putting my foot in my mouth and keep from critiquing (read: accusing) them (though I will fight tooth and nail to remove "manly" as a knee-jerk response to hair anywhere below the eyebrows)?

And in our inherent obtuseness, we fail to see the differing perspectives and journeys of our fellow women.

But let's employ a little distance and self-awareness before we DECIDE on the behalf of others.

There are enough people out there telling us we're doing womanhood "wrong."

Let's not do it to each other. 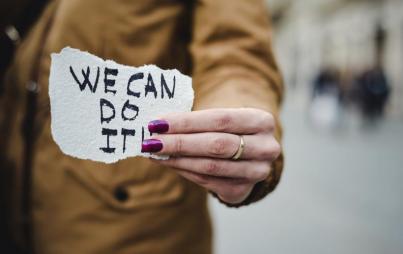