What It's Like Being A Sideshow Performer — On And Offstage 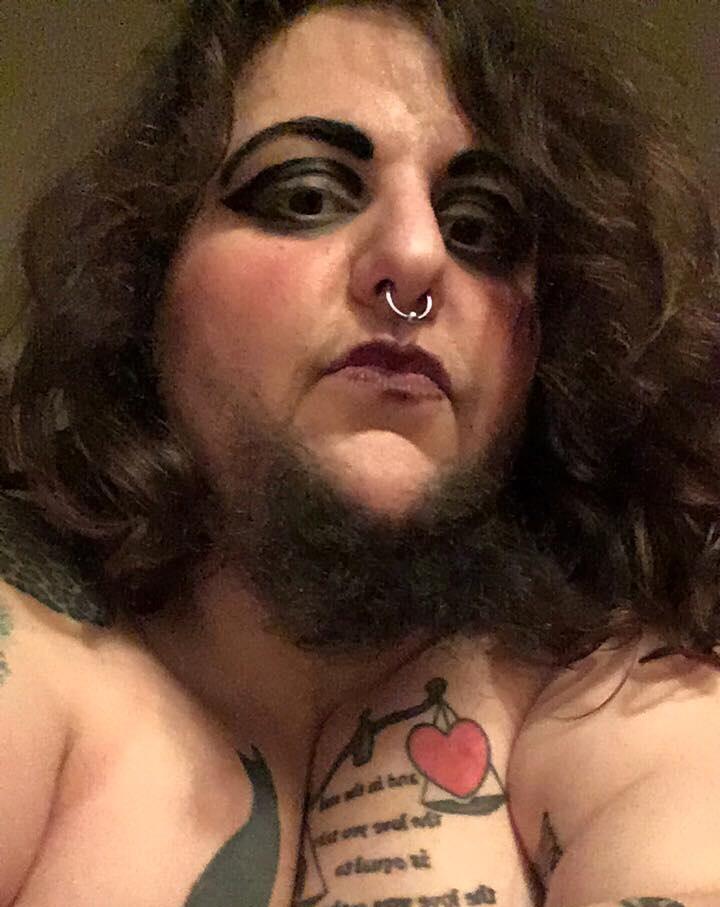 I kid you not: I once walked past a dude with a trendy “old-timey” bearded lady tattoo, rocking what was clearly a “sideshow aesthetic” — top hat, red & black stripes, epaulets — and he turned around and audibly uttered, “eww.”

It was one of the greatest moments of mind-boggling cognitive dissonance I’d ever experienced, and trust me, as a Bearded Lady, I experience a lot.

I’m no stranger to men telling me “I’d never fuck her” and “I’d *actually* fuck her” (two sides of the same coin) in response to articles about me that had nothing to do with fucking. I’ve had fellow women with Polycystic Ovarian Syndrome who shave their faces in shame until they’re raw tell me my acceptance is setting a “bad example for girls.” I’ve had Drag Queens who rock the “Bearded Lady aesthetic” (there’s that word again) chew me out in private messages because my use of the term bearded lady “ruins the joke” and “appropriates THEIR look.” Yeah.

But this was unique in that it wasn’t just fragile masculinity, internalize misogyny, or a wildly misapplied understanding of “appropriation.”

This, I realized, was commodification.

Between American Horror Story: Freakshow, Carnivale, The Vampire’s Assistant, and, most recently, The Greatest Showman, “Sideshow Chic” has slowly become A Thing™ over the past 10-15 years. Most people don’t realize that this resurgence is in part due to the return of *actual* sideshows as an artform after a 50-odd-years-long period of dormancy.

Troupes like Wreckless Freeks, FreakShow Deluxe, Hellzapoppin Circus Sideshow Review, Circus Amok, and many more have exacerbated this trend, but yeah. Visibility is visibility.  All press is good press — sort of.

What do those shows and movies have in common, aside from the fact that they all feature bearded lady characters?

That’s right — none of those characters are portrayed by actual bearded women.

If we talk about the erasure that is white-washing characters of color, cisgender actors “bravely” portraying (often antiquated) roles of transgender people, and “Oscar Baiting” with biopics about characters with mental and physical disabilities, then we also need to discuss both the erasure and unchecked, foolish irony of casting NON-sideshow freaks (a word which, by the way, many people have reclaimed, myself included) in media whose chief M.O. is bring to light the existence of living, breathing sideshow freaks.

(And before anyone starts: Tod Browning made Freaks in 1932, with ACTUAL sideshow performers. Not to mention, I was cast in the STARZ sitcom “Blunt Talk” two years ago when the Casting Director was looking for authentic bearded women. So consider your, “Well maybe they don’t know you’re real!” card to be trumped!)

So the result, therefore, is a culture of “fans” considering us Sideshow Freaks — bearded ladies included — to be “neat” and “fun,” but not actually real. Enter: Mr. Cognitive Dissonance who thinks nothing of his Ol’ Timey tattoo, but a whole lot of me.

His follow up, by the way?  “Well, I like unicorns too, but if I saw one on the street, I’d think it was pretty damn weird.”

And there you have it.

I don’t care how “inspirational” or “brave” or “fun” or “unique” you find these characters to be in their sepia-tone filters and frilly bustles. I want to know what you do when real, living women in 2018 like me are accosted at bus stops, shared as memes on Reddit, and “discretely” pointed at on the street.

We don’t disappear when the movie ends.

That said, if it was my hope to find commiseration with my fellow performers, I would be met with a painful reality.

Those who know me know that I like to talk about occupying what I call “Liminal Space.” That is: when your identity is as such that the status quo-based Right sees you as too fringe, but the social Jjstice-based Left sees you as too advantaged. It’s a weird, nomenclature-less blend of privileged and oppressed that no one on either end knows what to make of.

I inhabit this space in almost every facet I embody: I’m cisgender, but by way of long questioning my gender. I’m heterosexual, but by way of experimenting for many years. I’m a Christian, but by way of searching several other religions first. In all of these cases, both sides of the spectrum push me onto the other — like two fighting parents trying to pawn me off onto their spouse. Relating to many, claimed by none.

So it should come as no surprise — but a whole lot of disappointment, nonetheless — that The Sideshow Community has treated me with almost as much vitriol as every non-freak who “eww"'s and “yuck”’s my photos, my face, my very existence.

The dilemma?  I’m not “A Real Freak,” due to the fact that (get this!) my physical anomaly “is easily hid or treated.”

Never mind that Bearded Ladies are A SIDESHOW STAPLE and have been for as long as anomalies have been monetized.

Never mind that beards aren’t a one off-deal, and require DAILY maintenance to “hide.”

Never mind that many people with Polycystic Ovarian Syndrome historically don’t respond well to laser therapy as a permanent solution.

Never mind that waxing is expensive, shaving daily is painful, and the act of hiding oneself on the whole is emotionally taxing and laborious.

But on top of that, if I HAVE TO HIDE my natural appearance in order to fit in?

Guess What? That means my anomaly is legitimate.

I will never know what it’s like to live with — in both physicality and stigmatization — conditions like Microcephaly, Amniotic Band Syndrome, Seckel Syndrome, Phocomelia, or the many other conditions sideshow performers have embraced and celebrated as part of their sideshow (and everyday) identity, particularly after sideshows’ and freakshows’ notorious stigma for only being a source of exploitation and degredation. Nor would I be in my lane — or rightfully, any lane at all — to tell them their affliction “isn’t real” or “isn’t valid” simply because I do not experience it.

You Might Also Like:  A 23-Year-Old Woman From Wisconsin Is Auctioning Her Virginity And I Am Here For It

Yet in my three and a half years with sideshow, my own time with my “freek family” (Wreckless Freeks excluded), I’ve experienced an exorbitant amount of “you don’t COUNT”-ism (a condition that SHOULDN’T be claimed or RE-claimed by anyone) from fellow Sideshow Freaks who suddenly forget that our culture is not a Finite Resource, nor a Zero Sum game.

We’re not in competition. This should be family.

Furthermore, if I don’t know what it’s like to live life the way they do, the same could be said vice versa. Unless you’re a bearded woman? You don’t get a say in what we ARE or ARE NOT. In other words, “Gooble Gobble, we don’t accept her, not one of us.”

Tod Browning would be ashamed.

So in the end, being a bearded lady probably reads like a thankless gig. “No Thanks”ed by entitled men, self-loathing women, The Status Quo, Social Justice Warriors, sideshow aficionados, and sideshow freaks alike. It’s lonely. Not lonely in the “I want to be accepted and popular!” way — or at least, not more so than anyone else, as we are ultimately a social & ego driven species.

My therapist put it best, if bleakest: “I don’t think you’re meant to have one. I think you’ve been dealt with the task of having to create your own.”

If I let my critics win, let them pummel me into believing I’m a Unicorn, An Un-fuckable, A Bad Role Model, or a Faux Freak when I know none of the above are true, I am putting out a very dangerous message. I am letting them know that my self-identification, my reclamation, and my autonomy to surround myself with those who see me as a Real, Living, Modern, Dimensional person are secondary to softening my hard-earned edges to fit my peg into the round hole of someone else’s limitations.

I am not here for people who tell me what I am not.

I am here for the pegs.

I am here for the unclaimed.

I am here for the people who embrace who they are in the face of people who tell them not to.

Tod Browning would be proud.

If you like this article, please share it! Your clicks keep us alive!
Tags
sideshow
bearded lady
freak
gender
expression