6 Things I Learned From Heartbreak And Financial Ruin 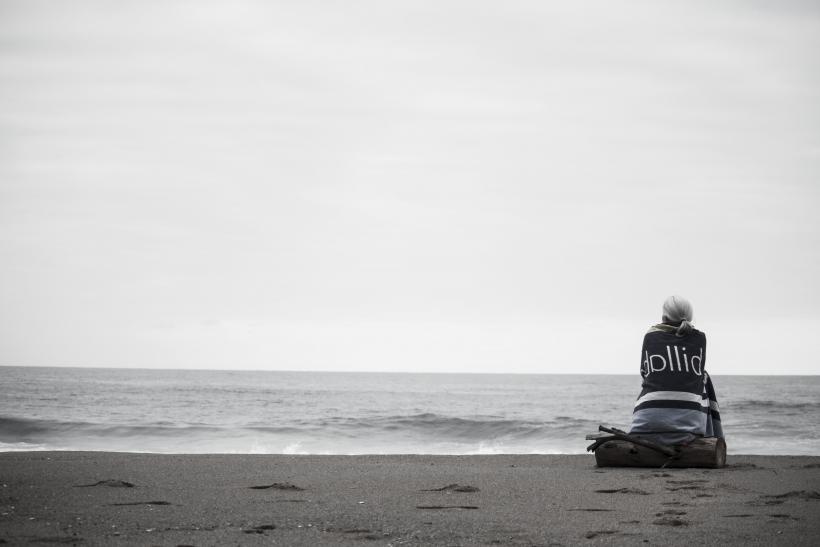 I was tenuously and civilly cohabitating with the man I still pined for. I was looking for work, looking for rooms to rent, and finding ways to cope — and then I unraveled.

I have a wide network of well-known artists and performers, a dozen published articles, and a fan page of 6,000+. I often get stopped on the street by people who thank me for my visibility and my voice. When I perform, the audience explodes with applause.

I am also currently without my own home or a steady job. I live in my best friend’s living room on a blow-up mattress, surviving on the residuals of a GoFundMe campaign, plasma donations, and stray writing and performance gigs. I don’t make enough to afford an apartment — or even a room — in this city.

I want to make clear that my situation is far from dire. I have a best friend with whom to live. I have a little money to get me by. I have an amazing therapist covered by insurance. Food stamps keep nourishment from being a concern. Even when the money runs out, there is a good chance my friends will not let me end up on the street.

The big tragedy is how this happened, and how, in a way, I allowed it to.

I spent my first two Seattle years in a bit of a bubble. Flown in by a partner who could afford to encourage and patronize (in a good way) my dreams, I ceased having to worry about money or security. My biggest concerns became making sure the dishes and laundry were done. If the roles felt gendered in the beginning, the idyllic nature of getting to wake up when I wanted soon eclipsed any guilt.

Free from a 9-5, I grew out my beard, and with it, took on a new career as a sideshow performer, singer, and burlesquer. At a leisurely pace, I blossomed as an artist. But without any sense of urgency or independence, I stagnated as an adult.

The relationship worked — until it didn’t. There is no melodramatic arc about infidelity, or fraud, or abuse. We were just two people whose priorities, philosophies, needs, and romantic expectations began to schism. Even following a series of arguments, our dissolution was a mutual decision. Even in tears, it was amicable.

In a sense, that is part of the tragedy: I had no injustice on which to fall back. I couldn’t be propelled into anger or empowered by moral superiority. I couldn’t rationalize the situation by vilifying him. I had to somehow reconcile the fact that he was both my Prince Charming and The One Who Got Away. It was both beautiful and destined to end.

However, I did not have the luxury of immediately coming to this epiphany. Along with the relationship, I was about to lose my home and my financial security. I had no time to grieve once panic stepped in and took over.

However, I was far from a victim. I had two years to squirrel away the earnings I had made through performing and writing. I could have lit a proverbial fire under my own ass and tried to earn more. That’s the problem with comfort – you don’t want to move.

Post-breakup, I held it together for a little over a week. I was tenuously and civilly cohabitating with the man I still pined for. I was looking for work, looking for rooms to rent, and finding ways to cope — and then I unraveled. The building pressure of trying to find security and a future on my own, compounded with my heartbreak, caused me to snap.

I hospitalized myself for suicidal ideation and spent a few hours in a white room. Under the social worker’s strict orders, I moved into the aforementioned living room of my patient and supportive friend. My old home was now branded as “toxic.”

Thereon, the tenuous civility came to a halt. Palpably spooked by the magnitude of my feelings, his reception upon my visits to go pick up belongings became terse at best, irritated at worst. My grief caused me to be maudlin and needy; for him, cool and reserved. Every visit became as painful as our dissolution.

In the outside world, things fared no better. I had a brief stint as a fill-in sex educator at a local boutique, but they let me go for just being too sad and too anxious to properly do my job. I couldn’t effectively help other peoples’ love lives with the obliteration of my own.

My taxes resulted in, for the first time, owing money vs. receiving, putting me deeper in the hole. Moving out of the living room feels further and further away. Seattle’s rising cost of living (just as with San Francisco and Brooklyn) and my dwindling savings makes room searching seem futile. Being a woman with a beard makes employment sketchy, but I know that shaving it after all the liberation, notoriety, and visibility I’ve received would probably be emotionally and mentally detrimental. I keep it on the back burner as a worst-case scenario.

I said my final goodbyes to my old home and my old life this weekend. I put out the offer of friendship. The ball is in his court now. I’m running on the fumes of the kindness and generosity of friends and family, and therapy.  What’s weird is that, somehow, I know I will land on my feet.  I just don’t know when.

I want to give you a happy ending, a “happily ever after.” I don’t have one yet. But in lieu of that, I can tell you what I’ve learned:

1. Aim for independence. Much has been written about the internalized misogyny (and classism) of shaming women who are financially-reliant on their partners. This is true. Sometimes, we don’t have a choice. I had a choice. For all my guilt about being dependent, I just as much settled into the lifestyle of being carried.

Don’t be carried if you don’t have to. I had two years to realize this fairy tale might someday end. If you are in a position where you can squirrel away money, squirrel it. If you can earn it, earn it. Allow yourself to be pampered, but be aware of when and if the proverbial spa closes. It will ease your transition into self-care much more smoothly.

2. Good relationships and bad relationships have nothing to do with their length — only what transpired in their duration. Despite eventual incompatibility, there was a lot of love, a lot of laughs, and a lot of good memories. For many of us, that seems incongruous with a breakup. Breakups are what happens to “bad” relationships.

To risk getting “woo,” the people who touch your life do so with a purpose, a time, and a place. He helped me get to Seattle, allowed me bodily autonomy, and supported my venture into the arts. He did what needed to be done, in the time it was needed, and now that chapter is simply done.

3. You’re going to get A LOT of advice about “staying positive.” Please remember to allow yourself to feel. There is a fine line between positive thinking and repression — between rising above fear and being forced into smiling. It is OK to be angry. It is OK to grieve. It is OK to worry about the future. You need to exorcize these feelings by feeling them, otherwise they will continue to haunt you. You can’t pretend they don’t exist.

4. …But don’t let it consume you. I’m not going to lie! The slope between honoring your grief and living there is a slippery one. I myself am still figuring out where that line is. What I can say: Wallowing and worrying, if nothing else, is time-consuming and energy-zapping. With that same time and energy, I can acknowledge that pain, take a deep breath, and do something productive with it.

5. If you have friends who offer to help, take them up on it! You’ll soon find the dividing line between fair-weather friends and true ones when you start taking their “Let me know if I can help!” at face value. It’s easy to respond with, “I don’t know” or “You can’t.” Swallow that pride and think. Are they good at budgeting? Do they have a big comfy couch? Are they good cooks? A good shoulder to cry on? Let them help you. If you don’t have to go this alone, don’t.

6. Write things down, but don’t hit send. You see how calmly and rationally I was able to describe our relationship and subsequent breakup earlier? Yeah, that was born out of a lot of seething anger and sorrow that I had to first face.  I wanted to tell him I was angry — for taking the apartment, the cat, and living securely while I was left in financial ruin and pain. I wanted to tell him I was sorry — for everything I ever said wrong, for every fight, for everything ever. I wanted to beg him to tell me I was still lovable, still talented, still valuable.

My few attempts at going there were unsuccessful. Why? Because when the relationship is over, what's the point? That sounds harsh, I know. Your feelings are valid, but they don't always result in effective change. Write long letters about how angry, remorseful, stilted, and terrified you feel. Write all the things. But don’t send anyone those walls of text. They only serve to beat a dead horse.

Here is my obligatory “But it’s not easy,” because it’s not. Furthermore, when compounded with dealing with depression, anxiety, PTSD, and codependency (all of which I suffer with), these sentiments can easily read as grossly ableist.

“You can do anything! Just try harder!” That isn’t helpful. The reason I can confidently give you all these guidelines is because I’ve dove head first into doing the opposite — numerous times — and regretted it deeply. So, I simply suggest, just try — or try to try.

I don’t know where I’ll be living or what I’ll be doing in a month. Fuck, I don’t even know what’ll happen in a week. I can’t even say, “Things can’t get any worse,” because they always can. Dippy as it may seem, I have to grip onto those inspirational quotes for dear life. A favorite of mine is the Mexican proverb: “They tried to bury us. They didn’t know we were seeds.”

I can let this onslaught of misfortune bury me. Or I can grow from it.  Now, as I did then, I have a choice. If I want to assure that these past two years were a learning experience, I should be aware of my choices and choose wisely. 33 is not too late to learn.

If you like this article, please share it! Your clicks keep us alive!
Tags
breakup
relationship
finances