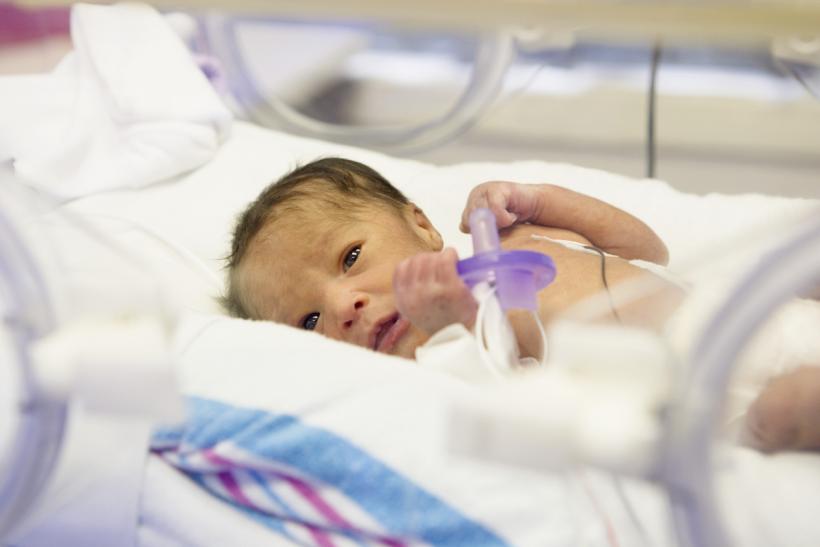 The scale isn't the best indictor of health — no matter how old you are.

The turmoil I felt each time I laid her on the scale brought back years of my own disappointment.

During the first weeks of my daughter’s life, I was obsessed with the scale.

I went to the pediatrician every three days, and I held my breath as the nurse weighed my writhing daughter. I'd close my eyes and pray she had gained an ounce, but her weight stayed stubbornly the same. My quiet sniffles would join in with my daughter’s shrill shrieks as I scooped up her tiny, naked body and walked away from the scale, embarrassed, upset, and desperate.

I dutifully accepted our ever-more complex routine, sacrificing bits of my sanity along the way. I would carry my tiny baby home and spend the next three days preparing for our next trip to the scale, hoping my daughter would gain weight — even the tiniest amount.

Having a baby who was too small was a problem I never anticipated having. When I was pregnant, I didn't buy any newborn clothes, instead skipping right to the next size. I was my mom's first and smallest baby at 9 pounds, and I certainly hadn't been small since.

Before I got pregnant, I had finally accepted that despite eating well and exercising, the scale just didn't want to move for me. I learned to accept other indications of my health: how fast I could sprint, how long I could hold a plank, how much I could lift.

And yet, here was my 7-pound daughter, challenging my beliefs and dredging up feelings with which I was intimately familiar.

The turmoil I felt each time I laid her on the scale brought back years of my own disappointment. In my attempts to lose weight I would change my routine, trying whatever wacky tactic someone suggested — anything was worth a try to see results.

I had finally let go of the scale as an indicator of my own health, but my inability to do the same when it came to my daughter was bringing up the same old feelings of inadequacy and frustration.

Not for the first time, I pushed aside more important things, focusing solely on my quest to change the number on the scale. For me, it meant boot camps twice a day — at the expense of family time. For my daughter, instead of catching up on sweet sleep or self-care during the raw first months of motherhood, it was a non-stop cycle of nursing and pumping. For myself, I bought into the latest diet craze; for my daughter, I skimmed the fat off my extra milk to add to other food — anything to give her extra calories.

And yet, in both cases, I walked away disappointed, weigh-in after weigh-in, week after week, year after year.

“Is she meeting her milestones?” my lactation consultant asked me.

In response, my daughter lifted her tiny head off my chest and cooed. Despite her slow growth, she was an alert infant who hadn’t shown any delays.

“Then why are you so worried about the scale?”

Why was I? I had finally let go of the scale as an indicator of my own health, but my inability to do the same when it came to my daughter was bringing up the same old feelings of inadequacy and frustration.

“Somebody’s baby has got to be in the lower percentiles,” a wise friend told me when I mentioned my distress that my daughter had dropped below the 10th percentile for her age and weight.

My friend’s simple observation helped me shift my perspective.

Despite the number on the scale, my daughter was happy and healthy. Despite my numbers, I am too.

If you like this article, please share it! Your clicks keep us alive!
Tags
scale
weight
weight gain
baby
body positivity