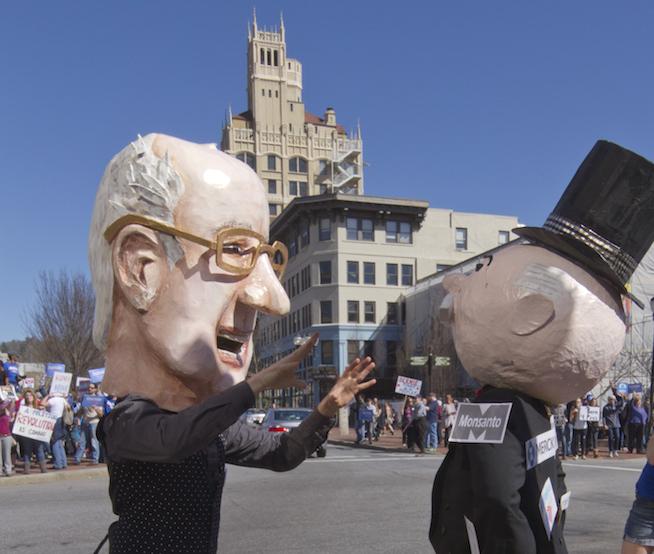 The 2016 election has, for a while now, felt eerily akin to 1984 (lots ‘o doublespeak coming out of Trump and his supporters). Or The Hunger Games, to take a more recent example of dystopian genre fiction. Wherein, government becomes solely about politics and the media spectacle, rather than actual policies and ideas.

Example: President Snow Donald Trump loses a debate and/or loses control at one of his ubiquitous rallies.

Amazingly, most members of the press continue to fall for Trump’s childishly obvious tricks. There are plenty of conspiracy theorists to yak your ear off as to why, but I subscribe to a modified Hanlon’s razor:

Never ascribe to malice that which can be explained by ignorance celebrity-worship.

Anyway, after yesterday’s voting in Utah and Arizona, Trump went 1 for 2. He lost in Utah — big time — to Ted Cruz, but managed to win in Arizona. Delegate count is now 738 for Trump and 463 for Cruz, with 1237 being the magic number needed to win the Republican nomination outright.

On the Democratic side, Clinton won in Arizona, but was completely blown out by Sanders in Utah and Idaho, with him winning 80% and 78% of the votes, respectively.

Those are major, major wins — much larger than any victory Trump or Clinton has posted… the enthusiasm seems very much with Bernie.

Still, considering the increasing likelihood that a major party is set to nominate a known and vocal jackass, and considering the horrors of Brussels yesterday (and no, the connection between the two is not lost on me, it’s just a woefully pitiful connection), I thought we could take a look at some of the hashtags this election has produced.

Let’s have some fun, folks.

In the wake of all the violence at Trump rallies, tweeters took to Twitter with the hashtag #SaferThanATrumpRally to highlight and mock the security perils of The Donald’s supporters.

According to Cision, the top hashtag of the campaign season thus far is #FeelTheBern. That would be, Bernie Sanders. Though there are some ways of interpreting this notion that are not exactly positive (er…), Sanders and his supporters have embraced it.

For Republicans and conservatives who wanted to express their undying disgust with their party’s presumptive nominee, #NeverTrump became a kind of Twitter therapy. And a reminder that while a good chunk of the country has abandoned its mind (and heart!), a slightly larger chunk has not wholly walked away from theirs…

#ImWithHer has been the one Clinton hashtag with staying power, and its straightforward lack of punchiness encapsulates much of what both draws supporters to Hillary and what turns others off. There’s a lot of experience; there’s also a lack of excitement.

John Oliver devoted his entire show to Donald Trump a few weeks ago, and signed off with the #MakeDonaldDrumpfAgain call to action. Oliver’s takedown included the fact find of a Trump ancestor who found it prudent to change their last name from Drumpf to Trump.

It’s been my personal favorite, if only because it also highlighted the ludicrous length of Trump’s most successful hashtag to date: #MakeAmericaGreatAgain. Look, when you’re limited to 140 characters, brevity is of the essence. Trump and his supporters?

Because he does soak up so much media attention, that the majority of hashtags revolve around Donald Trump should not come as a surprise.

As someone who follows an array of folks on Twitter, I can tell you that many of Trump’s online #TrumpTrain riders have a nasty penchant for, well, going nasty. Much like their beloved leader.

One thing this campaign has shown is how difficult it is for anyone to get out from under the steaming crap pile of Trump media coverage.

So if you’re a reporter, or you know one, or perhaps you’re quick-witted and have a Twitter presence, maybe we can all agree to stop with the Trump obsession, and find some cheeky ways to promote the candidate we are FOR, not just the a-hole we’re AGAINST.