How Depression Improved My Body Image 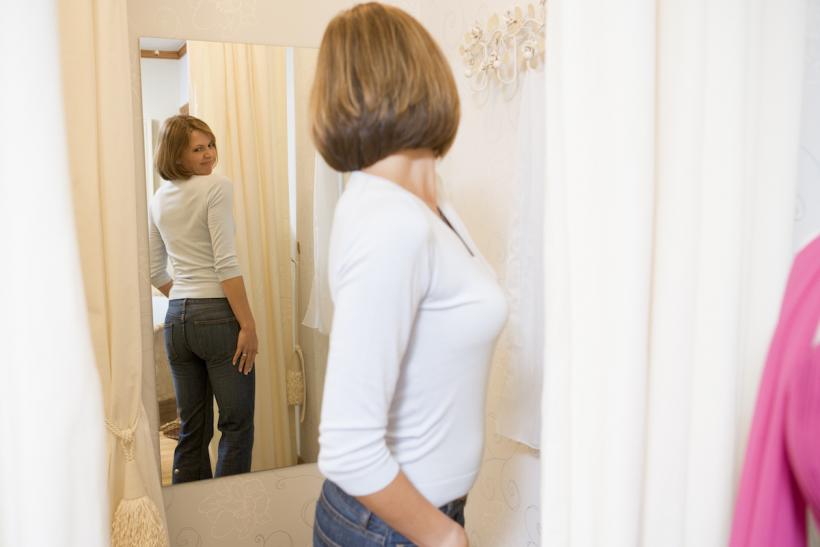 I was born into a family of petite, rail thin, willowy, and slender women. A whole lot of size zeros, twos, and fours fill our family portraits. In fact, my sister, who has birthed two children by the way, is actually attempting to gain a little weight right now.

I keep telling myself that 30 will come for her too.

You’d think that perhaps some more reasonable sizes would marry in, but alas my two brothers married women who fall nicely within this female familial trend. There’s always one though, isn’t there?

I have an ass that won’t quit and a little extra flesh softening every other inch of my body. On top of that, I married a man who loves nothing more than to solve all my problems with food and is constantly wondering aloud if we should get milkshakes after the kids are in bed.

The truth is, I’m a fairly average­-sized 33-year-old woman, if slightly heavier than I could stand to be. When I am out and about in the world, I feel comfortable in my own stretched out skin about 90% of the time, which is pretty good considering I’m a woman with eyes and an overly sensitive finger on the beat of cultural expectations.

But when I’m in the company of family, my strongly held beliefs about positive body image, my carefully honed confidence that I am more than numbers on a scale, my uncompromising rebellion against the patriarchy and its arbitrary rules for women’s sexuality, crumbles into a fine dust that blows away with one heavy sigh.

With the introduction of antidepressants, I gained more than my health back. I gained my life. I also gained twenty pounds.

A few years ago, I was one of the skinny girls. Dropping to a weight I hadn’t seen since before my four children were born, people noticed. I received comments and a few sarcastically jealous remarks from my other postpartum friends. And ;best of all, the boot­ cut jeans from 2006 that have been hanging in my closet unworn, slipped on without producing a muffin top.

Over the course of that terrifying year, I was sent to oncologists, immunologists, cardiologists, rheumatologists, and in the end it was a general practice doc who figured out that I had contracted two fairly common, but particularly virulent, viruses at the same time, and that my health had spun out of control from there. By the time I was sitting in his office, I’d already begun to physically recover but my mental health had declined to a point that had me and my husband scared.

The good doctor put a gentle hand on my shoulder and looking me in the eye, told me it was going to be okay, that anyone who’d been through what I had, would be in the same spot. From there, we started a slow exploration into antidepressants and I’ve never looked back.

Once these little pills began to set all the neurotransmitters in my brain straight, my health began to improve exponentially. I also began to sleep at night, a plight I’d long ago accepted as insurmountable. Other little things began to shift, things like my lifelong, crippling, and fairly ridiculous anxiety over anything and everything.

As my perspective began to clear and buoy, I realized that anxiety and periodic bouts of depression had been with me most of my life, but it wasn’t until they almost stole every precious thing from me that I sincerely sought help, that I was truly honest about the desperate place I had landed.

With the introduction of antidepressants, I gained more than my health back. I gained my life. I also gained twenty pounds.

The jeans went back on the hanger (but let’s be honest, who wears boot cut jeans anymore anyway?), people stopped exclaiming there was no way I’d given birth to four babies, and I headed to the gym. Surely I just needed to get my substantial ass on the elliptical and the pounds would melt away again. Nope.

True, I felt better- stronger and more energetic- but the weight didn’t slip away like I thought it would. I tried counting calories, eliminating carbs, and skipping a meal or two every now and then. And still, I was much heavier than I wanted to be. Worse, I couldn’t stop thinking about it.

I don’t know how to step off this crazy train without jumping from one extreme to the other.

But I do know one thing I absolutely cannot, will not quit my meds.

I’m not thrilled with the weight gain they brought to my life, but I’m also not willing to walk through life skinny and hopeless, a shadow of myself.

Most days, it’s fine. My brain is healthy enough to keep it in perspective, to remember the give and take of life, to weigh the pros and cons and land firmly on the side of living a happy and heavy life.

And for the days that are a little harder? Say, I don’t know, Thanksgiving dinner with my single­-digit-sized family members? For those days, I’ve decided that I don’t have a choice. I have to hang in there, just get through it as best I can.

A better day is coming, I tell myself. And it always does.

All The Kids Are In School: What I Plan "To Do" With Myself
Sarah Torna Roberts