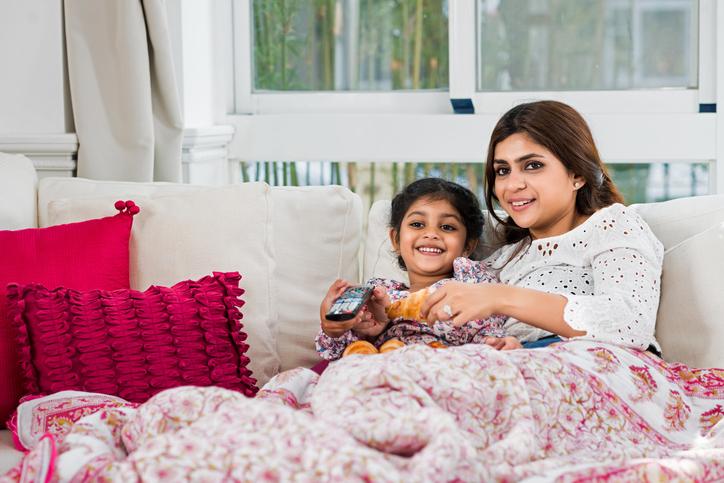 If kids get rewarded for chores, moms should get theirs too. (Image Credit: Think Stock)

It was an ordinary Saturday morning. My living room was a mess, toys strewn everywhere, Cheerios littered over the floor, and some mysterious green gooey liquid on the couch. My five-year-old daughter asked to watch a Minecraft video on TV, completely ignoring the fact that the TV was obstructed by the amount of things in our “living space.”

I could feel the resentment building.

“You can watch your video if you pick up ten pieces of garbage.”

At this announcement, her face contorted into a Gremlin after midnight, and the noises emanating from her mouth sounded like ">this well-known supernatural villain from the '80s.

I sighed a deep sigh, at which point my eight-year-old son jumped on top of my back, scaring the shit out of me.

“Who said anything about watching videos? Look at the living room! The only way anybody is watching anything is if they pick up ten pieces of garbage.”

His eyes rolled so far back; he looked like a diabolical zombie from Minecraft. (Maybe he was trying to tell me something. Let us watch Minecraft or we will transform into the characters and eat your brain...?)

I should just let them…no! No, I don’t need to do that. They need to listen to me.

I had done my chore and it was time to reap the benefits of my hard work. Just like my children had received the gift of Minecraft for their trash-collecting efforts, I gave myself a proverbial pat on the back by turning on my favorite show of all time.

I honed my scary mom face and demanded that they both pick up ten pieces of trash before interface time with the TV in any capacity, even (in my daughter’s case) if it meant licking said trash spontaneously. (Don’t ask).

My daughter threw herself on the floor like a 1960’s anti-war protestor. But she did eventually relent, recognizing that she’d better search for rubbish. She picked up two items and tried to play me, saying that she’d found ten things. Lies. I called her bluff and made her find eight more garbage items. My son, ready to get this ordeal over with, collected ten of the most random articles of trash he could find.

Fine. It was barely a chore, but I granted them their wish of watching their Minecraft videos.

Immediately after I switched the TV on, the pixelated blocks appeared, transfixing my children with mysterious wonder. That's when I had an epiphany. Here I was rewarding these shorties for their hard work as trash collectors. Where’s my fucking reward? I'm a hard-working single mother. I do a lot for these people, and do I get anything in return? No, no I do not.

I decided it was time to change that shit immediately.

Time to implement my own reward system.

I despise cleaning. DESPISE. Whenever I have to clean any part of my house, I’m angry the entire time I’m doing it. But the house needs to get clean, and someone has to do it. I am that someone.

The sink was full of dishes and I had to do load the dishwasher and clean the kitchen counter. I looked at those dishes like they were my mortal enemy. They glared back at me like an evil nemesis. I wasn’t going to let them get away with treating me like that. Yet still, I didn’t have any desire to go near the sink. I was angry that I had to clean up.

Then I told myself something extremely exciting that changed my entire frame of mind: Sarah Fader, if you load the dishwasher and clean the kitchen counter, YOU WIN! You get to watch an episode of Buffy The Vampire Slayer on Netflix. You can watch your favorite one, the one where Angel turns evil after sleeping with Buffy.

A smile developed as I looked at the dirty dishes with a new set of eyes. Once they were clean, I could do something fun! It was a challenge; I was ready. I rolled up my sleeves, put on my best Oscar the Grouch face, and stared at the dishes with a newfound sense of confidence. I picked up a bowl covered in hard oatmeal and began to scrub with every ounce of determination I had.

One by one, those nefarious dishes were less and less of a threat to my joy. I loaded them into their home (the dishwasher) and closed the door. As it clicked shut. I waved goodbye to them. I was ready to claim my reward. Buffy time!

I had done my chore and it was time to reap the benefits of my hard work. Just like my children had been given the gift of Minecraft for their trash-collecting efforts, I was giving myself a proverbial pat on the back by turning on my favorite show of all time.

I sat back on the couch, watching Angel turn evil as he achieved orgasm, and I was reminded of the dishes and their evil glare.

We deserve a reward for all the shit we have to do every day. Why don't we ever reward ourselves? You can't answer that, because there is no good reason. Think about what you love to do, and use it as a personal reward for doing all the shit you resent. In my case, dishes. Ew.

If you like this article, please share it! Your clicks keep us alive!
Tags
reward system
cleaning
Kids
chores