3 Reasons I Won't Apologize For My Black-Girl Hair 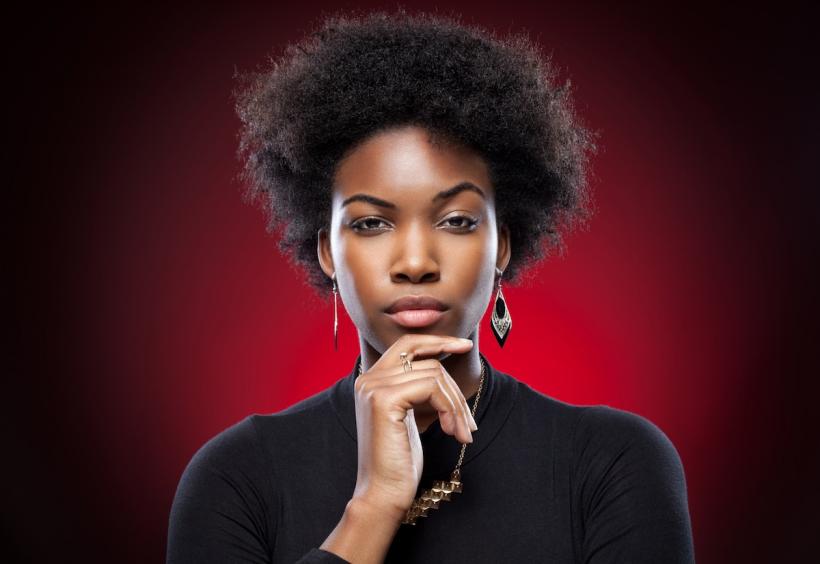 Black people’s hair is too tense for White America to EVER be comfortable. Image: Thinkstock.

Black African hair is not only “bad” hair: It is also radical as fuck.

When my friend Ivy sent me the link to Your Fat Friend’s thinkpiece about making forced apologies for her body, we immediately recognized an unsettling parallel between body shaming and Black-girl-hair shaming:

“I know I’m fat, but I’m spending every waking moment to change that. I hope you won’t write me off completely.”

Ivy can tell you from her vast experience thinking about body relationships that no one is safe from the gaze of body policing. All bodies are subject to public opinion; all bodies are judged by skewed standards of beauty and health.

But Black bodies get special attention.

Having a fat body is bad.

Having a skinny body is wrong.

Having scars makes your body ugly.

Having too much body hair is unattractive.

Having a body with black skin is dangerous.

And having a body with black skin and kinky, nappy, tight-coiled hair is unprofessional, unmanageable, and unfuckingforgivable.

The ostracization of Black women’s features is nothing new, and for Black women with kinky, West African hair, our forced apology would sound something like this:

“I know I’m Black, and that my hair is one of the places where my Blackness is most evident. But I’m spending plenty of time and money to cater to the racist standards around that. I hope you won’t write me off completely.”

To be clear, I am not offering an actual apology here, nor do I accept this racist standard as part of some honorable struggle to own all aspects of my identity.

As a Black woman, and as a mother of two Black girls, what I am offering is perspective on and staunch opposition to the lack of autonomy around our bodies in general and my Black-girl hair in particular.

“If your hair don’t sway, then it ain’t okay.” That’s the rule, and Black girls in America (whether natives or immigrants like me) have known it for generations.

Embedded conspicuously in the kinks and curls of Black hair is a deep history of race, politics, power, and pride.

Nigga naps and edges are no match for the miracles of Jamaican Black Castor oil and the matriarch of all straightened African hair, the relaxer.

Because, as long-standing history tells it, Black people’s hair is too tense for White America to ever be comfortable.

Here are three ways Black hair is punished — three reasons I refuse to apologize for mine:

1. Your company’s right to institute a dress/appearance code continues to take precedence over the way my hair naturally grows out of my head.

A retail store manager wrote to journalist Jenée Desmond-Harris to get help navigating this problem. The manager’s (White) supervisor repeated commented about her (Black) employees’ hair needing to be “neater and more professional.”

Desmond-Harris’ response spoke volumes: “It’s rooted in the idea that what works for white people is normal and ideal and should be approximated by everyone. Aka white supremacy. Aka racism.”

She spoke directly to what many Black women have experienced repeatedly; it is part of an old, hard truth: Straightened, long, nap-free, “neat” hair is a required component of a lease-to-purchase plan on the American Dream.

Under the pressure to achieve this dream, we often mistake judgment of and rules around our hair for practical, professional advice.

Case in point: Anna Gibson's critique of news anchor Angela Green's recommendation that Black women straighten their hair as a dangerous acquiescence to “workplace microaggressions around how we present ourselves.”

2. Hair is one of the litany of traits used to criminalize my children.

A report from the U.S. Department of Education’s Office for Civil Rights proved that an uneven use of suspension and expulsion is mirrored across K-12, affecting Black children three times more than White students.

The report analyzed outcomes, but it is vital to analyze the steps before the outcomes, meaning the policies and generally accepted daily practices as well. In doing so, we see the contributing factors — such as the reality that many school administrators are more likely to call the police when dealing with behavioral issues with Black children than with White children.

In response to this rampant punishment and criminalization, Kimberleè Williams Crenshaw organized a formal study around the effects of disproportional discipline on school-aged Black girls.

“Black Girls Matter: Pushed Out, Overpoliced, and Underprotected” developed out of “a critical dialogue about the various ways that women and girls of color are channeled onto pathways that lead to underachievement and criminalization.”

And these punishments aren’t always based on “behavioral issues,” either. In some instances, it is simply a Black girl’s natural existence that poses a threat.

And so the threatened ones threaten our children, the way they threatened 12 year-old Vanessa VanDyke when they told her mother to either straighten or cut her daughter’s hair or risk expulsion, because her hair violated school dress codes by being a “distraction.”

3. My hair is politicized and deemed an act of punishable resistance

Embedded conspicuously in the kinks and curls of Black hair is a deep history of race, politics, power, and pride. America's acceptance of Black hair is conditional at best: It's only okay if it behaves itself, if it is “good hair.”

“Good” Black hair is however a Black woman feels happy wearing her hair.

The United States Army itself cited its disdain for hairstyles like twists, dreadlocks, and cornrows, discouraging some and banning others outright.

From corporate culture, to school systems, to armed forces, to our own mirrors, comes the message that Black African hair is not only “bad” hair: It is also radical as fuck.

The simple assertion that our chemical-free hair is not just okay, but beautiful, is seen in America as a refusal to lie down.

Just ask Akua Agyemfra, who was sent home from work because her Black-girl hair refused to “hang down” the way company preferred their employees’ hair to hang. And trust, Akua’s experience is not rare.

Yet, it isn’t just about stand-up hair — it’s about the right to have and celebrate hair that White people don’t understand.

That’s why I loved the diversity of Black hair in Beyoncé’s delicious second visual album, Lemonade.

During the scene accented by Malcolm X’s recorded speech about the unprotected nature of Black womanhood in America, Yoncè’s team had the good sense to go beyond the expected 60’s era Black-Power afro. Instead, they made the deliberate decision to showcase a coif ardorned with the sharp, neat curls of a 3/8-inch curling iron and the versatility of Black-girl hair. Patience.

This is important because it proclaims that “good” Black hair is however a Black woman feels happy wearing her hair.

Be it golden cornrows, ass-length weave, or free-form locks, all hair is good hair. Black hair, like Black identity, is diverse and nuanced, but it still stands out as different from White hair.

The point is not that all Black hair needs to look the same, but that we share the experience of feeling pressure to alter our appearance, to present a version of ourselves solely to satisfy the White gaze.

When we truly own our bodies —the fat, skinny, scarred, hairy, melanated, unconventional bodies we walk around in — they will no longer be things to defend or hide or alter.

When it comes to Black-girl hair, it’s not about whether it’s relaxed, natural, blonde, black, weaved, or nah. It’s about bodily autonomy.

It’s about the right to choose — and to not to be punished for exercising that right.