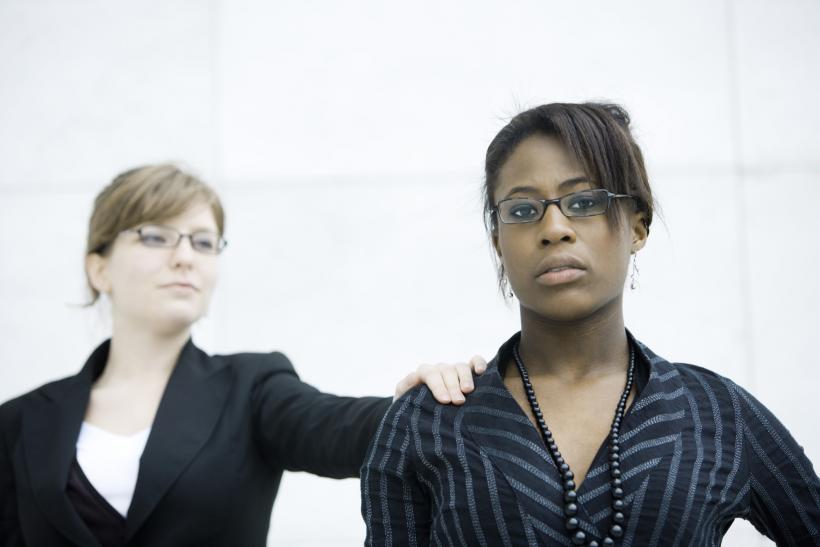 Over and over and over again white women ask me for things…. But it never seems to occur to them that I might not be interested in doing their work for them.

I get the desire to avoid confrontation over racism. It sucks.

I spent my undergrad years as the president of the feminist organization, so I have a lot of experience spending time with feminists. The people I worked with were passionate, thoughtful, and often downright hilarious. And a lot of these people became my very good friends and people I admired.

Still, as my school was majority white, a lot of these feminists were white. And, sometimes, they were White Feminists.

White Feminists are feminists who lack attention to the way that racial identity shapes lived experience. Often these are feminists who are fighting for “women” — as if all women are the same — and this tends to mean that they focus primarily on the issues faced by white women.

As a woman of color, this was something that became difficult for me to navigate.

This refusal to try to see things with an intersectional lens can make it nothing short of impossible for women of color to be a part of feminist dialogues. It’s hard to have to keep asking “But what about…?” and “Have you considered...?” in a group that’s already decided what it means to be a woman.

So I ended up being hurt regularly by missteps and slips in the feminist conversation.

1. By being unwilling to call fellow white people on their racism.

The most common thing I hear when talking about racism in feminist spaces is that they just don’t want to call out people that they care about — whether a significant other, family member, or good friend. They don’t want to risk losing a relationship they value just because that person does racist things.

But that last sentence is the issue, here: It's not that people are “just” doing “racist things.” What we really mean when we say this phrase is that this person is racist.

I get the desire to avoid confrontation over racism. It sucks. It’s never fun to risk a friendship or relationship.

2. By using self-care as an excuse not to call out racism.

Hear me out, because I know this sounds dicey. But when talking with these White Feminists about the importance of calling racism out when they see it, someone (generally a white someone) would inevitably say that they first had to do some self-care before they'd have the “energy” to confront people about their racism.

Yes, you have to spend a lot of time taking care of yourself if you engage in feminist activism. But I’ve always been under the impression that self-care is for the people marginalized by the situation — not by those with privilege. Would we tell a man to be sure to engage in self-care before calling out sexism?

There’s nothing wrong with taking yourself into account before calling out –isms. But if your excuse for not speaking up for marginalized groups is always your own exhaustion (and you don't have any health issues), you’ve got more thinking to do about how committed you are.

3. By saying “women” when they really mean “white women.”

Another common issue I have as a woman of color in feminist spaces is when white women talk about their experiences as if their issues are the only ones that exist. One white woman in the room would share an experience, and then another, and another until they were all piggybacking off each other.

There’s nothing wrong with feeling a sense of sameness. It’s often validating and empowering. But what these women failed to realize is that the women of color were generally silent during their conversations.

Where was our space for connection?

We have to recognize that in feminist spaces where there is a majority (or even close to a majority) of white participants, there are going to be issues of privilege when it comes to who talks and who remains silent. White women often feel silenced by men cutting them off and stealing their ideas. Women of color feel silenced too — by white women.

4. By exploiting the women of color for their emotional labor.

But it never seems to occur to them that I might not be interested in doing their work for them.

I’m not benefiting from this at all. Instead, I’m being turned into an educator.

And that’s fine, if we’re friends or have at least some sort of relationship. But for whatever reason because privilege, white women constantly email me and ask me for things. These white women never ask me to grab coffee and gossip, never send me a link to a funny video — they only care about my existence when I can provide them with a service.

Some of us are increasing the pain experienced by those around us every day, without even realizing the agony we’re causing.

As a community, we really need to think about how we can uplift marginalized voices within feminist spaces — instead of acting like we all share identical wounds.

If you like this article, please share it! Your clicks keep us alive!
Tags
feminism
women of color
white feminists
racism
activism
self-care
intersectionality