Dealing With My Cousin's Death Made Me A Better Person 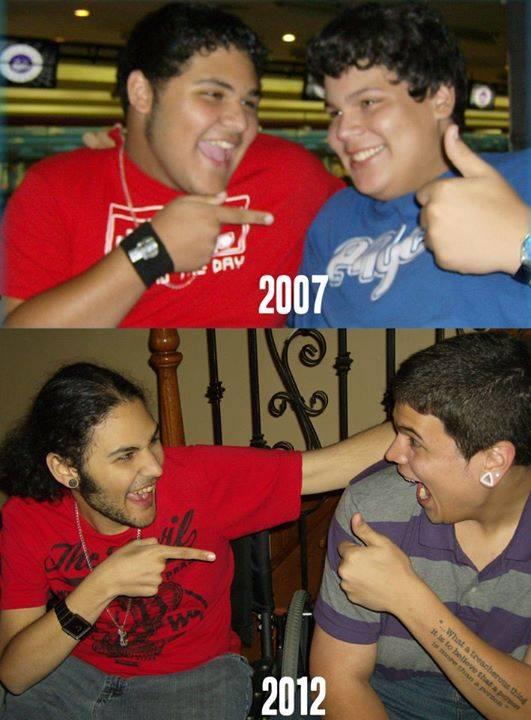 Mike was family and the oldest friend I’ve ever had. Image: Matt Joseph Diaz.

I’d never lost someone before, let alone my best friend.

Human beings are never set in stone. We can cling stubbornly onto outdated and dangerous ideals for the sake of nostalgia, but there is always the capability for change within us.

In that potential for change lies the real beauty in being human.

I used to be a hateful person.

In my younger years (I say that as though I’m not only 23 years old), I had extreme social anxiety; this plus the bullying, hostility, and ostracism I received for being overweight led me to become extremely distrustful of people.

In addition to that, I was living with mental illness I wasn’t even aware I had and was extremely insecure in my masculinity, which led to low self-esteem and internalized aggression that I directed outwards.

Hating people was my thing — literally.

I had a YouTube channel with thousands of subscribers and over a million views where all I did was make fun of different topics: celebrities, news stories, types of people that bothered me. I spent a lot of my time angrily ranting and breaking down anything that rubbed me the wrong way.

In my teenage years, my life motto was Hate everyone until they prove I shouldn’t. (Man, teenagers can be dicks.)

However, for every yin there is a yang — an equal and opposite force that balances them out.

For me, that opposite force was my cousin Mike.

Michael Medina was among the gentlest and friendliest souls I’ve ever known. His optimism and compassion were rivaled only by the positive vibes he brought to those around him.

Mike was family and the oldest friend I’ve ever had. He’s the reason I met the first girl I ever loved. He introduced me to the people who are still some of my closest friends to this day.

He talked me down from the edge when I was at my worst and didn’t want to be here anymore.

Mike had Muscular Dystrophy. He was diagnosed when we were 9 years old; eventually, the disease progressed enough for him to need a wheelchair. On February 13th, 2012, complications related to his illness made his heart give out in a hospital room in Staten Island, New York.

We were 19 years old when he died.

The morning of his passing, I had to be the one to call each of our best friends individually and tell them Mike was gone. The cries of disbelief and desperation that came from the phone that day created discord within me that would grow into anger and frustration during the next few days.

I remember sitting in the back of a friend’s car as we went to meet with my family. As the radio blared and I stared out the window, I felt uneasiness bubble up inside of me. It felt like whatever Drake song was blasting through the speakers had no courtesy for what had just happened, like the cars driving back and forth to their destinations didn’t care that he was gone.

It felt like the world was continuing to move forward as though it hadn’t noticed he wasn’t here anymore. It made me so angry.

This changed on the day of his wake.

I’d never lost someone before, let alone my best friend. This was a new kind of hurt I couldn’t have been ready for.

But what I really wasn’t prepared for was the last lesson with which Mike would leave me.

I wanted the positivity he inspired to continue to build and branch out and reach more and more people.

Before I knew it, I was sitting in a room filled shoulder-to-shoulder with people, young and old. I heard the funeral director say something about “needing to get permission to use the neighboring parking lot” to my aunt, and that was when I finally stood up. I was amidst a sea of people who were lined up out the door, filling the halls of the funeral home and spilling out onto the street by the dozen.

Hundreds of people, stood in clusters large and small, like they were mourning the death of Haley Joel Osment in Pay It Forward, consoling one another and sharing their favorite stories about the light that Mike brought into their lives.

As I walked amongst them and listened to them talk about what a positive force my cousin was in their worlds, I thought about what he’d been through and what he fought against every single day.

Over the years I’d watched as he slowly lost the use of his legs, dealt with chronic pain, and — by the end — struggled to eat food and keep it down. Never did he take out his anger and frustration on others or treat the world as though he’d been dealt a shitty hand of cards.

As I looked at each and every one of these faces, I thought of how he’d instead directed these feelings outwards and used them to enact positive change, how he supported and helped so many when he had more of a right than anyone to be selfish and miserable.

And with that, I felt my anger melt away.

It was that simple.

I thought of what a positive influence he was in my life, and how he’d seemed to have touched these hundreds of strangers’ lives in a similar way. I thought of the world without him, how he’d left it a better place than it was before he was a part of it; and in that moment, the aggression within me just wasn’t worth it anymore.

I didn’t want to dedicate my time and energy to hating things, I wanted to build things up instead of break them down. I wanted the positivity he inspired to continue to build and branch out and reach more and more people.

These days, I’m gentler with people than I’ve ever been. I’ve learned of the beauty and strength in each and every person, regardless of where they come from or what they’ve been through — and with every interaction, I understand more why Mike saw the best in people.

This is always a difficult and emotionally complicated time, and rarely do I know the best thing to say during moments like this, but here goes:

Tell those in your life that you love them.

Say it sincerely and say it often.

Don’t waste time masking your feelings because you’re afraid of rejection; a life full of vague maybes is no way to live.

Allow yourself the full spectrum of human emotion, one filled with legendary highs and devastating lows: for in each of them is a lesson about the nature of existence that shouldn’t be overlooked or passed up.

I miss my best friend, and I hope he believes in me.

But for now, I’m going to believe in everyone else.