Polls Update: Bernie Beats Hillary, But Who Will Beat Trump? 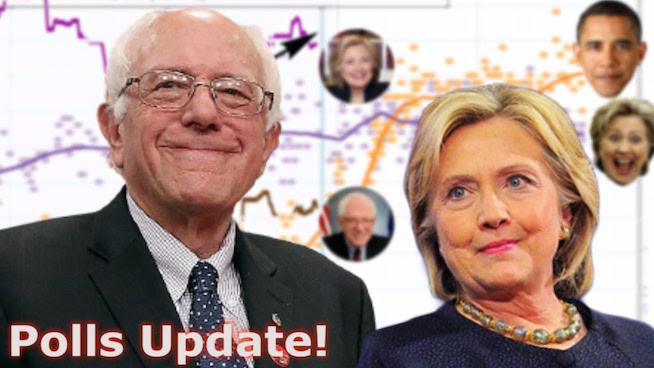 Yesterday, two of the final four Republican contestants (both of whom have lost to the now-presumptive nominee, Donald Trump) made post-campaign media appearances. Rubio gave an interview to Jake Tapper on CNN, and Ted Cruz — ever the media hog — scheduled his own press conference for exactly the same time.

Rubio said that while he maintains his reservations with Trump, and doesn’t want to be a part of Donald’s campaign, he “will support” the nominee. And Cruz, too, has not ruled out eventual Trump endorsement.

Surely Republican senators could get their hands on the tax returns Trump just said he will NOT be releasing, although it looks like this final line of Republican defense is… unlikely.

The burden of stopping this man-baby bulldozer-of-all-civility-and-intelligence from gaining access to the White House falls to the Democrats. It should be a cakewalk, but if there’s anything Trump has taught us, it is that the disgust and rage of a massive section of America’s population is weirdly powerful, and oddly contagious.

Democrats need to nominate the person with the best chance of cleaning the floor with Donald Trump. Not just for their own victory, but for the… dare I say, survival of the country itself.

That person, if polls and recent votes are to be believed, is Bernie Sanders.

He won in West Virginia yesterday, after winning big in Indiana last week.

And if anything should give massive pause to Democrats, it’s polling released yesterday from swing states that shows Trump and Clinton basically in a tie in the crucial states of Ohio, Florida, and Pennsylvania.

However, Sanders beats Trump in all three, by pretty big margins.

Initially, I would have said to go ahead with Clinton, as she is battle-tested and epically prepared in terms of resume experience.

But I’ve watched almost all of the Democratic debates, and Clinton is not going to hold up well next to Trump. She wants to make the kinds of arguments Ted Cruz made against him — arguments on policy, substance, and preparedness for the job.

These are losing battles against Trump, the master insulter and genius wise-cracker.

Instead, Sanders has the better temperament and approach. He’s also quick-witted, funny, and, most of all, likable. Even people who think Sanders is a lunatic on policy wouldn’t mind having dinner with the guy.

Overall, Sanders has a better chance of winning against Trump, and he needs to be the Democratic nominee.

If you like this article, please share it! Your clicks keep us alive!
Tags
election 2016
Trump
bernie sanders
Hillary Clinton