The Right To Be Ugly: How Lookism Affects My Ability To Be Carefree 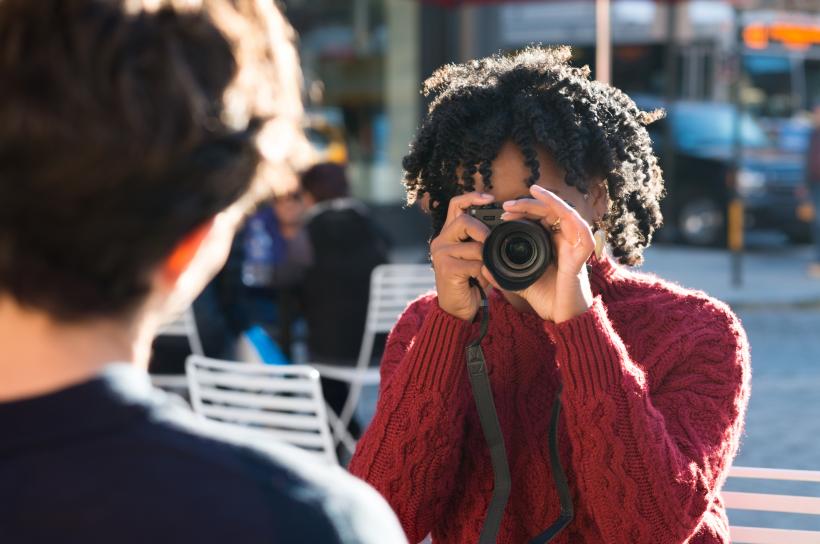 "I spent quite a few of my preteen and early teen years enjoying taking pictures. But because of the combination of racism, fat antagonism, and lookism, I wasn’t always comfortable getting in front of the camera." Image: Thinkstock

I was riding in the car with my younger cousin, who was driving. We were on our way to Queens for a family get-together to celebrate my aunt’s birthday. Between the unbearable heat and my disabilities, I’ve been finding it difficult to leave the house lately. So I was glad to be getting out.

I decided to take a selfie, but I didn’t feel like smiling.

So I sat there, in silence, seriously debating taking the picture that I wanted to take.

I am a fat, brown-skinned Black woman with what would generally be described as an “African” facial phenotype (large lips and a large, wide nose). I also have gaps in my front teeth, an inherited trait.

I’ve lived my entire life in a society that says I’m undesirable — “unpretty,” as TLC put it — because of my size, my skin color, and the characteristics of my face. I’ve spent only the last few years trying to undo the damage done to me by over two decades of fat antagonism, racism, colorism, and lookism.

While I’ve done a damn good job of that, I don’t think the residue of that soul destruction will ever be able to be fully scrubbed away.

Lookism is little talked-about. It’s a form of oppression that is essentially connected to a number of other marginalizations (ableism, racism/colorism, classism, fat antagonism).

Naturally, lookism intersects with these other oppressions a lot, but it is definitely distinct.

Sociologist and writer Heather Laine Talley defines lookism as “the interpersonal bias and structural disadvantages that accrue to those who are often labeled unattractive, ugly, different, or disfigured.”

Acne, teeth that aren’t “perfect,” shorter height, stretch marks (which, while often associated with larger people, can be found on bodies of all sizes), facial disfigurement (due to trauma or disability), and other physical markers of difference are all ridiculed in a lookist society.

And, as Talley notes, like all forms of oppression, it has real, tangible implications for our social, dating, academic, and professional lives.

It even affects how we interact with and move through the law enforcement and judicial systems.

And, of course, this all has profound effects on our mental health and self-esteem.

[W]hy must the acknowledgment of my beauty be predicated on how well and how often I contort to attempt to fit into some kind of ideal? Why can’t I be all the iterations of me and still be beautiful?

I spent quite a few of my preteen and early teen years enjoying taking pictures.

But because of the combination of racism, fat antagonism, and lookism, I wasn’t always comfortable getting in front of the camera.

If I did, I never showed my teeth. Even when not taking pictures, unless something was so funny that I was caught off guard, I always covered my mouth when laughing.

My smile — my whole look — was an embarrassment and I needed to cover up as much of it as I could.

And because I was ugly (in my mind at the time and by society’s standards), I had to put in every effort not to make it worse. That meant that discovering makeup in high school was miraculous.

It meant no “silly” faces when everyone went for the comical poses in photos. It meant being very aware of how I looked.

Spontaneity was a luxury I could not afford.

I don't have the same social and cultural freedom to make silly/ugly faces (or even relatively emotionless faces) as people with conventionally attractive looks and body sizes. People with more looks privilege have the freedom to be carefree in this way, while still being seen as beautiful, handsome, and desirable.

Meanwhile, I have to navigate when and where it's safe for me to be myself and engage in playfulness — and when I must conform my looks to society's standards (as best as I can) to avoid ridicule, violence, and blows to my self-esteem.

Bolstered by my new emotional growth over the last few years, I said, “Fuck it!” and decided to take that photo.

Because I don’t have to smile to exist in this world.

Unsurprisingly, it received 12 likes on Instagram and only eight on Facebook. It was disappointing, I won’t lie. Why I do have to do all of this scraping and fighting to remind myself that I'm beautiful, valuable, and desirable? Why can't I get the same validation of what I already know to be the truth?

And why must the acknowledgment of my beauty be predicated on how well and how often I contort to attempt to fit into some kind of ideal? Why can’t I be all the iterations of me and still be beautiful?

Of course, I don’t need likes, but you know what? Likes and positive comments feel damn good. And I’ll be blunt: I believe that most people who deny that they matter are either lying or have a TON of privilege (or maybe both).

Likes are just another form of compliment and, while not everyone takes compliments well (for a variety of reasons), they’re generally perceived by most people as a positive, flattering thing.

The decision to take that photo — no makeup, no smile, short, afro-textured hair — was just one victorious battle in what feels like an epic war.

I try to take it day by day, but it can be difficult. I still rarely take “silly” photos. It’s an experience that I wish I could partake in more often.

But even after all this growth and self-love, my fear of the potential consequences is still just too great.