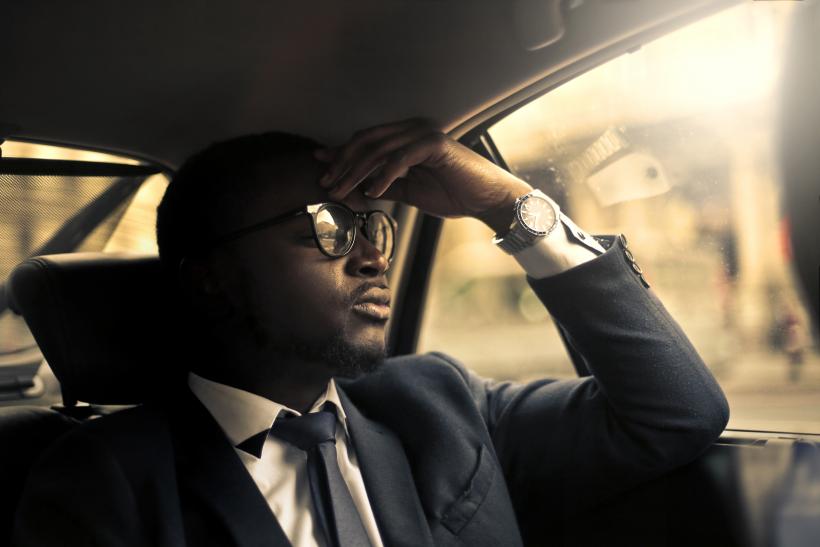 I was angry and felt defeated. I also knew deep in my heart that this would have never happened if I were white. Image: Thinkstock.

This article originally appeared on The Good Men Project.

As a Black man, I am used to poor treatment and being denied service.

I have been ignored by retail store clerks, stalked by department store security guards, made to wait an unusually long time for my order to be taken at a restaurant, and have a sometimes incredibly hard time hailing a cab.

Ah yes, catching a taxi — one of the many challenges of being Black.

My friends used to trade stories of what strategies worked when getting a cab driver to pick us up. Some would say, “Well, if I am with a white person, I will step back and let them catch the cab, then I will get in.” Another friend said that he would have a better chance hailing a taxi if he was by himself.

With the advent of rideshare services such as Uber and Lyft, I didn’t have to worry about cab after cab passing me up as I wave my hand for 15 minutes. I would just order a car through my phone and my ride would appear without any effort.

Chic co-founder Nile Rodgers recently praised Uber saying, “I use it because cabs wouldn’t take my money as a Black man.” I thought I was set; then of course reality set in.

While visiting Los Angeles last weekend, my friend Bernadette and I along with two other guys decided to bar hop around Santa Monica. We had a pretty good time—weaving in and out of the different scenes, listening to the latest music, and enjoying our night in SoCal.

After last call, we left the bar Circle and decided to call it a night. Opening both Uber and Lyft apps on my Iphone, I decided upon Uber because they didn’t have a price surge. When Jay the Uber driver pulled up, he called me over.

As I walked to his car, I noticed Jay had a look of trepidation.

He stared at me for a few seconds more, looking me up and down and asked, “Are you going to Vegas?”

I thought that was a strange question, but I just brushed it off. It’s late. “No,” I said. “I put the address into the destination when I called for the car.”

I then waved Bernadette and our two other friends over to go home. When they approached the car, Jay stiffened up even more and told us, “I don’t think there is enough room for four people.” Mind you, Jay’s car is an older four door Toyota Avalon.

Jay looked at all four of us and asked, “Do you have any bags?”

Confused, I said, “No, we are coming from the bar, we didn’t bring any luggage with us.”

We then all got into the car and one of our young friends asked, “You sure you want to do this?”

“Yeah,” I said. My excuse was, “I’m tired, I want to get home.” I had an early flight back to San Francisco, so I needed as much sleep as I could get.

Anxiously and seemingly looking for any way to get out of driving us, Jay asked again, “Are you all going to Vegas, because I’m not driving to Vegas.”

I replied, “No, dude we are not going to Vegas. What is with the Vegas question? The address we are going to is in Beverly Hills.”

Jay then paused and said, “If you all want to find another driver, you can…”

All four of us immediately got out the car, pissed. I yelled, ‘This is bullshit. You knew where we were going, you just didn’t want to take us.”

He then began to drive off, but pulled over and got out of the car. Jay and I began to argue back and forth, calling each other every other nasty word until he said, “You better watch who you are talking to motherfucker, I will put you in handcuffs.”

I then stopped for a second. I, a Black man is arguing with a white and possible Asian or Latino male in a predominately white neighborhood.

The tension is rising and he begins to threaten me, saying he would “fuck me up” and “put me in hand-cuffs.” I then look down the street and there is a group of police officers standing over a young Black woman, cuffed to the ground.

I then look at Jay’s dress — combat boots, sweats usually worn by police or a solider, T-shirt tucked in, and overall bullying demeanor and thought to myself, This guy is some type of law enforcement. I then looked at his hands to see if there was any movement to grab a weapon from this lower back. I said to myself, This guy is trying to bait me into an altercation. This is how these things escalate.

I am under no illusion about the system of racism/white supremacy. It is not just unlawful arrests and the killing of unarmed Black men.

Bernadette suddenly got in between us arguing with Jay, saying that he was a racist, saying he never wanted to drive us, and plenty of profanities.

Jay approached her and said, “I will fuck you up.” Now this is disturbing. Bernadette is 5’1 and less than 100 pounds, while this guy is 6 foot and a muscular 200 pounds.

Not wanting the situation to get worse, we calmly pulled her away.

Jay walked back to his car and drove off.

I was angry and felt defeated. I also knew deep in my heart that this would have never happened if I were white.

I had been using Uber for over 2 1/2 years and never came across anything similar to this. That night, we were not drunk, stumbling, loud, or having a negative attitude. The four of us were in a great mood. We just had a pretty good time in Los Angeles and were ready to go in.

Did I use profanity at the driver when we were arguing? Yes, I was mad because it had seemed like we were scrutinized heavily for no reason. With that, my gut feeling is that this altercation would have not happened had we not been four Black, Latino, and Asian people.

I am under no illusion about the system of racism/white supremacy. It is not just unlawful arrests and the killing of unarmed Black men. It is the everyday discrimination and micro-aggressions we receive for not being white, and it does not matter if you attempt to hail down a cab or contact a car service through an app on your phone.

Racism is everywhere and we will come in contact with it in our everyday lives.

That night, I emailed Uber about my experience. They replied later that day saying how this driver does not represent them, they would contact Jay about this, and also refund the cost of the ride.

While that is considerate of them, that ain’t enough. I have heard of many Black people having similar instances of being racially discriminated and even threatened with assault while using the app.

It is time for Uber to own up to the problems people have been experiencing being passengers of their ride service.

Saturday evening was just another reminder of being Black in America. No matter if you use an app or try and flag a cab down, we cannot escape racism.