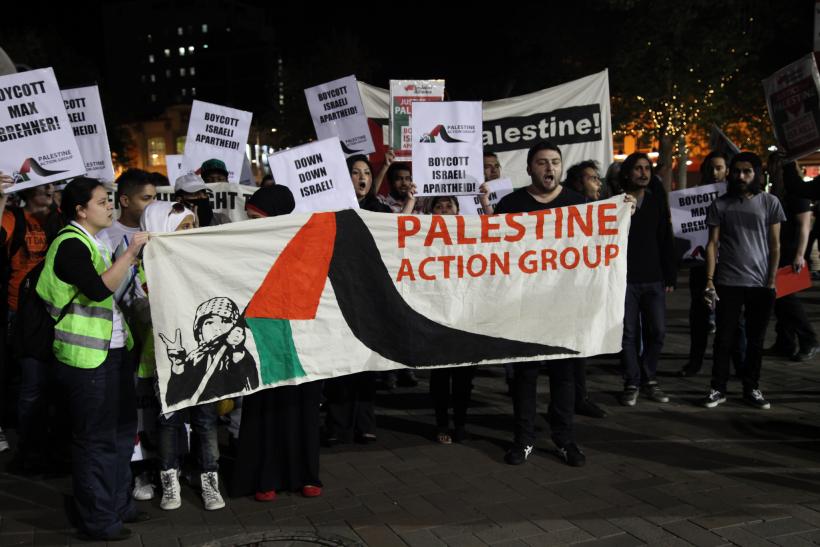 In the mainstream US media, there will be no coverage of the April statement by the UN Secretary General Ban Ki-moon to the UN Security Council on Israel. Image: Kate Ausburn/Flickr.

Two books go way beyond the US mainstream media's attempt to be “evenhanded.”

New York’s Governor Andrew Cuomo signed a decree attacking the non-violent Boycott-Divestment Sanctions (BDS) movement, which is one of the few avenues in the West to hold Israel to account against its occupation of the Palestinian lands and its illegal settlements.

But, in the United States at least, it is virtually impossible to find the mainstream media being “evenhanded” on the question of the occupation. A new film by Loretta Alper and Jeremy Earp — The Occupation of the American Mind — shows that Israeli-funded propaganda (hasbara) has effectively rendered the US media into marionettes of Israeli state policy. At the Democratic Party’s platform committee, Cornel West had to make the case that the occupation is a reality. Such a fact could not be taken for granted.

In the mainstream US media, there will be no coverage of the April statement by the UN Secretary General Ban Ki-moon to the UN Security Council on Israel. Ban pointed out that not only has Israel continued to build its illegal settlements, but it has also systematically demolished Palestinian homes. By early April, the Israelis had demolished as many Palestinian homes as they had demolished in all of 2015, which means that the pace of expansion has increased. Thousands of Palestinians have been displaced by these demolitions. The future Palestinian State recedes further into the distance, a fact that the US media declines to cover.

Reading Ben Ehrenreich’s The Way to the Spring: Life and Death in Palestine(2016) is an antidote to the appalling American coverage of the Israeli occupation of Palestine. Ehrenreich, an American novelist and journalist, lived off and on in Palestine for the past three years. His is a very kind voice, eager to provide space for the Palestinians to tell their stories, interested in the complexities of their emotional and political landscape, unhurried in his prose. Two villages (Nabi Saleh and Umm al-Kheir) and two towns (Ramallah and Hebron) provide the scaffolding for the narrative. Ehrenreich befriends a variety of people, each of whom teaches him that their “normal” is the life of occupation. Violence is part of it, but so too is survival and frustration, making meaning of a life that is structured so pitilessly. As he puts it,

Grief was not something special. There were greater and lesser sorrows, but sorrow was a given. So was the pain of humiliation, the hard pride of refusal, a certain saving rage. They spilled over everything. What mattered was that these emotions were not suffered individually. They were shared, and in that sharing it was possible to laugh (p. 48).

These reflections come from Nabi Saleh, where a considerable part of the village has protested the theft of their water spring each Friday. There is ritual to the protest, but also danger. Lives have been lost, limbs have been broken, long jail sentences have been routine. Nariman Tamimi sits outside her home, puts coal on her arghile and tells Ehrenreich about one of her arrests (she would later be shot by live fire and now walks uncomfortably with a cane). “They beat me, and they arrested me,” she said. “That meant they wanted to silence me, which meant that what I was doing was important” (p. 64). Why would the everyday brutality be so precise if not for an effect — to break the spirit of the Palestinians?

Lives lived encaged by the Occupation produce — says UN Secretary General Ban — “fear, humiliation, frustration and mistrust. It has been fed by the wounds of decades of bloody conflict, which will take a long time to heal. Palestinian youth in particular are tired of broken promises and they see no light at the end of the tunnel.”

Ehrenreich sits with an Israeli activist Eran Efrati in Jerusalem. He had been a soldier in Hebron in 2006-7. Efranti described the outrageous things he was asked to do by his commanders, such as raiding houses in Abu Sneineh. His unit would wake up the residents, eject them from their home, take pictures of everyone and then destroy whatever they could in the home. Why were they doing this, asked a naive Efranti of his commander. “If we go into their houses all the time, if you arrest people all the time, if they feel terrified all the time, they will never attack us. They will only feel chased after” (p. 205). The point of the soldier’s march through the lives of the Palestinians was to make them realize where they stood — and why they should cease resistance and depart from their encaged lives. The occupation, as Ehrenreich describes it, is not merely spatial; it is neurological.

Reading Ehrenreich’s book beside the work of Nadera Shalhoub-Kevorkian, who teaches at Hebrew University of Jerusalem, is startling. Shaloub-Kevorkian studies the way in which the technologies of the occupation produce an everyday form of victimhood that stretches from the streets to the most intimate of spaces for Palestinians. In her book — Security Theology (2015) — an industry of fear can be glimpsed from the Tag Mehir’s “price-tag” violence against Palestinians to the difficulties that Palestinians face in giving birth and burying their dead. The depth of the violence and uncertainty, Shalhoub-Kevorkian writes, moves Palestinian women to speak of “being choked, suffocated or gagged” (p. 164). There is social trauma here, the erasure of society, what Shalhoub-Kevorkian calls “sociocide” — the death of society.

The grammar of the Israeli occupation is to put pressure on Palestinians till an act of violence takes place — a knife attack, say — and then to use that event as an excuse to deepen the displacement with more settlements. Netanyahu’s new settlement announcement, which is essentially ethnic cleansing, is couched in the language of security. What are these knife attacks? Ehrenreich visits the family of Anas al-Atrash in Hebron. Returning from a week of work in Jericho on November 7, 2013, Anas and his brother Ismail had filled their car with vegetables and fruits for the family in Hebron. At a checkpoint, Anas opened the door to his car and got out. An Israeli soldier shot him dead. Three days later, the Israeli Defense Forces sent out a tweet: “Terrorist Anas Alatash attempted to kill #IDF soldiers.” The body of Anas al-Atrash would now provide the raison d’etre for the demolition of Palestinians homes and the expansion of illegal Israeli settlements.

Ehrenreich, with a fierce determination for the truth, gets the family’s version. Anas had no interest in politics, they tell him. That was their way. Keep your head down and work hard. He was studying accounting and hoped to get married soon. The Israeli soldiers and intelligence officials keep asking Ismail if his brother had a knife. There simply was no knife, as Ehrenreich found from eye-witnesses who said that Anas had been killed in cold-blood. “This is a savage country,” said one. “They have no shame” (p. 205). He meant the Israeli troops.

When I investigated the killing of Abdullah Hussein Ahmad Nasara at the Huwwara checkpoint on December 17, 2015, I found eyewitnesses who said he had his hands in the air when he was fatally shot. Nasser told me there was no knife. “I saw them kill a boy,” he told me. Kamal Badran Qabalan, an ambulance driver, could not retrieve the body. The Israelis wanted control over the body and the story they would tell about it.

Soldiers told those who witnessed the killing of Anas al-Alatash that they had seen “a guy attack a soldier with a knife”(p. 206). That was the story that had to make the wires. It was essential for the Israeli narrative to overshadow the truth. Ehrenreich writes to the Israeli army, asking for access to the security camera footage to verify the facts of the death. Mickey Rosenfeld, the Israeli police spokesperson said that under no circumstances would the footage be released. “There is no investigation under way,” he wrote to Ehrenreich later. There is no need for an investigation. Hasbara has its own story to tell. Ehrenreich’s doggedness is its inverse.

Anas did not have a knife in his hands. But others did. Why did they use knives and other futile instruments to attack a regime that is impervious to such ridiculous gestures? These are the kinds of actions that frustrate Issa Amro of Hebron’s Youth Against Settlements. The armed struggle is futile, says Amro. He watched in the early 2000s as his friends died one by one, one gunman falling before the vast Israeli regime. “I knew they didn’t have weapons. They didn’t have enough training. They weren’t dangerous people,” he tells Ehrenreich (p. 175). Yet, the neurological damage of the occupation sends people to places of great dismay. Lives lived encaged by the Occupation produce — says UN Secretary General Ban — “fear, humiliation, frustration and mistrust. It has been fed by the wounds of decades of bloody conflict, which will take a long time to heal. Palestinian youth in particular are tired of broken promises and they see no light at the end of the tunnel.” Secretary Ban blamed the “settlement enterprise” for the tension in the region.

Amro is buiding a movement of the people of Hebron to confront the settlement enterprise and the occupation with their bodies and spirit. The residents of Nabi Saleh conduct their protests to draw a line under history, and — as Bassem Tamimi says — to draw international attention to their plight. It is here that the BDS movement comes in. It is an ally of those who want to restart the dynamic of Palestinian politics, broken by the Oslo Accords. Governor Cuomo and others might try to ban BDS by executive action, but the mood in the United States is changing. Last year, I edited a book called Letters from Palestine: Writers Respond to War and Occupation. Ehrenreich has an essay in the book from Gaza. He is joined in the book by Junot Diaz, Teju Cole, Naomi Shibab Nye and others. These writers have broken the consensus. So has Viet Thanh Nguyen, who won the 2016 Pulitzer Prize for his novel The Sympathizer. Nguyen has joined the BDS movement.