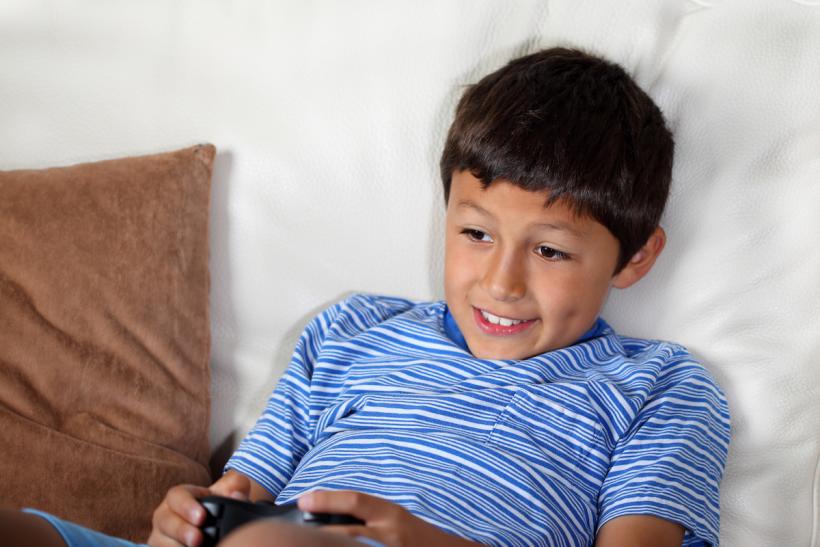 I would rather him spend his teenage years gaming with friends and going to geeky cons than drinking beer and trying to get laid.

When my oldest son was a baby, my husband and I used to talk about what sports he would play. We imagined going to Friday night football games in high school, little league baseball games, karate things (whatever karate things are called). We just assumed we’d be a sports family. I don’t think it ever even entered my mind that we wouldn’t be. Kids play sports. We have kids. Therefore, our kids will play sports.

My husband is a sports guy and, though I’m not as into them as he is, I’m not antisport. I see the benefit in team sports, but I’ve never been one of those cool chicks who like sports and know all the stats. I think we both assumed he’d play something. He’s a big kid, he’s agile, he likes to roughhouse and be physical. It always seemed like it would be a natural progression.

When he was three, I signed him up for peewee league soccer with our rec department. It was a horrible experience for him and, long story short, he didn’t want to play this year. We tried a couple other age-appropriate things; tumbling, swimming, things like that. Nothing really lit a spark for him.

Until he saw his first Spiderman cartoon. Then it was ON.

Video games seem to call to his soul.

He’d play all day long if I let him. And if I'm honest, sometimes I do. We live in the deep south and this summer, in particular, was brutally hot. It topped 100 degrees every day in July. Add the insane humidity, and the heat index was usually 110. AND, we live just far enough away from the coast for it to be swampy and marshy and full of mosquitoes and gnats. Those things combined make for horrible summers, so we stayed inside most every day. And he played PlayStation.

He’s really good, too. I know it’s a weird thing to be proud of, but I am. I’m proud of his problem solving and fine motor skills. I’m proud of the way he chooses to be “good guys” and plays female characters as often as male characters (“Black Widow is awesome, mama! She’s super tough!”). I’m proud of the way he has learned to navigate all the menu screens and find what he wants despite the fact that he can’t read yet. I think spending as much time gaming as he does has been beneficial, I really do.

My kid is a kind, sensitive, thoughtful, empathetic boy and, while I’m not saying sports would break that, there’s a good chance it would happen at least a little

And I’m a total geek, too, so I LOVE that he loves Star Wars. It makes me giddy that he knows who Boba Fett is and that Princess Leia is from Alderaan. I want him to enjoy those things as much as I do. I would rather him spend his childhood playing video games and playing with superheroes than being on travel teams and going to swim meets (props to all of you guys who do that, though! It’s just not our thing). I would rather him spend his teenage years gaming with friends and going to geeky cons than drinking beer and trying to get laid.

It’s just who he is. He’s not an athlete, and I’m glad we had realized this before we had any more confidence shattering sports experiences. We’ll keep offering him opportunities to play sports, but if he doesn’t want to, he doesn’t want to. I’m not going to pressure him into it. And if I'm honest, I’m kinda stoked about it. The whole toxic-masculinity-macho-boys-will-be-boys attitude that’s so prevalent in high school and college sports today is pretty sickening. And I don’t want to have to do double parenting duty to counteract that bullshit.

My kid is a kind, sensitive, thoughtful, empathetic boy and, while I’m not saying sports would break that, there’s a good chance it would happen at least a little. I don’t want to wake up one day and find my sweet boy turned into a 13-year old who is stifling emotions because boys don’t cry or a 17-year old who objectifies or bullies people because of what he was exposed to or taught in organized sports.

If he’s lucky enough to have found his “thing” at such an early age, then he’s a lot luckier than a lot of people.

Some of the smartest, kindest, funniest, best people I know are gamers and geeks, and if that’s where he’s headed, if that’s the kind of person he’s going to become, I’ll take it and count myself lucky.