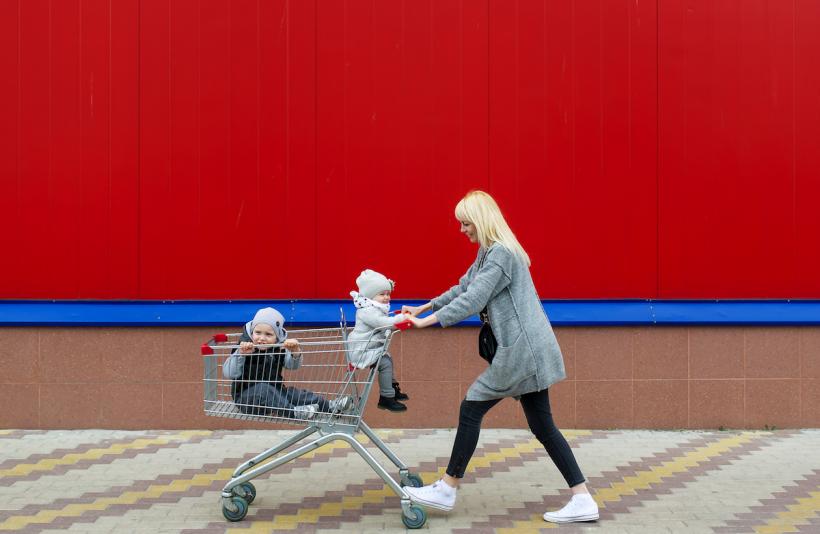 I’m a stay at home mom, and as such, people often have certain expectations of me — preconceived notions, if you will. For instance, it’s accepted that stay at home mothers drink copious amounts of both coffee and wine, wear “house pants” or yoga pants all the time, and are perennially tired and unshowered. Most people assume that if a mother stays home with her kids, she spends her day alternating between chores and despair with occasional bouts of Facebook and Instagram to connect with the outside world. And a touch of Twitter to get her angst out.

There’s a rule that all stay at home mothers must love Target. There are odes written to Target. I see people waxing rhapsodic about Target at least once a day as if they fall into a vortex of time and space once they walk through that automatic door into the Starbucks and popcorn odor of the entryway. Those concentric rings become an eye, seeing into the depths of their souls, hypnotizing them, telling them to buy purses and leggings and office supplies.

I have a confession to make.

Target, meh. I’m just not that into it.

I think it’s a useful store, sure, but I’m not beguiled by Target like my compatriots. I don’t walk in to get detergent, spend three hours browsing, and walk out with throw pillows, a new lamp, three eyeliner pencils, a contour kit, and some slippers. I don’t leisurely wander the aisles, touching, stroking, and smelling things as I pass. I’m in; I’m out. I’m done. If I force myself to wander, I see things I like, sure. But I’m not much of a shopper, so the bullseye doesn’t call to me as it does to other people, like Frodo and the Eye of Sauron. I’m immune to its charms; I’m Samwise Gamgee.

And while we’re on a roll, I’ve never been to Starbucks. *gasp* Yeah. Never.

It’s true. Many years ago, after Starbucks moved into my college town — and set up shop right next door to my favorite independently owned coffee house (Blue Sky Coffee, Athens GA. — their Dancing Goats blend was AMAZING), and subsequently put them out of business — I decided that I wouldn’t contribute my dollars to their monopoly. I’ve been okay with this decision for like 15 years and I don’t feel as though I’ve missed out on anything except bad music and grossly overpriced coffee in stupid sizes.

You know where I go for coffee? My kitchen.

It is less pretentious, less crowded, my mugs are all the same size (none of which are Venti), and the music is better.

It’s also a pretty common assumption that SAHMs are prone to indulging in wine. I’m not gonna lie, some stereotypes are true, and this is one of them. At least for me. My son and husband were at the grocery store a few days ago, and my 4-year-old grabbed a bottle of wine and handed it to my husband. “We should get this for mama! She loves this stuff!” I’m teetering between shame and pride that he’s so thoughtful.

Stay at home moms often get a bad rap. We’re supposed to be tired and disheveled, unwashed and unhappy. We’re supposed to drink too much wine, take Xanax, and catch puke in our bare hands. And while some of those are true sometimes, in my experience, not all of them are ever true simultaneously. And not all of us blow wads of cash at Target every other week or have a daily fix of our favorite Starbucks order. That’s the thing about stereotypes right? Sometimes they’re true, but a lot of times they’re offensive bullshit.

I think it boils down to this: you like Starbucks? Cool. Does target speak to you in seductive whispers? Right on. You keep more pinot in your pantry than ketchup? Good on you. You do you. I’ll do me. Let’s not judge.

If you like this article, please share it! Your clicks keep us alive!
Tags
mom
motherhood
parenting
wine
target
starbucks
stay at home mom