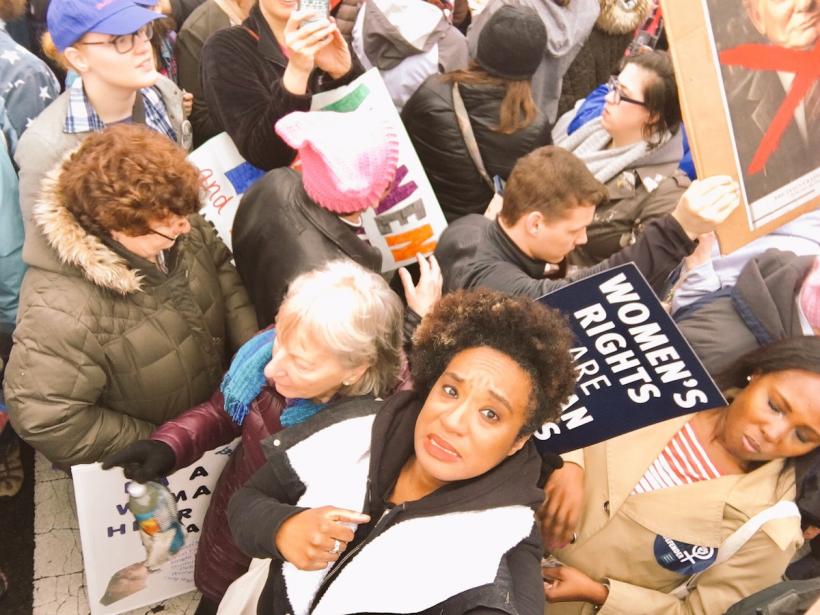 No one said protests would be fun! (Photo: Aja Barber)

You know how some things look so pretty from far away and then, up close, they’re just a big old mess? I believe Cher referred to this phenomenon as a “Monet” in Clueless. Never has a more accurate phrase been invented to describe my feelings about the Women’s March on January 21st. The film’s title is pretty apropos too.

At 7:20 Saturday morning, I, along with my sister and some of our close friends, drove to the Wiehle-Reston metro stop to board one of the incredibly packed trains with thousands of other women (and men) to march on Washington in the name of Women. The mood was positive and downright joyful, and I quickly found myself feeling charitable and swept away by the sea of pink pussy hats and general bonhomie. Volunteers at the metro were handing out water to marchers and snacks (string cheese and granola bars), and I felt something stir in me from just this small, sweet, endeavor — feeding each other, caring for each other.

On the train, there were songs sung, cheering, and seat switching (to give others a chance to sit). When we first boarded the train, my heart was immediately warmed by the scene between a father and son. The father (clearly taking his son to the march, to do their part) told the son (probably age eight or nine), “Bud, you and I should stand if you can do it.  Can you do it?”

And the son responding so proudly, “I can do it!”

Good manners don’t have to die to allow feminism to thrive.

As the day progressed and the crowds grew bigger, I was able to ground myself again and look at the movement playing out before me with a critical eye. Something about being caged in a small space (we were right outside the Hirshhorn) with other humans, really makes you question the actions of other humans.

The program as a whole was much too long and went more than an hour over schedule. We stood in the same spot for about three hours, willing the speakers to speak faster and complaining about our aching backs like 80-year-olds. No one said protests would be fun! 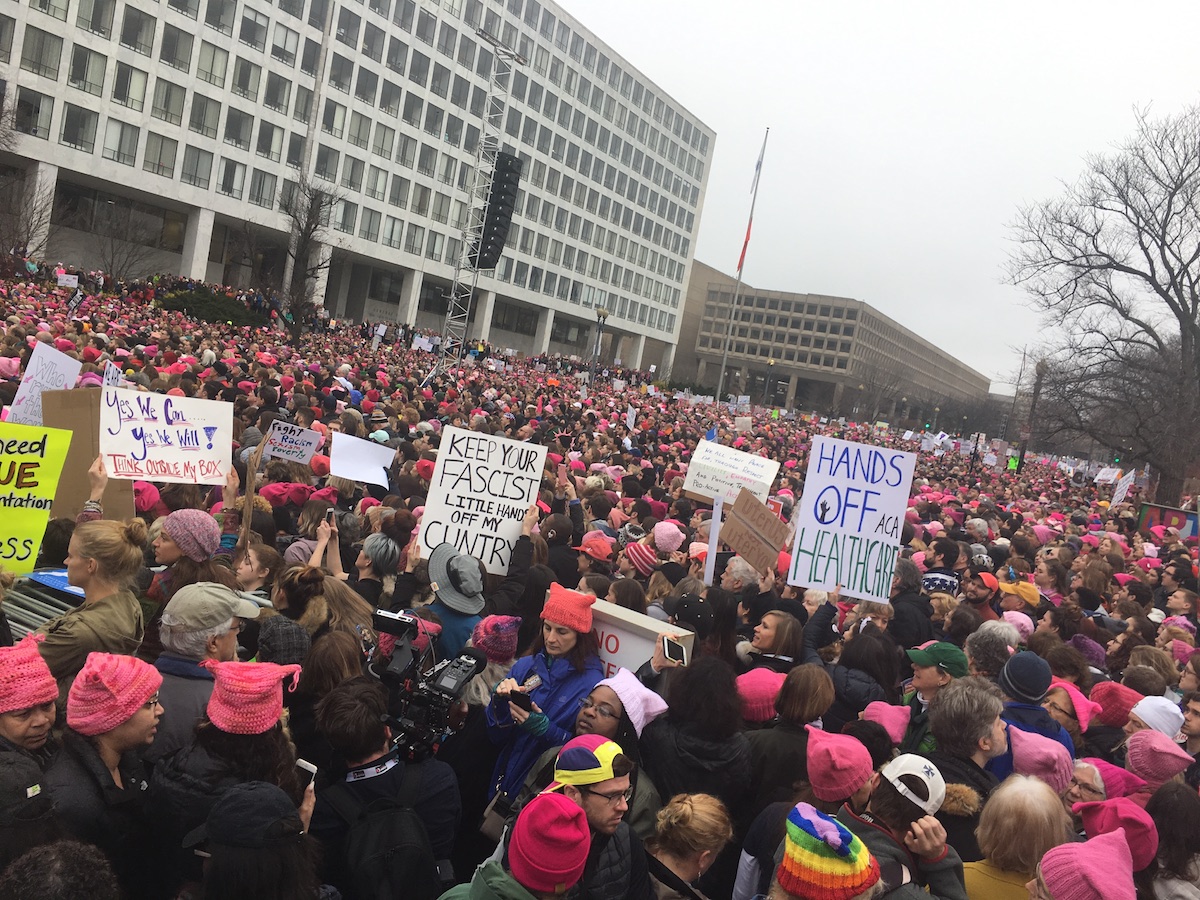 When the program first started and the microphones cut out on speakers (perhaps accidentally), my sister referenced the scene in Forrest Gump in which a counter-protester cuts the audio on Gump’s speech on the National Mall. By the time we were nearing the end, my sister had likened herself to the counter-protester in the film, just wanting to cut everyone’s audio so we could get moving and stretch our weary legs. When the program still didn’t wrap up, we amused ourselves by singing Let My People Go in faux dramatic baritones for anyone that would listen.

Are you truly a feminist? Is your feminism intersectional? Was today a display of ally theater or are you actually interested in making the world a better place for all of us? YES. ALL WOMEN.

Part of the reason the program went so long was that there were A LOT of speakers. I think this was the organizers' way of covering all intersectional bases. But you can’t be truly intersectional if you’re allowing people to speak who have done real harm to communities within the movement.

I don’t think I should have to say this in 2017, but hey, look who the President is. I don’t play feminism with actresses that do “yellow face” films and neither should you. I stopped supporting Scarlett Johansson the minute she signed on to do Ghost In The Shell. There are a bazillion roles for her and actresses that look like her, so I don’t take kindly to that sort of nonsense. Once again, if your feminism isn’t intersectional, what is your life even? If you do problematic things which hurt other women, excuse me if I start shouting “MARCH!  MARCH!” the minute you take the podium. Because at that point the program had gone over by almost an hour over, and my knees and back did not have time for a white feminism drum circle.

I was more than okay with her microphone getting cut, especially after she uttered the phrase “I respect that you are our President-elect and I want to be able to support you.” What would you like to support Scar Jo?  The part where he pledged to do mass deportations? Or when he suggested a registry for Muslims? This man ran a campaign on zero platforms for any intersectional feminist to support, so that line leaves me in a rage. I am not here for these neutral privileged problematic white feminists. I will repeat that as long as I need to until everyone gets the message. 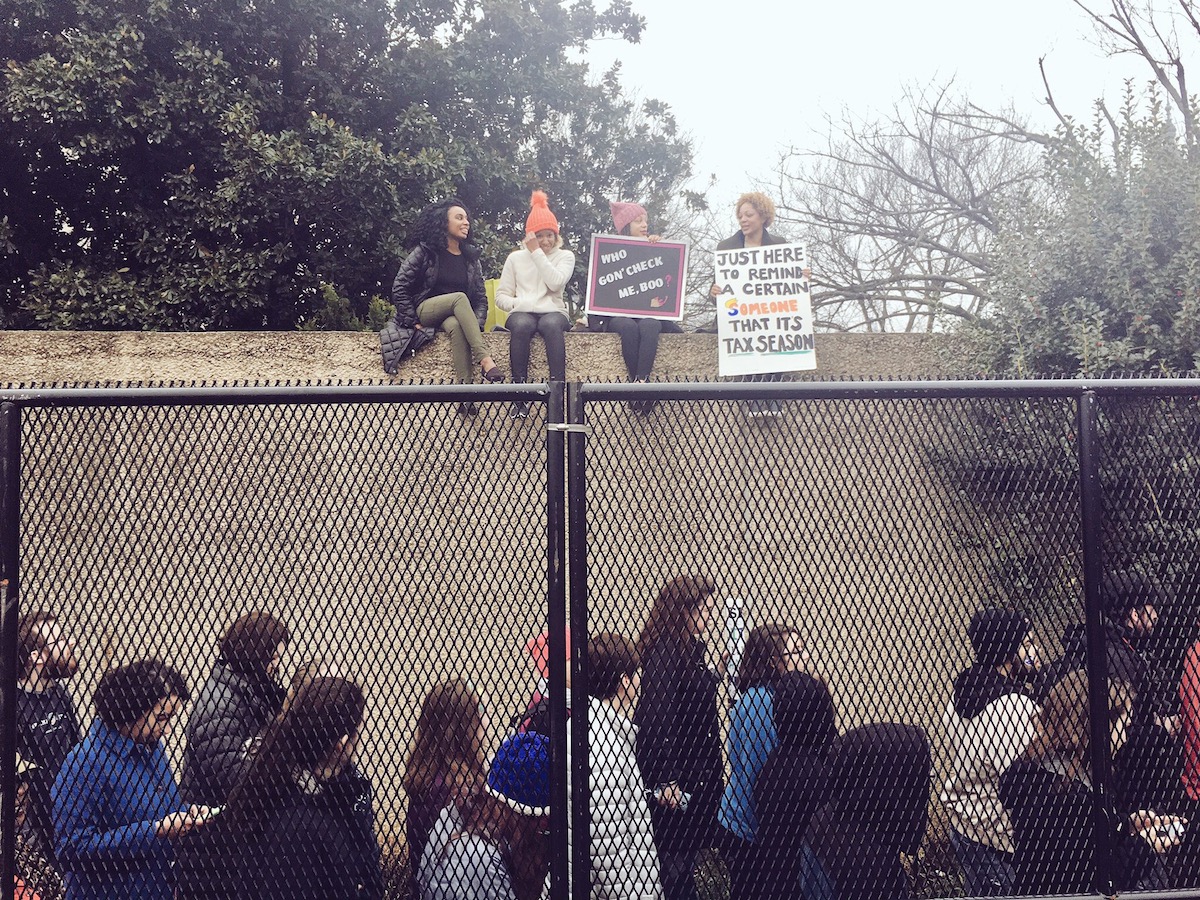 I sure was disappointed in the organizers for that bit of poor judgment on their part. I would get home later and realize that I didn’t even KNOW that both problematic Amy Schumer and problematic Madonna were there (because the crowds began to disperse and march before they took the stage; when you run hours over schedule, people will leave). Both of them are so problematic; I don’t know where to begin. But shout out to Madonna for giving the GOP a soundbite which they’ll use to be negative about the march. Someone had to do it I guess.

The most important thing I can’t seem to stress enough is that white women need to start showing up for people besides other white women.

It was great to see the numbers today but where the hell have you all been while the rest of us were fighting for our humanity on a regular basis? It doesn’t matter how much everyone wants to sing Kumbaya right now, the writing is on the wall, and white women played a huge part in electing Donald Trump (53% of those who voted, to be exact).

You can’t take it back now, and you can’t put a fuzzy knit pussy cap on it. If the number of white women who showed up for the march today, showed up to protest the next time an unarmed black person is needlessly shot, maybe we wouldn’t have a need for police reform.  Whether or not people realize it, systems of oppression all work hand in hand scratching the back of one another.

If you want to destroy the patriarchy, you must also work to destroy white supremacy. The two thrive very nicely together.

I won’t even entertain the song and dance that I didn’t notice the palpable silence from my fellow marchers anytime one of the speakers made a call to end “white supremacy.” We either rise together, or we fall together, and white women, I’m not ready to do that team building exercise where I fall into your arms — because I think a whole bunch of you would drop me on the floor.

When I was leaving the metro, a woman in the elevator with me, said right before the doors closed on us “Well ladies, it’s day one of our fight.”

I was so gobsmacked I couldn’t find the right words before the doors closed. Day one for you. Day 3,754,031 for everyone else. Recognize it. Acknowledge it. Embrace it and FIX IT. If you are just joining the party, welcome. But you have make-up assignments to do, and we’re checking your work.

I leave you with questions. Are you truly a feminist? Is your feminism intersectional? Was today a display of ally theater or are you actually interested in making the world a better place for all of us? YES. ALL WOMEN.

If you like this article, please share it! Your clicks keep us alive!
Tags
Women's March on Washington
feminism
intersectional feminism
all women
Scarlett Johansson
Amy Schumer
Madonna