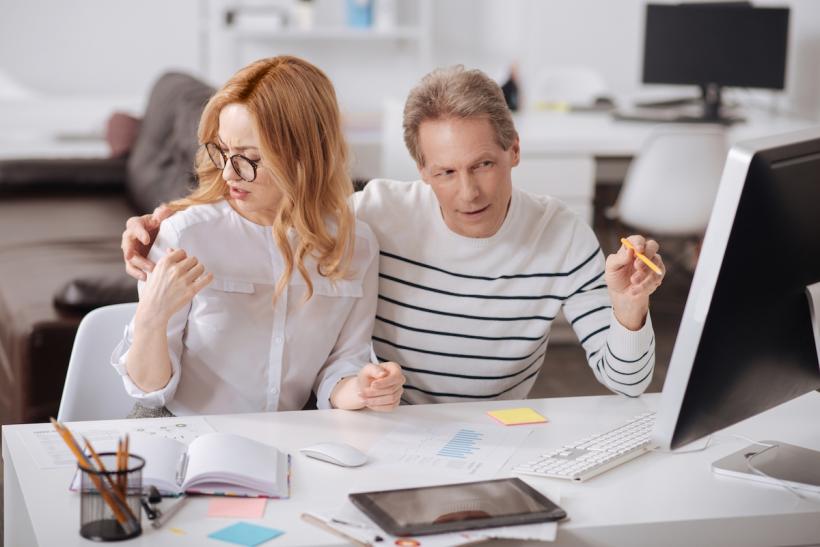 If all of these women at the top food chain are coming out with such terrible stories of abuse, you can only imagine what it’s like at the bottom.

After nearly 20 years of being in the television industry, I am finally coming to terms with the reason why I’ve continually tried to get out of the business. Let me tell you.

100% the abuse. 10/10 the abuse. It's abuse of all types — which I have profoundly experienced personally or witnessed. Verbal. Physical. Sexual. Mental. The entertainment industry allows abuse to flourish and allows abusers to hide behind fancy titles and big credits. With every company I have worked for, I’ve been made to sign forms about sexual harassment policies. It’s such a performative farce because these companies don’t take abuse seriously and rarely believe women. And as a freelancer, I always walk a tightrope, as my employment is easier to terminate, without so much of a discussion. Throughout my career in the television industry, I have had to take sabbaticals from the work I do —particularly after jobs where I’ve felt humiliated, abused, or mistreated.

Abuse is not a black and white thing. It’s a slippery slope. Because if you can be okay with employees yelling at and belittling production assistants (something I have witnessed on pretty much 80% of jobs), then you can be okay with the bigger things like sexual assault.

Because abuse isn’t about the sex. It’s about the power.

With the news breaking that Harvey Weinstein has allegedly abused countless women (including Asia Argento, Angelina Jolie, Cara Delevingne and Gwyneth Paltrow), I am feeling both relieved that people are FINALLY believing women and slightly triggered. Let me tell you. I believe EVERY. SINGLE. ONE. OF. THOSE. WOMEN. I believe all the women. I have worked with one of the women mentioned and if you’re reading this… I believe you. And I’m sorry I didn’t pick up my phone to you on site that day. Your abusive vice presidents were swearing at me in the White House Foyer, and I had had quite enough.

The stories are harrowing, but each one reminds me of a layer of abuse I’ve experienced during my time in “the business.” Stories like these make me feel both vindicated because I’m not the only one but outraged because no one should experience that sort of behavior in any workplace. And it’s commonly accepted as part of entertainment industry culture.

There's the camera operator (who still works regularly) who groped my rear end. I was a teenager. This man always tries to force hugs out of me when he sees me around. He knows he makes women uncomfortable, but it’s about power (god knows he’s been reported countless times and yet people continue to hire him).

There's the powerful industry leader who made me help him “get dressed” for the show. Because that's appropriate for a young woman to be doing with a married colleague.

There's the independent film director who touched himself in front of me.

But then there’s the verbal abuse.

The lighting director who got in my face at 2 am morning and screamed obscenities and swore at me until an IATSE rigger intervened. The time I was called a “fucking idiot” by the same man who made me help him dress for the show. (Dad, that’s the reason I turned down working at the Oscars.) The time an executive producer grabbed one of our production assistants violently and then later fired him. The time a vice president (of the company now in hot water) pushed his finger in my face in the foyer of the White House.  After the stuff I’ve heard and dealt with, the comment sections on the essays I write are cakewalks. And every time I’ve witnessed or experienced abuse — when I’ve reported it — it has always resulted in “not being called again” because I am freelance above all and can be dismissed with zero recourse. No one wants to call stuff out because you could be ending your employment.

Before I was 18, I collected checks bigger than most of my peers (I started working as a production assistant during summers and weekends at 16), and it’s hard to walk away from that sort of money.  While it’s more or less something I’ve fallen into in our unstable economy, production work has been a lifesaver when I've needed it most. On the best of shows, when everyone is behaved and professional, it can honestly feel like the best job in the world. But so rarely does that happen.

People keep asking: “Why now? Why are the victims speaking now?”

Because Weinstein is less powerful than he was 20 years ago.

Weinstein was once ranked as the most powerful person in Hollywood. And he used that power to ruin people’s careers. No longer. In a nutshell, it feels safer to confront his horrible past and get some closure, and there’s safety in numbers. They can’t go after all of you. In Ronan Farrow's reported piece, victims of Weinstein’s alleged abuse tell accounts of being hounded by Weinstein and the company for speaking about their experiences. “Weinstein and his legal team have threatened to sue multiple media outlets, including the New York Times,” The New Yorker piece reads.

Which is another reason why I believe the Weinstein company should dissolve and not be allowed to operate, regardless of a name change. It doesn’t matter if you change your name, it would seem many of their vice presidents knew what was going on and many helped to hide the abuse for years. We as a society are starting to call out abuse... at a glacial pace. But we are still feckless if we allow offenders to operate business as usual after weak apologies.

I for one am grateful for the voices of all the women. But how long will it take before men stand up for women when they see mistreatment of all types? How long before Hollywood stops keeping open secrets? How long before the entertainment business lays down firm rules for treatment of ALL employees regardless of rank, which includes verbal abuse?

If all of these women at the top food chain are coming out with such terrible stories of abuse, you can only imagine what it’s like at the bottom.

So now I’m watching, seeing which men will take the opportunity to speak out and follow through in the public eye of making the entertainment industry safer for everyone. How long before we see real change? Hopefully within my lifetime.

But for now, I am continually looking for other work.

My sister won an Emmy at age 19. That’s right. An Emmy (for production). And then she promptly left the business. Wanna know why? I bet you can guess.