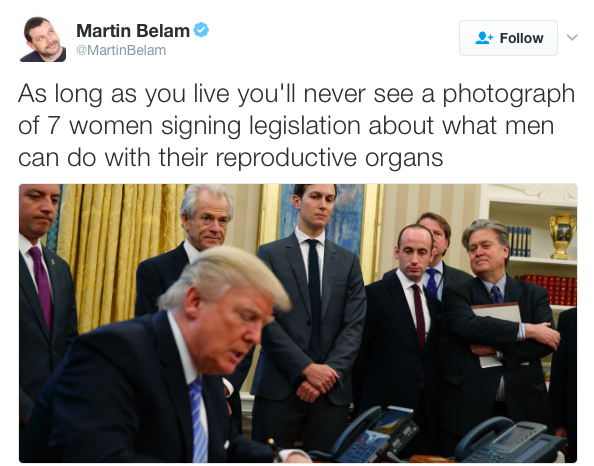 It looked a lot like the photo in 2012. The one of the panel of white men testifying on the Affordable Care Act regulations calling for health coverage of contraception. It prompted New York Rep. Carolyn Maloney to ask indignantly, “Where are the women?”

January 23rd’s photo featured another group of white men in the Oval Office, as they watched Donald Trump sign Executive Orders. One reinstated the “Global Gag Rule,” first put into play by Ronald Reagan in 1984. It bans funding to Non-Governmental Organizations (NGOs) overseas from providing abortions or offering information to women about the procedure.

If you caught Sean Spicer’s press conference (not the one on Saturday when he went off the rails), he answered questions about abortion services with the response that the Trump administration was going to stand for the “protection of life, born and unborn.”

This does not bode well for American women.

At the beginning of January, Rep. Steve King (R-IA) introduced H.R.490, which essentially caps abortion services at six weeks. It’s been called the ‘heartbeat bill,' because if a heartbeat is identified, “the baby is protected.” Many in the reproductive rights space believe that this type of legislation is an attempt at a bait and switch ruse. Push a six-week abortion ban bill, and then replace it with a 20-week ban as an alternative.

If those who are against a women’s right to choose want to eliminate abortion rights, the logic would be to support access to birth control and family planning.

Under Trump, with guidance from Pence, we have traveled back five years to the relitigation of abortion, and the issue that brought Sandra Fluke to national attention: Should health insurance cover women’s contraception as a preventative service, without a co-pay?

The goal of Republicans is to obliterate the access of women to good, cost-effective health services under both the ACA and Planned Parenthood.

What exactly does this mean? A potential reversal of the main elements baked into the ACA including:

Why is Planned Parenthood the favorite whipping boy of the Republicans? They are obsessed with promoting the disinformation that the organization uses federal taxpayer money for abortions.

Unfortunately, Mike Pence didn’t learn anything from his experience of closing down Planned Parenthood facilities in his state. The shuttering of the Scott County office, due to lack of funds, ended up creating an HIV outbreak. It was the area’s only place to get tested.

Planned Parenthood is the main provider of women’s health services in the United States.

Many of their clients are low and middle-income women, women of color, and adolescents seeking sex education. Planned Parenthood has been the driver of the present thirty-year low in unplanned pregnancies.

House Speaker Paul Ryan (R-WI) has been at the forefront of pushing the defunding of Planned Parenthood. In response, angry women have flooded his Congressional office with calls. His response? He blocked his phone and fax numbers and refused the delivery of petitions to his staff. (So much for democracy.) Women are countering by mailing postcards to his home address in Janesville, Wisconsin with the messages, “No Defunding Planned Parenthood” and “No to Repealing the ACA.”

On his first working day as President, Trump and his team made the decision to put the Global Gag Rule back into play ⎯ throwing down the gauntlet with deliberate optics. Cecile Richards, president of Planned Parenthood, noted in an on-air interview that the Trump stipulations were far more “extreme than under George W. Bush.”

Maybe it was Trump’s response to the Women’s March.

Regardless, it’s time to organize at the grassroots level.