The Women’s March On Washington: White Women, It's Time To Walk The Walk 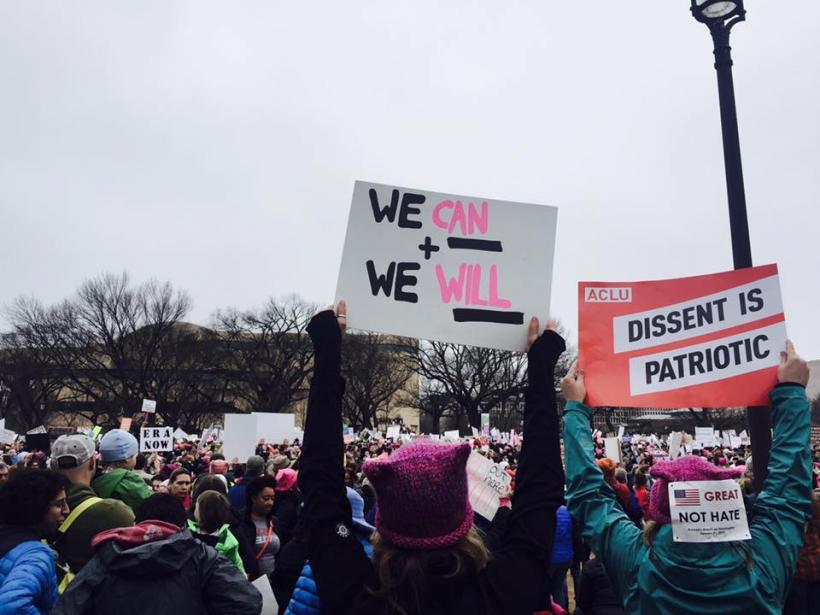 People all around the world in over 600 cities stood up, many for the first time, ready to be heard. (Image: Bryn Huntpalmer)

The night that Donald Trump won the presidency (using the term "won" loosely of course), I was one of those blindsided white women who was truly shocked, who said to myself — How can America be this racist? How can America be this sexist? How can SO MANY American white women let us down like this by voting for, not only the vilest and most offensive candidate we've ever had, but also the least qualified for the job?

And in place of an exceptionally qualified WOMAN?! Just HOW?!

I had diarrhea and stomach cramps for days; I cried, I couldn't think straight. I was constantly struggling with this swirling circle of the different stages of grief. One minute I was in complete denial and the next I was in full on rage.

I was embarrassed that so many people that looked just like me had voted for this man. I was afraid that others would look at me and wonder if I was part of that 53% of white women who voted for Trump. I wanted to wear a big sign across my head that said: "Don't worry, I voted Hillary."

Yes, I voted for Hillary, but aside from voting for her and posting articles on social media about how awful Trump was and how qualified Clinton was, I didn't do a whole lot else. In fact, I've never done a whole lot of walking the walk in my life. The morning after the election I was drowning in grief, but I was also fired up and ready to go!

I vowed to stop sitting back and to fight for what I believe in.

To stand up for those who need standing up for. To start listening to and learning from those who have been fighting these fights since forever.

When I saw the plans for the Women's March on Washington, I immediately made plans to attend the local march in my hometown of Austin; but after a few flight checks and discussing logistics with my husband (we have two young kids), I decided to go to D.C. I texted a few of my girlfriends and one of them got on board as well. I finally had something to look forward to, a tiny glimmer of joy after the awful reality we were handed on November 8th.

I had no idea what to expect from the march, and although very excited, I was also a little nervous. I shared with friends about my nervousness and quickly learned I wasn't alone. None of us had done anything like this before; many marchers had never even been to Washington D.C. before. Many marchers probably never would've forked over the cash to travel to see Hillary Clinton's inauguration no matter how strongly we supported her candidacy. But this was different, we all felt a strong pull to just, be there.

Yes, I'm embarrassed that it took the election of a man like Trump for me, an upper middle class white woman, to wake up; but, shouldn't we be encouraged that so many people are waking up? I know I am.

I arrived in D.C. on inauguration day on one of those flights that were 99.9% women, most of whom were wearing their #pinkpussyhats. We were in the air when Trump was sworn in as president. The energy of having so many women together who all felt the same gut punch on election night was exactly what I needed to get through the reality of that moment.

When we finally got off the plane and headed to where we were staying, the city was practically deserted. Residents traditionally work from home on inauguration day because there are so many closures and usually large crowds. Since Trump's inauguration drew such a small crowd, the city was eerily quiet.

We did see a handful of Trump supporters, and when I say handful, I mean a handful. We traveled on several metro trains and walked around the city a bit on Friday and maybe saw nine identifiable Trump supporters all day. To be fair, we weren't near the Capitol where the inauguration took place, but still, it was very obviously quiet in the city — a sharp contrast to what I would experience the next day.

The morning of the march we woke up early and walked to the nearest metro station. It was flooded with people, mostly women, and it was clear that it was going to be a very very long wait, so we decided to walk the 3 miles instead. There were charter buses dropping marchers off nearby, and floods of people walking alongside us towards the Capitol.

This journey to the march was probably my favorite part. We were all so amped up, and the residents of D.C. were out on their front lawns cheering us on. Yards were lined with signs and young kids were standing with their parents chanting things like "dump Trump on his rump." I thought of my kids back in Austin (just three and five years old) and teared up thinking about them going to the sister march on Austin with their dad. 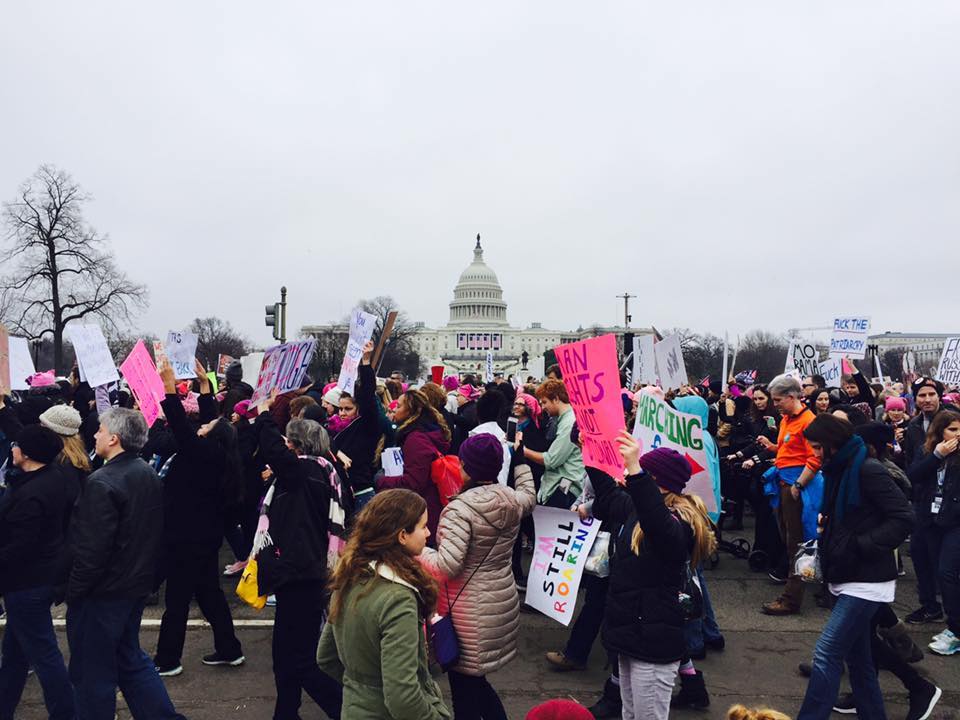 A local church opened its doors to marchers with coffee, food, and bathrooms. We regrouped (ahem, peed) at the church and made the final push to the Capitol where we would be met by the largest crowd I have ever seen. Estimates say that there were 2.5 people for every square meter and at times it felt much more crowded than even that.

As we made it closer and closer to the Mall, we realized that we should have gotten there before dawn. The crowd size was more than double what had been anticipated; it was a sea of people — women, men, and children (mostly women) flooding en masse in all directions. We had no idea where the stage was and couldn't hear any of the program. One of our first orders of business was waiting in a line of 500+ women to use a port-a-potty that had run out of toilet paper by 10 am.

But you know what? No one cared. No one complained.

We lucked out that my friend's husband happened to be 6' 7" and served as our navigator and beacon all day. There's no way our group of eight would've stayed together without our tall friend. He was able to weave us in and around the crowds to different areas of the march, but we never could get close enough to hear or see any of the program. Guess what? No one complained about that either.

We were just happy to be there. Happy to be standing with our brothers and sisters of all backgrounds. Happy to finally be walking the walk.

When we got the AP news update that the route for the march was so flooded with people that it was a physical impossibility to actually march, we were thrilled. What a fantastic problem to have. Again, no complaints. Some people stayed on the Mall, but most of us began to disperse in every direction.

Just by the natural flow of people leaving the center of the city, marches began to emerge on every street. We continued to chant and hold our signs high, as half a million people marched through every vein of the city center of our nation's capital. It felt like a march on the entire city, the entire country... And it felt damn good. 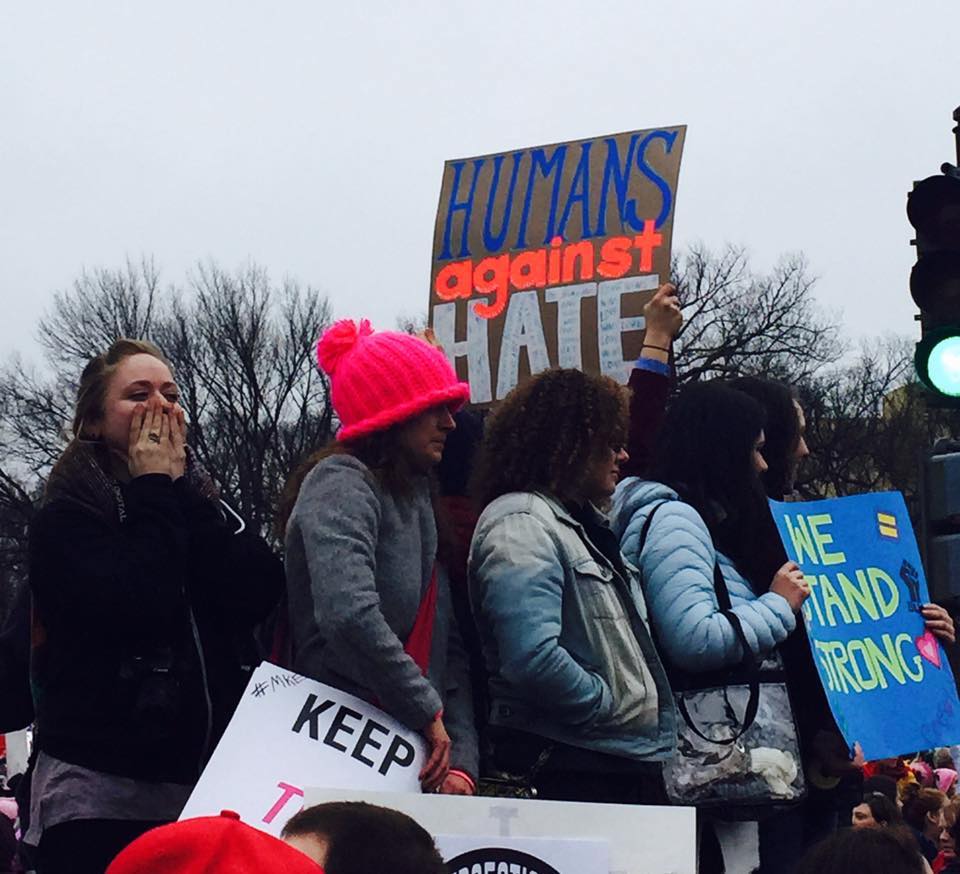 I rode that high (and very little sleep) back to Austin only to be confronted with an online war between marchers and non-marchers. I won't get into all of the reasons some felt that the march was a bad thing, and I'll be the first to admit that I haven't shown up in the past.

Yes, I'm embarrassed that it took the election of a man like Trump for me, an upper middle class white woman, to wake up; but, shouldn't we be encouraged that so many people are waking up? I know I am.

At the march, there were signs about everything — women's rights, LGBTQ rights, Black Lives Matter, climate change, education, support for immigrants, and so much more. We were all there for different reasons, but we were also all there together with one goal — to make a statement. To show that we won't be silent. People all around the world in over 600 cities stood up, many for the first time, ready to be heard.

No, this day wasn't the "work" that needs to be done, but for many of us, it was the starting gun. 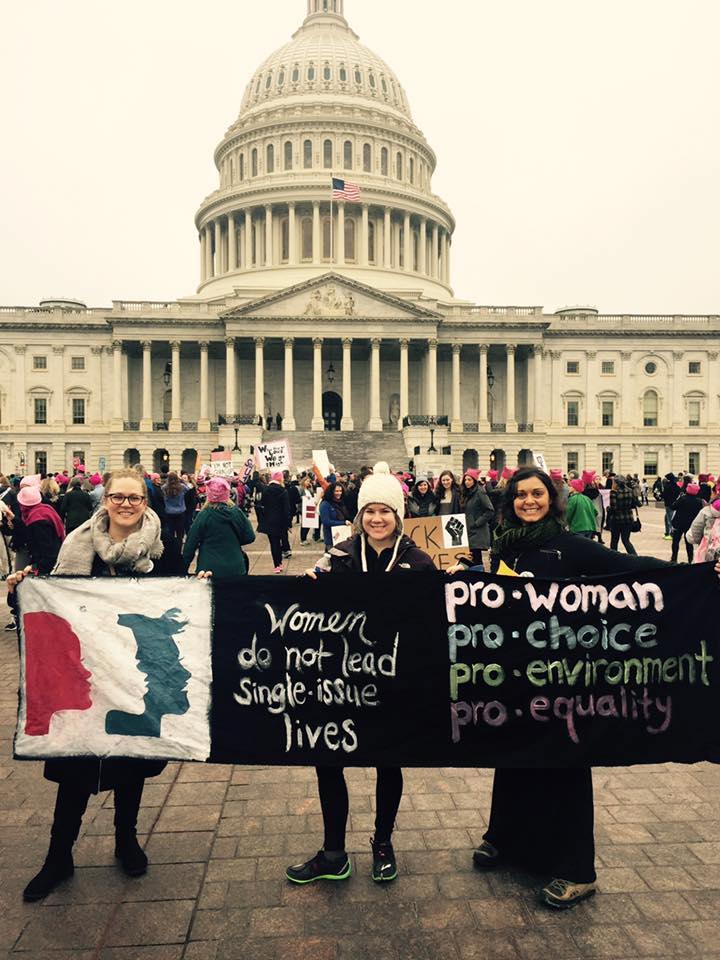 If you like this article, please share it! Your clicks keep us alive!
Tags
Women's March on Washington
Trump
protest
inauguration

The Women’s March On Washington: White Women, It's Time To Walk The Walk
Bryn Huntpalmer