5 Ways To Be A More Minimalist Parent 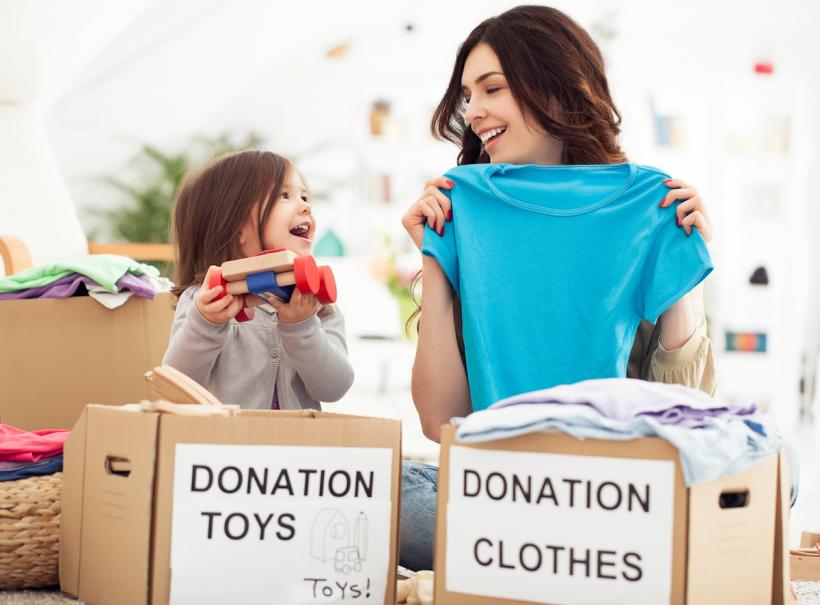 If you are starting to transition to a more minimalist home, it can help to get your kids involved in the process.

With the new Minimalism documentary trending on Netflix, a lot of parents are feeling the holiday hangover while they watch, desperately trying to find new places to stuff the superfluous overflow of toys and other gifts from Christmas. Buy less. Live a more meaningful life. We probably should have been watching this BEFORE we bought everyone and their mom scarves, candles, and weird Christmas tchotchkes.

Minimalism is great in concept, especially when you’re looking at someone else’s well-curated life. Declutter, simplify, own only things that bring you joy. This is all well and good for the twenty-something living in a one bedroom apartment, beholden to no one. When you’re a parent, however, minimalism gets a lot more complicated. While the documentary glosses over a couple of minimalist families, you don’t get to see how they live or how they do it, which might leave you wondering how the hell minimalist parenting works.

I’ve been trying to move my family closer to a minimalist lifestyle for years now, and while I think I’ve done a pretty good job, it will always be a work in progress. It’s a way of living, not a destination you reach, and the journey is more difficult with kids along for the ride. But if you’re feeling inspired to become a more minimalist parent, I’ve got a few tips and tricks I've picked up along the way that have helped keep at least some of the clutter at bay.

If you are starting to transition to a more minimalist home, it can help to get your kids involved in the process. Especially when paring down their belongings, give them a sense of control over what stays and what goes. Try to keep the focus on what they will gain (more space to play, an easy-to-clean room, access to the toys they love most) rather than what they are giving up. But on the flipside…

Declutter when your kids aren’t watching.

The aforementioned method works really well with my son, who has picked up on my minimalist tendencies over the years. My daughter, on the other hand, is a hoarder of epic proportions. If she sees that a rogue happy meal toy with a missing arm is atop a box of donations, she will pick it out and wax poetic about how beloved it is. Nevermind that she hasn’t played with it since the day she got it, it is precious, and she needs it. Sometimes it’s best to sneak things out under the radar before anyone realizes their neglected toys are gone.

When it comes to big holidays and celebrations such as Christmas and birthdays, steer the focus away from material gift giving. Maybe instead of a physical gift, you can splurge on a special trip or experience. Concentrate on spending time together, doing things with emotional significance. Help your kids adopt the mindset that celebrations should be more about acts of love than tokens of love.

Talk to the grandparents, and do it now.

The thing about gift giving with kids is that you can only control your own gifting. Everyone else is still going to want to rain toys down upon your house, especially grandparents. Christmas may be 11 months away, but now is the time to start bringing up your new minimalist goals with your parents and in-laws. To be honest, it took a couple of years before my kids’ grandparents (on both sides) started to rein in the gifting. Make sure you suggest alternate options, like gifting experiences or taking the kids on a special trip, so you don’t come off as ungrateful for their generosity. Give them other ways to show their love.

When you’re dealing with a whole household of people, going minimalist can seem overwhelming. The truth is, you can’t actually “convert” your family to minimalism if they aren’t willing (and newsflash, they probably aren’t willing). The only person whose “stuff” you have control over is your own. Yes, you can try to battle back at the influx of toys or secretly throw away your husband’s ratty work shirts, but at a certain point, someone is going to notice and resent the hell out of you. Minimizing your stuff is enough. Plus, if you benefit from living with less, your family may just want to jump on board, or at least do a bit of decluttering on their own.

If you like this article, please share it! Your clicks keep us alive!
Tags
decluttering
minimalism
the simple life
minimalist
parenting