Steve Bannon Is Dangerous — Here's What You Can Do To Stop Him. 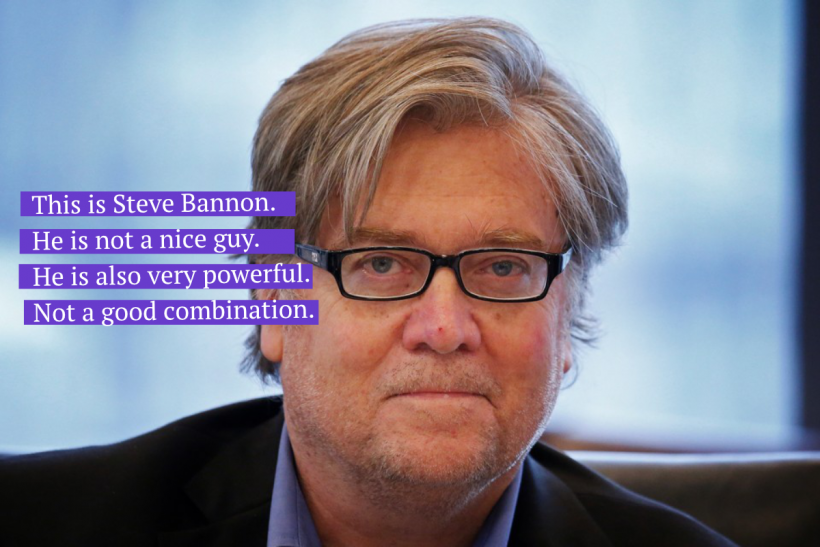 So. Let’s talk about Steve Bannon for a bit, shall we?

I had literally never heard of Steve Bannon before the 2016 election elevated him to a household name. Trump plucked him out of the morass of conservative clickbait known as Breitbart News and used his expertise at moving internet trolls to action as a launching pad for his election. Since November 8, Bannon has only grown in stature, now looming over the American political landscape like some sort of Godzilla-sized Pepe the Frog meme.

But really, who is Steve Bannon? There’s a lot to dig into with this guy. To start with, he’s a Navy vet. That’s nice, right? He did some actual service in the name of our country. Let’s give him credit for that.

Aside from Navy service, Bannon worked for Goldman-Sachs, where he presumably made boatloads of money. He became a Hollywood investor and later a director where he helmed such projects as a documentary of Sarah Palin called The Undefeated. I kind of wonder if he knows what “undefeated’ means since Palin was on the underside of a presidential ticket that was defeated SO HARD by Obama and Biden. But I digress.

After his Hollywood years, Bannon took over at Breitbart, where he oversaw such insightful articles as one “Birth Control Makes Women Unattractive and Crazy," "The Solution to Online ‘Harassment’ Is Simple: Women Should Log Off,” and another saying, “Hoist it high and proud: The Confederate flag proclaims a glorious heritage.” (These links won’t take you to Breitbart, I promise. They’re articles about Breitbart on other sites that don’t promote filth. You can safely click them.)

On a personal note, Bannon was accused of domestic abuse by his ex wife, who also said in court papers that he objected to a particular private school for his kids because he didn't want them going to school with Jews.

It was after all this that he was tapped to mastermind the alt-right-style populist rise of Trumpism. Even after the campaign, Trump has kept ol’ Steve close to his side, naming him senior policy advisor and giving him a seat on the National Security Council.

You’re probably asking yourself what business does a guy like this have deciding matters of national security for the entire United States? Never mind that political advisors have NEVER been welcome on the NSC, since when do clickbait editors with a history of alleged spousal abuse and a hard-on for the Confederate flag get a seat in the Situation Room? WHO THE HELL DOES STEVE BANNON THINK HE IS, ANYWAY?

Comb through past Bannon statements and you’ll find he allegedly said things like “Lenin wanted to destroy the state, and that’s my goal too. I want to bring everything crashing down, and destroy all of today’s establishment.” Just last week, he told the New York Times that he regards the media as “the opposition” party and suggested the media “should keep its mouth shut.” He gives every appearance of being a man with no respect for institutions, along with his apparent disrespect of women, liberals, his ex-wife, people of color, Jews, and I’m sure the list could go on. His history is alarming and giving him a seat at the national security table is troubling in the extreme. I’m not even sure he could pass a security clearance if he didn’t have the President on his side. But here we are.

The short of it is, Steve Bannon is consolidating power in the White House and nobody can tell what his ultimate goal is. Nothing in his past gives me the confidence that he cares for anyone other than Steve Bannon. That’s not a mindset that lends itself to selfless public service. Quite the opposite, in fact.

What will he do to America as he pursues his own motives? I don’t know, and I’m very sorry that I have to find out. For now, I'm taking action in the following ways:

Contact your representatives and tell them what you think. It's literally their job to listen to what you have to say. Please remember to keep the calling to your own district. Your complaint will not be recorded if you live outside the jurisdiction of a given representitive. Start the call by stating your first and last name, city, and ZIP code. That should help ensure you're talking to the right people and that you also mean serious business.

Add your name to this statement from the Southern Poverty Law Center.

Support journalists however you can, be it financially or through your own platform. Bannon has made it clear that this administration will not be friendly to the press, and we need to protect individual journalists from Big Powerful Governments however we can. Here are some great places to start.

What are you doing still reading this? Go get to work! Create hope in the dark! Resist!

If you like this article, please share it! Your clicks keep us alive!
Tags
Steve Bannon
Trump administration
Politics
Is This Real Life