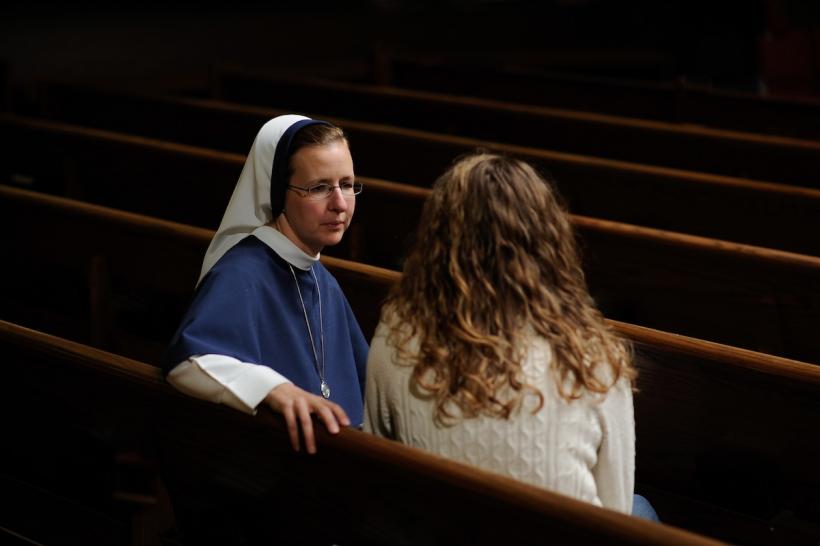 I spent nine years attending Catholic School. I’m pretty sure I would have been there for twelve if the grades offered went beyond the Junior High School structure of the mid-seventies. I would have gone not only at my parents insistence, but because I didn’t hate it. In fact, I liked it.

So why am I saying the years of daily catechism and required church attendance were a fail? Because I’m not entirely sure it was their intention to turn out an uppity, pro-choice feminist in the end. Of course, my mother and grandmother probably had a little to do with it, whether or not that was their intention.

My grandmother was married off as soon as she’d completed eighth grade to a man much older than she. He abandoned her when she had one child in diapers and another in her belly. She worked as a housemaid to support herself and her children. Eventually, she obtained a divorce from her absent husband to marry my grandfather. The Catholic Church excommunicated her for this sin, which essentially meant she could no longer receive the sacraments.

My grandmother never stopped attending mass, even though she couldn’t receive communion and, when the end of her life came, would not receive the last rites or a mass of Christian burial and interment in the Catholic cemetery. She still raised all of her children in the Catholic faith, though she herself was not a welcome member.

I see her as woman who would not let a patriarchy that lays the blame of all human suffering at the feet of Eve — and every woman who followed — take away something that she loved.

It would be easy to construe my grandmother’s insistence on clinging to a religion that cast her aside as being manipulated by the Svengali-like hold of an oppressive cult, but I don’t see my Grandmother as mesmerized, or even as a victim. I see her as woman who would not let a patriarchy that lays the blame of all human suffering at the feet of Eve — and every woman who followed — take away something that she loved. They may have excluded her from the sacraments that are the very tenet of Catholicism, but she defied them by continuing to receive the spiritual benefits of her faith until her dying day.

My mother married outside her religion. As a Catholic, that meant she had to obtain dispensation, or, permission to do this from the Bishop of her diocese. This is still a practice today though it’s rarely, if ever, denied. Mostly it entails making certain promises to continue to abide by the Catholic faith in the face of spousal influence of other or non-religious belief. The irony in my parents case is that my father was an Orthodox Christian. If anything, he would have influenced her toward more strident Christian doctrine. In reality, though, they were both progressive in their religious views.

Being a modern, post war couple, they set up housekeeping and started their family, which they willfully limited to four children. My mother went to confession every Saturday and whispered that she practiced birth control. Her parish priest was understanding and lenient. After revealing her wicked ways, mother would kneel in the pew outside the confessional, say the required number of Hail Marys and Our Fathers to be forgiven of her sins, then return home to her wifely chores — minus the duty of submitting to her husband’s sexual needs. On Saturday nights, the Catholic Church effectively cock-blocked my dad. Mom refused intercourse so that she could receive the sacrament of Holy Communion on Sunday without the black deed of using birth control sullying her recently scrubbed soul.

This was working just fine for everybody involved until a visiting priest took my mother’s confession one fateful Saturday. At my mother’s expense, he held a fire and brimstone meeting for the entire church of waiting confessors to hear — a ranting holy man accusing my parents of murder, screaming that my father may as well slit the throats of the children they had and take a butcher knife to cut any more babies God gave her from her belly.

Unlike my grandmother, my mother stopped going to church from that day forward — and my father’s Saturday nights improved greatly. Still, my siblings and I were all sent to Catholic school, expected to attend mass, and received confirmation when the time came. Which we all did dutifully, with the exception of one.

The age at which a Catholic confirms his or her faith varies slightly among dioceses. When I was a child, Holy Confirmation was made around the sixth grade. It required lengthy preparation, which we completed within the structure of our regular religion classes. My class had been schooled and rehearsed, right down to the proper way to bow when kissing the bishop’s ring. Then, the powers on high decided that children only twelve or thirteen years old were too young to make an informed decision about their faith (probably true). The age of confirmation was changed to sixteen. After all of our hard work, we were not to be confirmed.

Four years later, with all of us attending public school, my classmates were receiving instruction for the sacrament a second time at Wednesday night catechism, while I was home watching The Sonny & Cher Comedy Hour. “If I wasn’t good enough to be confirmed the first time they prepared me, then I guess I’m no better now,” I told my parents. And with that, I stopped going to church.

There are many formerly Catholic women who resent their religious upbringing, especially those who also attended Catholic school, and even more so those who suffered the rigorous religious instruction beaten into them — sometimes literall —, prior to reforms via the Vatican II Council. Though I no longer consider myself a Catholic, nor do I belong to any organized religious group, I am not one of those disgruntled women.

So while it may not have been their exact intention to raise a well informed, socially aware, critically thinking feminist, that’s precisely what my grandmother’s Catholic church did in my case.

My grandmother didn’t let a little thing like excommunication bar her from her religious faith. My mother didn’t let an over zealous and likely unhinged priest shame her. Neither of them allowed humiliation in the face of their entire congregation to drive them away from faith. Despite overt patriarchal oppression of their feminine humanity and because of their personal conviction to stand for their rights, even if in silent opposition, I was privileged to receive the best private education a girl could have via their parish’s Catholic school system. An education that included the study of not just reading, math, science, and a fair understanding of Latin (long since forgotten on my part), but also of all major world religions, the history of global warfare, and human reproduction and sexuality.

Yes, that’s right. In eighth grade, at a Catholic school not bound by federally approved curriculum, all students completed a comprehensive course in sex education. I recently came across the description and course outline for that class in a box with other mementos of my youth. It reads like a college level syllabus for human anthropology and cultural norms.

So while it may not have been their exact intention to raise a well informed, socially aware, critically thinking feminist, that’s precisely what my grandmother’s Catholic church did in my case. I cannot thank them enough, and I’m only a little sorry it didn’t quite work out for them.

If you like this article, please share it! Your clicks keep us alive!
Tags
catholicism
Catholic school
sex ed
religion
feminism
sexism

Not Your Grandmother’s Religion: Why My Parochial Education Was A Big Fail
Judith Liebaert

Here's The Thing About Dieting: It Just Isn't Worth It
Judith Liebaert