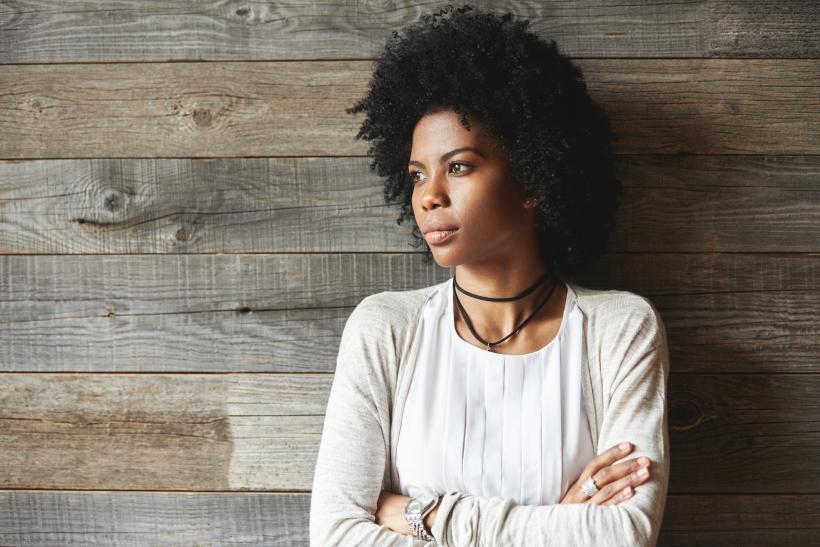 "The only realistic way for me to deal with the contradiction between thick thighs that suggest mental wellness and the perpetual self doubt that offers an attenuate implosion is to welcome the contradiction with open arms."

My depression has been debilitating at times--coping with the accompanying anxiety is significantly more difficult when you exist in a society that does not accept the way your depression manifests itself. My nappy hair, my chocolate skin, and my thick frame incite contempt rather than empathy. People's dismissal and my physical appearance are inextricably linked.

Growing up, the person I looked up to most was my mother. She never complained about my father leaving. She never asked him for child support. She never talked about mental health--hers or mine. But maybe she should have done all those things.

I inherited her silence and strength. For a long time, I wore it like a badge of honor.

My mother might have cried in front of me once my whole life. She usually dealt with struggles through humor. She was a single mother with three children working as a janitor and battling addiction. Stress and poverty killed her on Easter, before her 43rd birthday. I inherited her silence and strength. For a long time, I wore it like a badge of honor.

Like my mother, most people consider me an extrovert. I’m fun at parties, I joke around, I introduce myself to strangers. Nothing about me reflects the somber, feet-dragging image most people have when they think of depression. That’s what’s frustrating, though. A lot of Black women dealing with depression are not allowed to express it because our depression doesn’t look the same as it would in other people. People also assume that being depressed means you don’t eat or get out of bed. Since I am a pleasantly plump woman who also works out every morning, there’s no way I could be depressed.

I wanted to look as white and non-threatening as possible because the invisibility of my disability in conjunction with the vulnerability of being a Black woman was absolutely unbearable.

There’s also this myth that loud Black women are more narcissistic than sad. As someone who has blown up over accumulated microaggressions, I can tell you that the resulting reprimand from my supervisor was not something I deserved for being "unable to take a joke."

How I look (and how I feel about the way I look) can be directly tied to my depression. I felt ugly as a dark skinned girl. I chemically straightened my hair despite how painful it was. No matter how many scabs I got from the bi-monthly relaxers or how big the clumps of hair were as the neutralizing shampoos stripped away my natural moisture, I kept up the routine for years.

Like many Black women who forsake their naps for a less aggressive hairstyle, back then I would have rather been bald than too Black.

I stayed out of the sun, even though running track and cross country brought me joy. I tried to eat less so my curves would go away, despite the generations of women in my family who were genetically voluptuous. I wanted to look as white and non-threatening as possible because the invisibility of my disability in conjunction with the vulnerability of being a Black woman was absolutely unbearable. The stress of that double consciousness plunged me deeper into a rage-filled depression that I had no place to explain. I was just an ugly, angry Black woman.

Suppressing my irritability became a way of life for a long time. When a white coworker screamed and cursed at me for quoting emerging Black female scholars, I kept quiet to avoid looking like an angry Black woman, then was praised for my restraint. When I got loud with that same white coworker after he suggested I wear my hair straight more often to look professional, I was called into the HR office to discuss how I need to be “more cheery.” Getting ready for work in the mornings made me anxious, which usually led to an argument with my partner. I felt guilty about responding to inappropriate comments, but I also felt guilt about not responding — like I was letting someone down no matter what I did.

There were really only a limited number of narratives I could ascribe to: an angry Black woman, a strong Black woman, or a THOT. None of these allowed space for the recognition of my disability, and none of them were particularly forgiving about my physical appearance.

Once I started embracing my natural hair, curves, and dark skin, I also came to terms with my very real post-traumatic stress. From being the only Black girl in the class/office to being constantly accused of "pulling the race card," microaggressions have made me feel sad and angry simultaneously with little reprieve. The way I express my gender and identity now, though, recognizes all the parts of my identity.

Depression still limits me in many ways, but my recovery has stemmed from embracing who I naturally am.

Black women are known in our community for being back breakingly strong. We are expected to pray the sadness away while still supporting the whole race and making it to work on time. We are not allowed to be depressed. There’s not enough time for us to cry. Getting help is out of the question because even if we were allowed to acknowledge the things that hold us back, it would be considered irresponsible to spend ‘good money’ on therapy or coping strategies.

The only realistic way for me to deal with the contradiction between thick thighs that suggest mental wellness and the perpetual self doubt that offers an attenuate implosion is to welcome the contradiction with open arms. While I definitely recognize my triggers now, it is still tempting to stay silent. I try to adopt Audre Lorde’s revolutionary spirit of self care as much as possible, but it’s hard. Over time I have accepted that sometimes being a strong Black woman also means allowing myself to have moments of weakness.