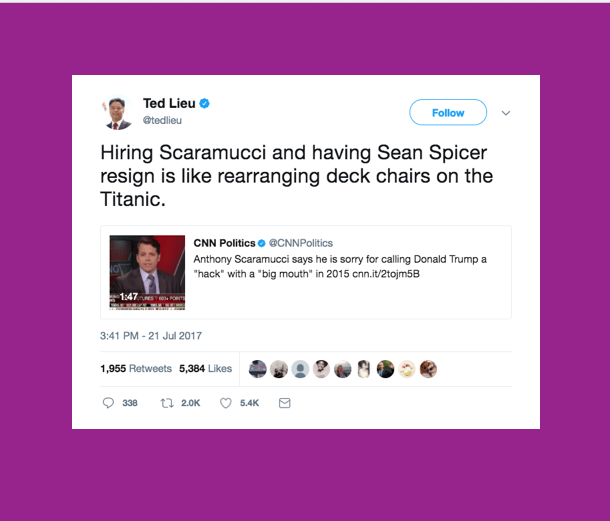 If you think that hiring a guy whose main communications experience is being combative on cable news is a bad idea, you’re not alone. White House Press Secretary Sean Spricer resigned today, allegedly because he disagreed with this hire. (Image Credit: Twitter/@tedlieu)

Happy Friday, wonderful readers! We have all made it through another madcap week here in 2017. All kinds of groovy things have been going on — and by groovy, I mean things that make everyone ask:

Dude, is he on drugs? No? Then am I on drugs? Because this is all too weird not to involve drugs.

First, we have Senate Republicans carrying on their campaign to prove that they don’t have to do what Obama says. They are trying their damnedest to find a way to dismantle Obamacare despite the fact that patients, doctors, nurses, hospitals, and insurance companies keep telling them not to. Why are they persisting? I have no fucking clue. Probably because they can cut taxes for rich people if they do this and that makes them feel warm and fuzzy inside.

Next, we have the White House exploring ways to undermine Robert Mueller and his team of investigators. It seems like that Russia investigation makes Trump uncomfortable and he wants it to go away. He’s reportedly even considered firing Mueller. Trump told the New York Times that he doesn’t want Mueller looking into his business dealings. Shortly after that, we found out that Mueller has been looking at Trump’s business dealings.

Clearly, Mueller gives no f*cks what Trump thinks of him and I am so here for it.

When asked about health insurance in that same interview, Trump said, “Because you are basically saying from the moment the insurance, you’re 21 years old, you start working and you’re paying $12 a year for insurance, and by the time you’re 70, you get a nice plan. Here’s something where you walk up and say, “I want my insurance.”

He really said that. I’m not making it up. And I’m not on drugs. The President of the United States has confused health insurance with life insurance. Or possibly with a layaway plan at a big box store. I just don’t know.

Finally, the White House announced that Anthony Scaramucci will be the new White House communications director. Scaramucci is a hedge fund manager from New York who has no prior history doing political communications at any level. If you think that hiring a guy whose main communications experience is being combative on cable news is a bad idea, you’re not alone. White House Press Secretary Sean Spricer resigned today, allegedly because he disagreed with this hire.

If all of this is confusing and upsetting, yeah. I get it. So here’s a GIF of puppies to finish this article. Enjoy the puppies, enjoy your weekend, and here’s hoping next week feels less like a hallucination.