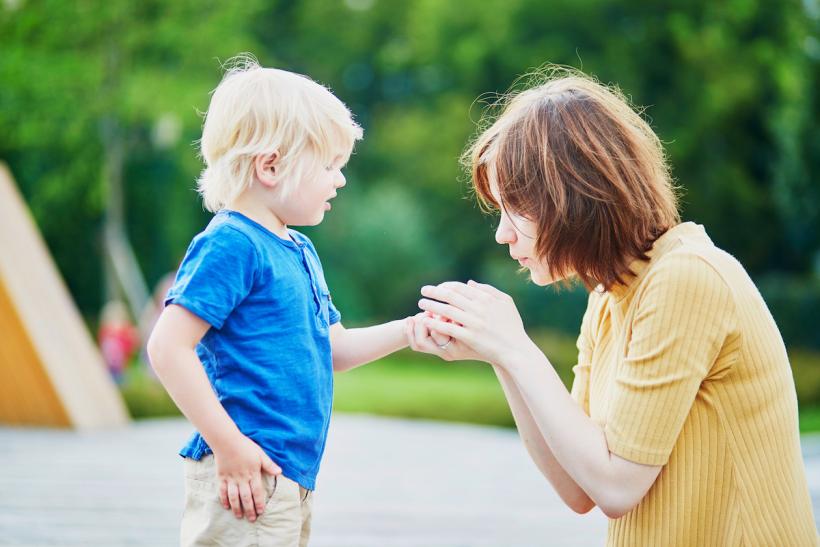 Being a mom with anxiety, hard as it is, is actually the only kind of mom I want to be.

I’m one of the least anxious parents I know.

When my girls were little, I skipped almost every well-child visit and never called the doctor for the run-of-the-mill fevers and runny noses my friends seemed to flip out over. My babies’ rosy cheeks, twinkling eyes, and abundant rolls told me all I needed to know; I was satisfied they were hitting their milestones and didn’t need a doctor to tell me where they were on the growth chart.

I was the first of my neighborhood parent cohort to let my oldest child take public transportation by herself. When she was just 10, I sent my daughter off on a New York City subway train from Brooklyn to Manhattan nearly every weekday, brushing nervous tears from her cheeks and assuring her that she was a big girl and she’d be fine.

When it was time to apply for high schools and all the other parents were going out of their minds with worry, filling their schedules with dozens of open houses and lining up around entire city blocks to take school tours, I went on exactly three tours and half-assed the application, listing only five choices instead of the recommended twelve.

At 15, I let my daughter move to another state, a six-plus hour drive away from her little sister, her father, and me, so she could study ballet. When she didn’t get a spot in the student dorm and I was trying to find another place for her to live, considering signing a lease on an apartment she’d share with other students (and no adult), a friend with a daughter the same age – we’ve been close since we were both pregnant — said to me incredulously, “You know you can just say no to all this, right? You can make her stay home and be a regular kid.”

In the end, a spot opened up in the dorm; I sent her off and all was well. But my friend’s comment did make me wonder — why am I so laissez-faire when it comes to parenting? It doesn’t make sense, really.

Because while I may be the least anxious parent in all of Brooklyn, I actually suffer from clinical anxiety.

Yup. Like approximately 40 million adults in the United States alone, I have an anxiety disorder. I suffer from panic attacks on a fairly regular basis and carry Klonopin in my bag at all times in case one hits. My younger daughter calls them my “breathing pills” and knows to get one for me, along with a glass of water, when she sees me double over and start to wheeze.

Here’s the thing, though: my anxiety isn’t triggered by anything specific. It’s not based in reality. Or maybe it is, a little bit, but it’s nothing to do with my kids. It started when I was in an abusive relationship, and worsened when I was homeless for a while. But things can be going perfectly well in the moment, and I can still have a panic attack. My doctor explained to me that sometimes emotions bypass the brain and manifest in the body — so I’ll be thinking everything is fine, and then suddenly I won’t be able to breathe.

Once I’ve had a panic attack, I’m more susceptible to them in the days to come; if you’re a migraine sufferer, you might be familiar with this phenomenon. It’s as if my body has learned to do a great trick and wants to keep on doing it. Winter tends to bring them on, because I have to bundle up in a coat and scarf, and that makes me feel like I can’t breathe, which kicks off an episode. Crowded trains can do it too. But thinking about my daughter living in another state, far away from me, never makes me panic — although maybe it should.

Being a parent is hard. Every phase is difficult in its own way: from waking up throughout the night to feed your tiny newborn and worrying about what color her poop is (yellow is good, green is bad), to kissing them goodbye on their first day of preschool, to being in charge of teaching them how to navigate the world as an independent person. I have a lot of trouble with that one. It’s hard enough for me to take care of myself, with my anxiety and depression. Oh yes, did I mention? I struggle with depression, too.

But just like mental illness doesn’t preclude you from having a healthy relationship, it doesn’t make you a bad or unfit parent, either.

In fact, sometimes I think it makes me a better one. I can’t be a helicopter parent — I just don’t have the energy. I can’t spend all my time micromanaging my children, or getting up in their business, or trying to prevent them from growing up. My girls have known from early on that I’m not infallible, that I often need their help, and that it’s important to practice good self-care. What kids need most is love, trust, and plenty of strong boundaries to bump up against. Those are all things I know how to provide for them, because they’re the things I need, too.

My anxiety makes it important for me to know what the rules are, that I’m safe, and that I’m going to be taken care of. I have to love and trust myself enough to give myself all of those things — and I do. When I’m freaking out, I breathe, drink some water, and tell myself this too shall pass and all shall be well. When my kids are freaking out, I do the same.

Being a mom is hard. Having anxiety sucks. But being a mom with anxiety, hard as it is, is actually the only kind of mom I want to be.

If you like this article, please share it! Your clicks keep us alive!
Tags
anxiety
anxiety attacks
anxiety disorder
parenting
motherhood