Take The Cake: A Fat Feminist Watches 'I Feel Pretty' 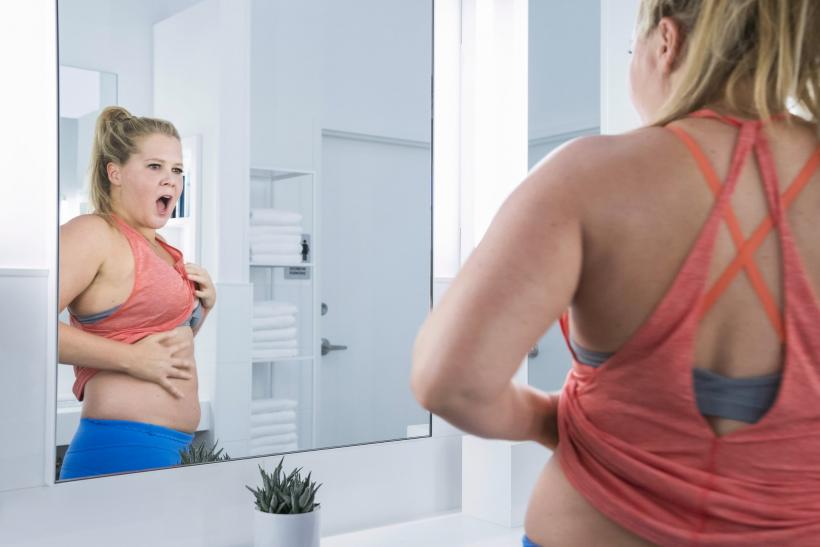 I asked one of my smart, fat poz friends, Isabel Foxen Duke, to be my date to the screening of Amy Schumer’s newest film, I Feel Pretty.* This was my first Amy Schumer experience. Honestly, I have been avoiding her work because I think I felt hurt or threatened or angry. Her films feel representational of a troubling phenomenon in the rapid gentrification of the fat movement: the ability for smaller bodied fat people to rise in visibility while larger fat people — and the human rights of all fat people — get increasingly sidelined. There is more room than ever for conditional fat acceptance that benefits white, feminine-presenting, cisgender women who fall below a not-so-subtle weight ceiling.

And yet… I was ready to like this film. I’ve been trying to really commit to the practice of open-heartedness and empathy (yes, even when watching movies) after experiencing a crushing call-out in March that had me heave-sobbing into a plate of tacos with my unsuspecting friend Jerry Lee. I was trying to be a goddamn Buddhist, taking what works and leaving what doesn’t.

As the lights dimmed in the theater, I sat with clenched teeth and buttocks. I have seen so many awful movies about fat people. It’s so easy to get it wrong. Everything in the culture wants to position us as villains, idiots, desperate for love or food or sex.

The opening scene was highly relatable: Schumer plays Renee, a plus size woman going to SoulCycle and self-consciously navigating a world that wasn’t built for her. She is gingerly sliding between people and exercise equipment, apologizing, getting weird looks from smaller patrons and ultimately ending up breaking the seat of her stationary bike (and her crotch). She gets home and stands in front of the mirror, angrily disappointed in her Spanx-clad body.

This is a lot of women’s lives, as far as I can tell.

Then comes the crux of the narrative: she hits her head and wakes up to find that she has her dream body. She’s fashion mag beautiful — but only in her head. We see her navigate the world with her newfound confidence and get everything she’s always wanted: a supportive partner, her dream job, and a muscular and rich white dude trying to sleep with her (all the thin prizes!). She goes on to hit her head again by the end of the film, realizing that she had done all that in the fat body she’d always had.

I want to focus on three themes I kept returning to as we left the theater:

1. Renee’s head injury is a device that renders her non-agentic in her ideological transformation.

Every single thing in that movie could have happened without the concussion, and yet it serves as the device that allows Renee to remain sympathetic as a female lead to a mainstream US audience. She didn’t choose to have the experience that changed how she saw herself (the way, like, a feminist would). This mirrors the way we as a culture construct blame and consequently decide which marginalized people deserve pity and which ones deserve cruelty. Renee realizes that her body is rad — that she is rad — due to some “Act of God,” rendering her as non-agentic (a person without agency) and therefore still a good, non-threatening woman we can safely root for.

You Might Also Like: Take The Cake: To The Man In Seat 36D Who Fat-Shamed Our Flight Attendant ​

2. This movie is about the journey into fat acceptance except with all the politics taken out.

Every step of Renee’s transformation is depoliticized to neutralize it, following the typical rules of women in mainstream US films:

This story could have easily been about a feminist revelation. Her friends could have been a significant part of her change, rather than being sidelined as Renee's boyfriend took front seat as her cheerleader.

3. Fat discrimination is portrayed as something that exists in fat people’s minds.

The film seeks to posit that Renee can radically alter her life just by changing her outlook. Fat discrimination is rendered a product of the fat female imagination, therefore yet again aggrandizing a gendered individual solution (confidence) to a social problem (bigotry).

I watched I Feel Pretty after having seen a documentary called Half the Picture at this year’s San Francisco Film Festival. The film spotlights the dismal number of women directors in Hollywood. This might sound like “champagne problems,” but the truth is directors shape representation and how we see ourselves and our culture. The fact that it’s mostly hetero, cisgender white men shaping how we see ourselves and our culture is bad. They’re shaping what the film industry sees as “believable” and “relatable.” And that’s the thing about I Feel Pretty. The narrative only makes sense when you consider how limited the onscreen life of everyone but white dudes gets to be.

I have no idea how much creative authority Amy Schumer had on this project, but I wonder what this film might have looked like if we were allowed to portray women and fat people and people of color and queer people and disabled people the way we actually exist — with nuance, freedom, complexity, doubt, desirability, filled with varied and at-times conflicting drives, and the undisputed executors of important moments in our emotional and ideological lives.

*Disclosure: the PR company for the studio reached out and offered me and a friend access to an advance screening of the film.