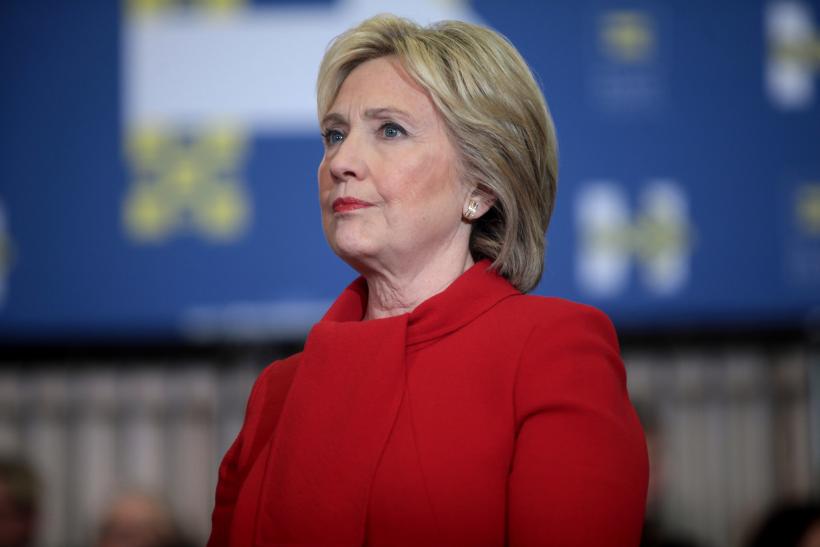 Clinton still thinks she's not really the reason she lost. Blame goes to Russia, James Comey, and misogyny in general. But is that fair? (Image Credit: Flickr/Gage Skidmore)

On-air pundits, op-ed penners, at-home politicos, average voters near and far – all were shocked by the election results of Nov. 8, 2016. Polls, expert analysis, and even a flea-sized dose of common sense predicted a Clinton win. If you were hanging out at HuffPost (née Huffington Post), odds of a Donald J. Trump triumph stood a two percent chance.

And then, the impossible happened: Trump — the blowhard, the billionaire, the bigot — won the presidency. Thus launched a thousand thousand think pieces. (Guilty.)

The heretofore hidden reasons for Clinton’s failure to Prez were suddenly bounteous.

Obviously, Russian interference played a larger role than anyone suspected.

Clearly, James Comey’s public announcement of the reopening of the F.B.I. investigation into Clinton’s email server decimated voter trust in her.

Clinton’s campaign team was way too cocky, ignoring advice even from the master maneuverer himself, Bill.

The dubious value of the electoral college system called in for questioning? You betcha.

White people totally sucking on every possible front – well, of course, there’s that.

And so on, the list of Clinton’s failures laid at the feet of all but one.

This I cannot abide, and no one should. Because to imagine that Clinton lost by no fault of her own is to be myopic, frankly sexist, and also egregiously harmful to the long-term future of our democracy.

Let’s talk about the debates. Clinton couldn’t fight back guns a-blazing concerning Trump’s misogyny because of all the accusations against Bill over the years. That’s not making Clinton responsible for her husband’s actions. It is pointing out how staying with him (which is fine, and her choice to make) weakened her position, and her ability to stand up for herself.

Look at Trump — just think about who she lost to for a moment. Does anyone imagine she could have beaten a non-misogynist, non-blatant bigot like John Kasich or Marco Rubio? Or for that matter, could she have even beaten Jeb Bush? (Well… maybe.)

Here’s what Clinton had to say at the Women for Women event in New York about herself and what went on with her campaign’s failure to beat the most disliked candidate in modern American history:

“If the election had been on Oct. 27, I would be your president.”

“Yes, I do think it [misogyny] played a role. I think other things did as well. Every day that goes by, we find out more about the unprecedented inference, including from a foreign power whose leader is not a member of my fan club.” (Clinton is talking about Vladimir Putin here.)

“It is real; it is very much a part of the landscape, politically and socially and economically.”

“If you chart my opponent and his campaign’s statements, they quite coordinated with the goals that that leader, who shall remain nameless, had.”

“Within an hour or two of the Hollywood Access tape being made public, the Russian theft of John Podesta’s emails hit WikiLeaks.”

“The reason why I believe we lost were the intervening events in the last 10 days. You can see I was leading in the early vote.”

She repeated her popular vote win, as opposed to electoral college loss.

Clinton said a coming book written by her would be her “confession and my absolution.”

In fairness, Clinton did say she didn't run a perfect campaign, and took a modicum of responsibility for her loss. But that's a long list up there of outside influencers...

And consider the tome-length compendium of reasons Trump shouldn't have won: The Access Hollywood tape, the campaign team upheaval, the lack of ground game, the daily barrage of women coming forward accusing him of harassment, a generally hostile press, a total dearth of knowledge on his part about basic things like the nuclear triad and foundational tenets of American history... You know, the list is pretty much endless.

So let’s take these proffered reasons for loss one by one:

Russian hacking of Clinton’s campaign manager: How many voters were really scouring through WikiLeaks for juicy secrets lurking in John Podesta’s email? This is John Podesta we’re talking about. John. Podesta.

James Comey announcement of reopened email investigation: How much trust was there really, though, left to decimate? And why the breach of government — and Obama-requested — email protocol in the first place, again? Remind me?

Misogyny: Okay, yes. But is over the half the country blatantly sexist? Because you don’t have to win with 100 percent of voters…

Electoral college cock block: Come on, now. That bizarre system has been with us from the very beginning. It’s not like Clinton and her team didn’t know she needed to win in swing states.

Russian coordination with Trump: While this remains unproven, let’s assume it happened. Would similar smears that were used against Clinton be as effective in ripping down Bernie Sanders, or for that matter, someone like Diane Feinstein? Or were they particularly potent against someone (ahem) who avoided reporters, made a truly bad joke about her email server, and had a decades-long history from which to pull copious examples of slippery lawyer speak?

But here’s the bigger #campaignfail. Clinton never visited Wisconsin. Not once — a swing state that she should have been fighting to win. (Ask Bill.) Not since 1972 had a presidential candidate ignored the Badger State. Why, Clinton, why?

Let’s talk about the debates. Clinton couldn’t fight back guns a-blazing concerning Trump’s misogyny because of all the accusations against Bill over the years. That’s not making Clinton responsible for her husband’s actions. It is pointing out how staying with him (which is fine, and her choice to make) weakened her position to stand up for herself.

To stand up for all women.

For me, the debates were the most disappointing aspect of Clinton’s campaign. Because there were so many openings to prove she would not pretend Trump was a “gentleman.” And she never really came out swinging.

I’d also note that she should have been ahead enough of Trump that whatever knock the Russian email hacking and Comey interference took, she’d win anyway. The woman was running against Donald Trump.

What would behoove Dems is to stop casting about for a reason Clinton lost, and look at the candidate. It’s not because she’s a woman — at least, not mainly about that.

Clinton would do well to make that choice herself. It would show maturity, the ability to learn, to grow, and to be an adult.

Lord knows, we need more of those in Washington.