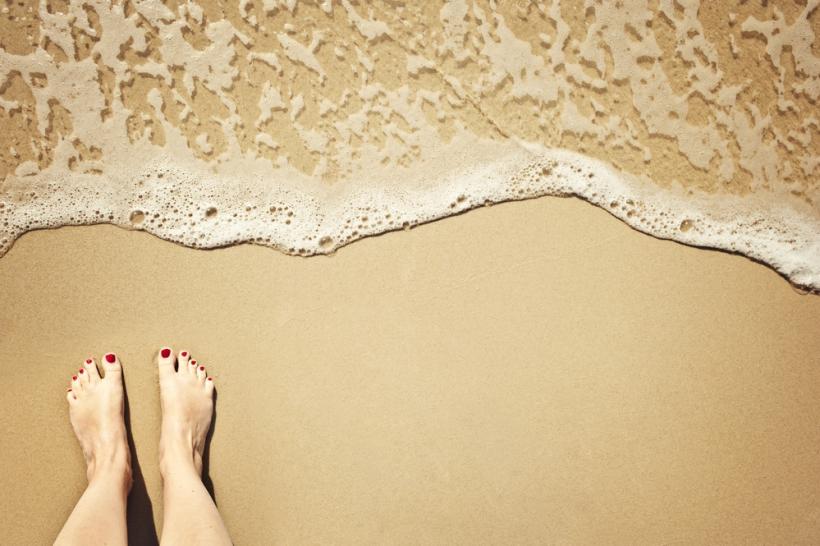 The patriarchal roots of my stomach-sucking habit weren’t lost on me.

I was six the first time I remember sucking in my stomach. I don’t recall where I learned I was supposed to do it. It could’ve been from my dad, who made derogatory remarks about overweight people. It could have been from my best friend, who used “fat” as an insult and told me not to eat while we were pretending to be princesses because “princesses don’t eat.” It could have simply been from the fact that all the girls and women I saw on TV, in movies, and in magazines were thin.

I soon learned, however, that holding in my breath was not a sustainable way to look skinnier. Eventually, I’d have to breathe out, and the secret would (literally) be out. So, I developed a new strategy: I’d squeeze my abs tightly whenever I wanted to reduce the ostensible size of my stomach. Soon, this became such a habit, I didn’t need to think about it, and I was doing it even when I was alone.

The patriarchal roots of my stomach-sucking habit weren’t lost on me. I’m well aware that this is one of many things women do to take up less space in the world, literally and figuratively.

By most definitions (or at least any reasonable definition), I’m already a thin person. But I never felt thin enough. I suffered from anorexia and bulimia from ages 15 to 18 and then again at 25. Last year, at age 27, it occurred to me that my ab-clenching was perhaps my last symptom to go. When I took a vacation to the clothing-optional resort Desire, I was more self-conscious about my stomach sticking out than I was about my breasts, butt, or genitals being completely bare. I clenched it so hard I felt like I couldn’t breathe — for what purpose, I can’t say.

It wasn’t like I was looking to attract a mate; my boyfriend was right there. And it wasn’t like I wouldn’t be accepted there with a convex stomach. People of all sizes and body types were present. The thing is, once you’ve internalized the male gaze enough, nobody even needs to be watching for you to care how you look.

I was working to please my own eyes.

The patriarchal roots of my stomach-sucking habit weren’t lost on me. I’m well aware that this is one of many things women do to take up less space in the world, literally and figuratively. Naomi Wolf argued in The Beauty Myth that making women obsess over their looks is a way to keep them from thriving and effecting change in the world. And then there’s the metaphor of making ourselves smaller. There’s a reason that guys are the ones who are always taking up two or three train seats and bench spots by spreading their legs, AKA manspreading.

Curious if my stomach-sucking was indeed a gendered thing, I asked my partner if he ever did it.

“Why would I do that? That’s stupid,” he replied.

Granted, this is a sample size of two, but I think it’s a dynamic other heterosexual couples can relate to.

So, this year, when we returned to Desire, I decided I would not suck in my stomach. At all. Not even a little bit. I would let it all hang out, and I wouldn’t give a damn.

This was easier said than done, mainly because I didn’t quite understand what the alternative was. I actually couldn’t remember how I held my stomach before I started sucking it in. So, the best I could do was push it out as much as possible. It looked like I had a bowling ball in my stomach. I felt disgusting, weighed down, lazy, greedy, indulgent … all the stereotypes I’d learned to associate with fat people.

My stomach, clearly, was not just a stomach. It was a symbol of all the qualities my society had taught me to look down upon.

“My stomach looks huge,” I told my boyfriend at the beach. “I look pregnant,” I complained.

Then, I thought: “OK, so I look pregnant.” There was something liberating about just letting that be. Even if I was pushing my stomach out deliberately, I was allowed to exist with a stomach like this. If I couldn’t convince myself that my sticking-out stomach looked sexy, maybe I could do something even more freeing: give myself permission not to look sexy.

The next day, there was a belly-dancing class out by the pool, where women put jingling belts around their hips. I jumped in and shook my butt, intentionally expanding my stomach as I wiggled it back and forth, smiling at my boyfriend, who was in the pool. I half wondered if everyone was thinking about what a big stomach I had. Instead, a guy  complimented me afterward, telling me I did a good job dancing.

As I disproved time and time again that anyone was judging or even noticing my stomach, I stopped feeling so self-conscious about it. On my last day, I told another woman about my efforts to stop sucking it in.

“I don’t even know how I’m supposed to hold it." I stood up and showed her what I normally did.

Curious if it was, when I got home, I asked the physical therapist I’d been seeing for unrelated issues how you’re supposed to hold your stomach. She said that while sucking it in like I first did as a kid can squish in your internal organs, clenching your abs is actually OK to an extent. But when I showed her how I did it, she said I was contracting my muscles in a way that made me slouch.

My attempts to reduce my apparent size really had affected how much power and confidence I projected.

The woman at Desire was right, though, that pushing your belly out completely wasn’t necessary either. My physical therapist said that gently engaging your ab muscles is actually good for your back. I practiced doing this in a way that allowed me to stand up straight instead of folding me over. I felt bigger as I walked down the street, literally and figuratively.

Now I know that I need neither clench my stomach tightly nor puff it out. Still, I think I’ll go for the puffy look every now and then, just to prove to myself that I’m lovable and fabulous no matter how much my stomach sticks out.

If you like this article, please share it! Your clicks keep us alive!
Tags
body image
stomach
belly
fatphobia