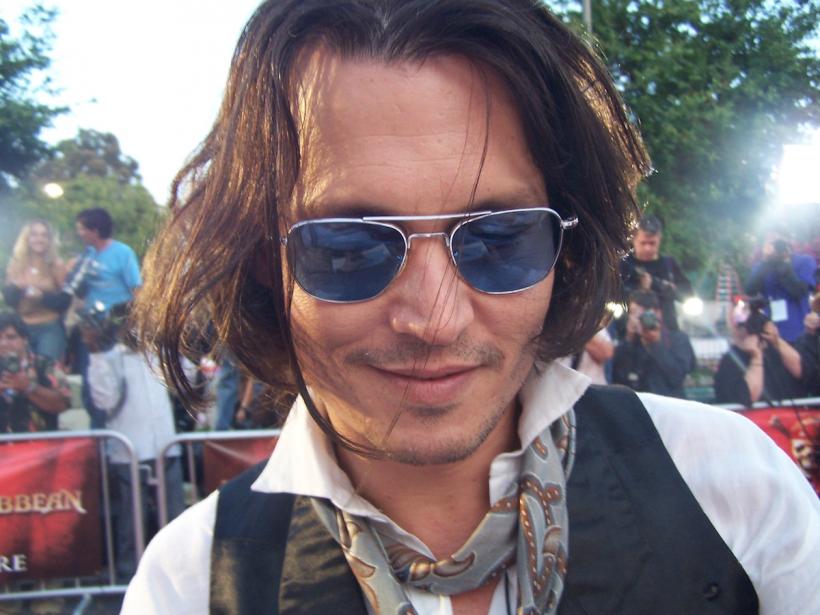 It is an age-old question: Where do you separate art from artist? And should you?

The Christmas I was thirteen, my brother bought me a life-size cardboard cutout of Jack Sparrow. I was overjoyed.

I even wrote a song about it (set to the tune of “I Want a Hippopotamus for Christmas,” except instead of a hippo it was a pirate captain). Back then, Johnny Depp was more than an actor to me: he was as dear as any person I'd ever grown up with — in fact, you could say I did grow up with him.

My obsession had reached its peak the year before that Christmas, the first without my great grandmother; Johnny Depp had been a source of joy to me in the months prior, when she was sick, and my mother hadn’t slept at home in weeks, curled instead into the fetal position in the armchair beside Mamaw’s hospital bed. I wore t-shirts with Edward Scissorhands’ face on it to the hospital — I put beads in my hair like Jack to show everyone.

I was home alone watching Pirates of the Caribbean — my parents with the other adults at the hospital — the night she died. Those lonely days, Jack Sparrow was one of my best friends.

By the time I received that cardboard cutout, I’d read three separate biographies on his life, hung seven different Pirates of the Caribbean and Edward Scissorhands posters up in my room, and seen almost all his 40+ (at the time) movies, even the ones I shouldn’t have been watching at such a young age (here’s looking at you, The Ninth Gate).

I celebrated his birthday on June 9 every year — my best friend Stephanie and I would have a “Johnny marathon” and binge Charlie and the Chocolate Factory, Benny and Joon, Crybaby, and more. Year after year, we watched. Roux from Chocolat was responsible for my sexual awakening. James Barrie in Finding Neverland is largely part of why I’m a writer today. In my ninth grade school photo I am sporting my housekey dangling from a paperclip in my ear because that’s what they wore in 21 Jump Street.

It’s useful to remember here that the word fan originated from fanatic.

This June 9, I didn’t celebrate. I knew what day it was; years of Facebook memories reminded me, but I let it pass without comment, like one might an anniversary with an ex you never want to speak about.

The cutout still stands in the corner of my childhood bedroom today, nestled between my mom’s pile of spare quilts and my collection of figurine Dalmatians. When I visit home now and see it there, I don’t feel that swell in my chest of meeting with an old friend, like I used to; these last twelve months, I’ve stared only at the carpet around it, too ashamed to meet its eye.

This sudden embarrassment on my part spawns from the very public turbulence Depp has been facing in his personal life these last few years; most infamously, in June 2016 he was faced with charges of domestic abuse against then-wife Amber Heard — and even though the couple settled their divorce and Heard dropped the charges last summer, the abuse allegations, this time from Depp’s former business managers, are still rolling in as recently as June 24, 2017.

This comes mere days after Depp’s comment about Donald Trump on June 22: “When was the last time an actor assassinated the president?”

And while Depp is not the first celebrity to make a joke about violence against Donald Trump and receive backlash, and though I am certainly no fan of Trump’s, in context with everything else being revealed about Depp’s personal life, it is enough to break my heart.

He grows increasingly more detestable: he’s going bankrupt, and facing a lawsuit. He broke the law smuggling his dogs into Australia in 2015 (he claimed it was an accident, but as recently as June 27, his ex-managers are suggesting Depp did it knowingly and then lied about it).

It seems every time he is the news, it is more disaster.

"I was ecstatic about realizing he breathed, then I breathed, and it was the same air."

I remember the day I learned about Heard filing the police report. It was May 25, 2016 — one day after I had traveled the 9+ hours from Cincinnati, Ohio to Verona, New York with a friend of mine to see the Hollywood Vampires show, a supergroup comprised of Alice Cooper, Joe Perry, and Johnny Depp.

I had waited over an hour on the phone to get the tickets in February, and then I shouted to the entire office, "This is the greatest day of my life!" Two seconds later I amended that claim: "Until May 24 when I actually get to see Johnny Depp. Then that will be the greatest day."

Attending that concert and seeing him in person was the fulfillment of a decade-long fantasy. I was ecstatic about realizing he breathed, then I breathed, and it was the same air.

Even then, Depp’s popularity had abated, and his movies were underperforming, but that was nothing to a true fan like me. The quirky 2015 film Mortdecai was a box office bomb and largely disliked by the critics, but I loved it; it was released the day after my birthday — Johnny’s present to me, I called it. And 2016’s Through the Looking Glass was undeniably terrible, but so what? I was still there opening weekend.

People called him a has-been, washed-up, a sellout, but not me. "I’ll stand by him until the end," I said. Forever. He had meant to so much to me growing up; I thought nothing could change that.

This is just a reminder that dreams come true, I wrote as the caption to the concert photos I uploaded to Facebook on the car ride home, which included a selfie of me with Johnny Depp on stage in the background. That was the same car ride I started to receive the texts linking me to Heard’s allegations, friends saying, "OMG did you see this??"

My relationship to him was such that, for most of my friends and family, to think of Depp is to think immediately of me — my parents and most of my aunts and uncles even refer to him as “Johnny,” as if he were a personal friend. Calling him “Depp” now feels wrong, too stiff and formal for what he is to me. Was to me.

"It is an age-old question: Where do you separate art from artist? And should you?"

So when I say that the last year of Depp’s life has been devastating for me, you will know I am not exaggerating. My feelings have been in constant flux through all this: I have been embarrassed, hopeful, shocked, worried, outraged — but most importantly, I am grieving.

Losing faith in him has been like losing a part of myself.

"Is it true?" my friends asked me, like I would know. The Johnny expert. Certainly I knew what I wanted to think. I read all the comments online in his defense, from his daughter’s post on Instagram to the character testimonies from his other exes, including one from his long-time partner and the mother of his children.

But I also knew how I would be reacting if the charges were against anyone other than Depp. My bias was getting in the way of condemning him. And the truth is, it isn’t about debating his guilt or not: I always believe the victim. I must.

But how could I reconcile my conviction to trust the victim with my former love of Depp?? I can compartmentalize, I wanted to say. I can separate the professional actor from the personal life of the man. I’m not the first person to try that (any Woody Allen fans in the house?), but the truth is, these accusations are not excusable, regardless of talent. It is an age-old question: Where do you separate art from artist? And should you? For me, the answer doesn’t matter. He was always more than an actor to me—I had felt I’d known the man, and it was the man that had let me down.

These days if the subject comes up, I swirl my drink with my straw, stare at my shoes, whisper like a confession, "Yes, I liked Johnny, but—" the way I imagine some conservatives have taken to saying, "I’m a Republican, but—" It’s hard to finish that sentence without having it sound like a defense. Or an excuse.

It’s hard to denounce him without feeling like I am also saying goodbye to Ichabod Crane, Victor Van Dort, Roux; to Jack Sparrow, a source of genuine joy and comfort; to Edward Scissorhands, my quiet and gentle friend, a movie watched a thousand times. My more than decade-long friendship with my best friend began with Johnny Depp. The first stories I wrote came from my love of him.

One of the best birthdays of my life was the weekend trip when my mom took me and my grandma to Depp’s hometown in Owensboro, Kentucky, and she pulled over in front of the house we thought he was born in (thanks, library databases and internet fans), and there were lights on in the living room, some other family unrelated to Depp having dinner, and she said, "Let’s knock, let’s ask them, say Excuse me, do you know that Johnny Depp was born here?"

She flung open the van door but left the engine running, handed me a spoon and a cup and said, "Go, go, get some dirt from Johnny’s house, we’ll take it home," and it was snowing and I was horrified and I was laughing and even though I have these memories, I know what I must do now, as an adult. To fully put my actions where my convictions are, it will require a complete condemnation, that I shed my obsession like snakeskin, and I will do it, but I must forgive myself if it hurts.