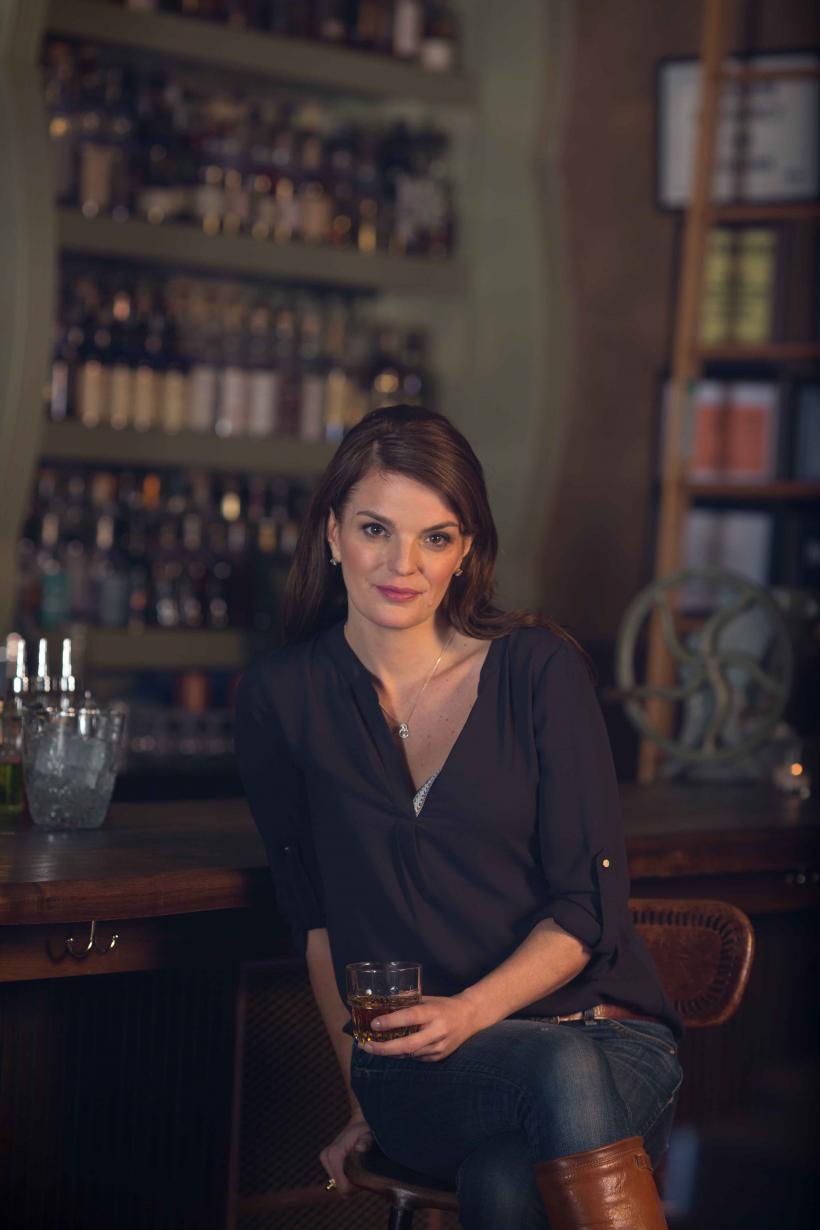 Raise your hand (or is that flask?) if you're a whiskey-loving lass. There's a good chance you are—thanks in part to whiskey sommelier Heather Greene, one of the first female experts in the whiskey field, there are more women swilling bourbon and rye than ever before.

Though long considered a "masculine" drink, Greene turned the whiskey industry on its head when she entered the game 10 years ago. Since then, she's achieved a lot of firsts: first American woman to serve on the Scotch Malt Whisky Society Tasting Panel in Scotland; first woman to win Whisky Magazine's American Young Ambassador of the Year award; and first female whiskey sommelier at the Flatiron Room in Manhattan. While serving as a brand ambassador for the whiskey brand Glenfiddich, she also created a women and whiskey program dubbed The Mrs. Roberts Society, which involved her hosting a number of events for women to enjoy and learn about whiskey.

The author of Whiskey Distilled: The Populist Guide to the Water of Life , which was released last fall, Greene continues to spread the gospel of whiskey through a number of public and private events, as well as through her monthly column for Eater (she'll also be releasing a second book sometime-ish).

Greene took time out of her busy schedule to talk about her recent thoughts on women and whiskey, why women are better "nosers," and her reasons for being Roxane Gay's biggest fan. (Looks like Roxane has a new drinking buddy—if she's a whiskey fan herself, that is.)

I'm going to ask you a question that you get a lot: How did you get into whiskey?

I lived in Scotland for a couple of years. And when I was in Scotland, I sort of did what the Romans do: I drank whiskey. I worked at the Scotch Malt Whisky Society in Edinburgh, and this was back when no one gave a shit about whiskey. Probably five years ago, people started paying attention. And I've just been at the apex of the whole thing.

What is it about whiskey that you love?

There are so many flavors and aromas, and there's beauty and craftsmanship in how you make it. There are all these things that add up to this compelling and interesting world.

But you were initially in Scotland for your music career, right?

Essentially, I was in Scotland as a musician, and I had been living in New York, and then my life sort of came to the point where there wasn't much to do in Scotland. And I found the same kind of sensuality and passion and interesting characters in the whiskey world as I did in music. There's a lot of synergy between the two. I feel at the center of it all that they're both created with heart and discipline and science and something a bit ethereal.

What's strange is that everything that I ever wanted in a music career, I got from whiskey. Like touring and writing and books and being creative. I'm just an artistic creature, I think. I approach the world in a heartfelt and vulnerable way and I think both music and whiskey fit it.

Speaking of that world, you've achieved a lot of firsts for women in the world of whiskey. Why do you think there hasn't been that many women involved with whiskey?

Well, actually, it's changing quite a bit. Women have been involved with making whiskey for a long time. And women have been drinking whiskey for a long time. But it's now moved to the masses. Thirty-seven percent of women are now consuming whiskey, and that's according to one of the big whiskey-makers. So there are a lot of us now. And that's great. Although I will say that when I started out 10 years ago, I felt really alone. 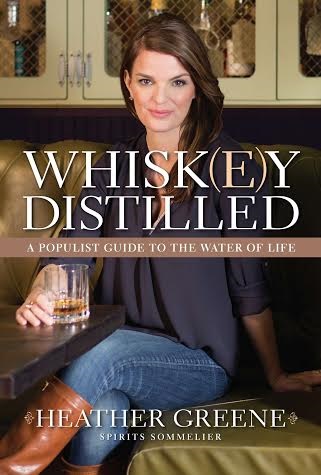 You caught me at an interesting time. A lot of women in the whiskey industry are tired of this "women and whiskey" question. It's been going around for three years now. The women that I work with want to stop talking about women and whiskey and get on with their lives.

But [whiskey] is so new to some women, and I have to remember that. I think the trick is to remember that there isn't one kind of woman. Many of us in the United States come from different backgrounds, and how we approach whiskey as women is going to depend on who we are and where we come from.

And the conversation, for me—and I'm in the middle of writing a big article about this—is that the people who are writing about women and whiskey are missing the point. There isn't one kind of woman. There are a lot of women, there are a lot of palates, there are women who've been drinking it for a long time, and there are women who haven't. Some women from different multicultural backgrounds will approach drinking differently. I come from a Scotch-Irish background, so it's like, "So what? Who cares?"

Right? But just when I got sick of this topic, I started getting emails from women who thanked me for writing about whiskey, because now they're more comfortable about drinking it. And I'm like, "Okay, maybe there's still more work to be done." The idea of women drinking whiskey doesn't exist in a vacuum. We exist in a wider culture that's dealing with gender issues on all fronts. The issue of women and whiskey is just a reflection of society as a whole. I hope that wasn't too long of an answer! I just thought I should get it all out.

You know, I saw that your website interviewed Roxane Gay and I love her. I was just finishing the introduction to my book while I was finishing her book, Bad Feminist. And she writes a bit about people judging a book based on its cover and how you have to write despite that, and I thought I was sort of prepared for what came because of what she wrote. No matter what, if you're a woman and you write a book, you're always a female author, and not just an author. And that was a hard pill to swallow when my book came out. A guy is on the cover of his book, and there's no fuss about it. But there's a lot of space given to the fact that I appear on the cover of mine. It's something; it's not nothing. I have a double whammy. I'm a woman in whiskey and I'm a female author, so I wasn't sure how that was going to come across. I didn't want the book to be for women. It's a book about whiskey.

Yes, but I think, in general, whiskey has been viewed more as a "masculine" beverage.

Yes, and that's interesting. I guess some people do feel that way. But you know that's really something more cultural. Where I came from and in the house where I grew up, whiskey didn't have a gender. I think it depends what you grew up with, and your family, and the part of the country where you grew up. My grandmother, my great-aunts, they all drank whiskey. My really good friend Gina comes from Alabama and they always drank Jack Daniels in high school. But maybe you're from California where it's more wine-oriented and whiskey is more of an outlier there, so it just depends. Now, a lot of media perceives it as masculine. A lot of the advertising for whiskey has been put out that way, for sure.

Is it true that women have a better nose for whiskey?

Women have a better nose, period. And the reason for this is because this is a way for women to select their mates. There are studies that show women do nose better. On an unconscious level, we're selecting mates based on compatibility with our genes. However, nosing is something that people can develop. So men don't have to lose hope. They can practice and practice and eventually become as good as women. But women are just natural nosers.

Why did you decide to write a book?

At the time, years ago when I first started out, I didn't have a lot of job opportunities offered to me. I did have one fantastic job as the brand ambassador to Glenfiddich. I did it for five years, and it was time to do something else. No other brands were knocking at my door. I thought, "Well, what am I going to do now?" I thought this was a good way to have my own voice.

What would you recommend to a whiskey newbie?

Shameless promotion for my book—you can use that as a guide! I advise where you can buy whiskey on the super cheap, how you can organize tastings for your friends, and what brands I recommend. I help people explore whiskey and get in touch with their palates. One of the best ways I recommend for getting started is that you and your friend go to a bar, and start easy. One of you gets a scotch, one of you gets a bourbon, and you try one another's and see which one you like better. That's it.

That sounds like fun. When I was very young, I drank a whole little bottle of whiskey (we call it a "mickey" in Canada) straight, and I became extremely sick. I haven't really touched it since.

A lot of people's first experience with whiskey is nasty like that. Getting wasted in high school. Taking a sip from your grandfather's glass. Taking a shot at a wedding. I think in this country, we have a real problem with how we approach alcohol. It's taboo until you're 21, without teaching a responsible way of drinking. Pounding shots and drinking it behind closed doors is just a terrible way of getting into something that should be savored and respected and enjoyed. I wish there was a way we could change that.

I don't promote underage drinking by any means, but I do think we should have a healthier attitude about how we drink in this country. You know, shots, for example. Shots are just a way to get it done quickly and get inebriated. It's not about tasting anything. I don't do shots. I'm a sipper.

If you like this article, please share it! Your clicks keep us alive!
Tags
heather greene
profile
Interview
whiskey
Guide
advice
tips