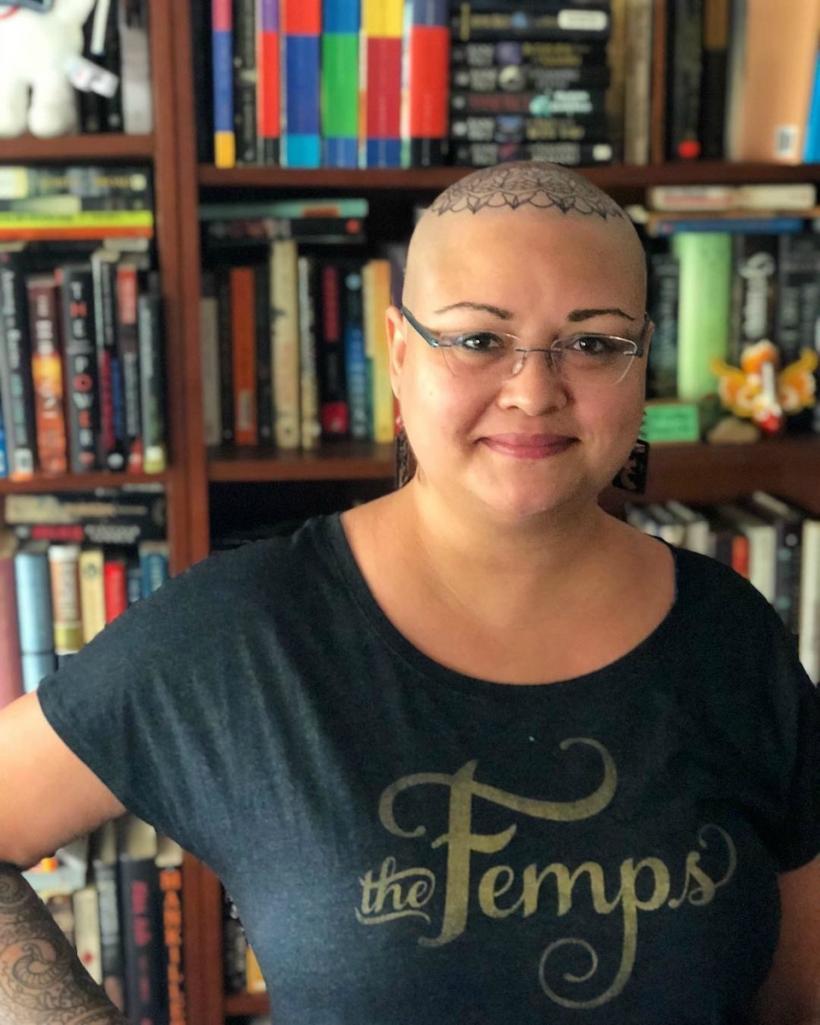 In the aftermath of the Sandy Hook massacre in Newtown, Connecticut I suffered from such profound secondary trauma that I didn’t get my period for more than two months. Being a gun crime survivor myself, as well as having worked with children the same age as the Sandy Hook victims, the event was a combustive force that affected my mental and physical health for months after.

When my period finally came it was so extreme and painful my friends likened it to a prolonged miscarriage, even though I’ve never been pregnant and am childfree by choice. For days I was crumpled into the fetal position, weeping, and thinking about all the Sandy Hook moms who would never see their kids again, and all the others who would spend so much of their lives now in fear.

I watched the marches from home over social media, my belly clenched, terrified that a shooter would open fire on the crowds. I had quiet panic attacks seeing the pro-gun ammosexuals open carrying their weapons and taunting those who were literally marching for our lives.

Fast forward six years; the Valentine’s Day Parkland massacre happened just thirteen miles from my home. The shock and horror that rippled through our community after this event was reminiscent of the pre- and post-Hurricane Irma devastation. There was a palpable hysteria in the air that made simple acts like going to the store or movies feel scary and unpredictable. And unlike other school shootings, the survivors of Parkland were suddenly catapulted into the global media spotlight as the newest and youngest advocates for gun control — a role that troubles me given how much acute trauma they are already processing after watching their classmates gunned down so mercilessly.

And once again my uterus wrenched in pain along with all these new trauma club members, one of whom who looks and sounds spookily like me when I was her age. Since Parkland I’ve been experiencing my first bout of vulvodynia in more than 12 years — a mysterious and painful gynecological condition related to trauma and stress that causes enormous discomfort and has no medical cure other than relieving stressors. I might not have children, but I still feel their pain and distress deep in my belly.

My aching insides twisted up even further as I watched the Parkland students mobilize the world into the #MarchForOurLives protests for sensible gun control measures in America.

Instead of feeling empowered by the marches, I felt a conflicted mess of grief and anger, frustration and fear.

I felt grief that I had never been able to leverage my own experience of gun violence to affect greater change for social justice and instead have an internal battle managing the post-traumatic stress disorder that has become my shadow. I was angry that a majority white school in an affluent area gets shot up and suddenly the survivors are now the faces of the anti-gun-violence movement. Meanwhile, the Ferguson protests, also led by students about the same issue, were framed as riots lead by thugs, dismissed as such by the media. And I felt frustration that these newly traumatized Parkland children are suddenly framed by the media and other institutions like the ones now responsible for fixing America’s grotesque fixation with guns.

I watched the marches from home over social media, my belly clenched, terrified that a shooter would open fire on the crowds. I had quiet panic attacks seeing the pro-gun ammosexuals open carrying their weapons and taunting those who were literally marching for our lives.

The marches ended and yet the photos kept rolling in. As I found myself increasingly agitated by the barrage of images featuring so many smiling faces holding up clever signs hoping to go viral, it took me a while to figure out what exactly had been bothering me.

After surviving the random act of gun violence that took the life of my dear friend Wendy in our senior year of college, I was beyond shattered. I didn’t sleep for months, and when I did, I would awaken screaming. My hypervigilance made it difficult, if not impossible, to be around people and in particular large groups of people. The trauma affected every aspect of my life for the years it took to testify against Wendy’s murderers. I only managed to graduate because my professors created optimal conditions for me to do so at my discretion and comfort. And the years after graduation found me struggling to maintain a job, my mental and physical health, and everyday life until a suicide attempt forced me back home with my family.

Everyone reacts to trauma and violence differently.

In my case, it turned out that previous untreated violent traumas I’d survived — years of physical, sexual, and emotional abuse — came to the surface with witnessing Wendy’s murder, hence my almost complete mental and physical breakdown. Up until then, I had no idea how close to a dark precipice I was until I fell right into it and continued falling for years and years.

Seeing how highly functional these Parkland survivors have been —getting up on stage and speaking to the world, some recovering from being shot by bullets created to maximize damage — and mobilizing for national change so eloquently left me not with feelings of empowerment or hope for change, but rather feelings of abject failure.

I was overwhelmed with the realization that I’ve spent the last 18 years healing and have accomplished not even a fraction of what these kids have done in just over a month.

I also found my anger turning into a slow-burning rage as I watched all the smiling faces and their smugly clever signs, oblivious to their privilege of being able to exist in a crowded public space and feel comfortable enough to laugh and have a good time in a context that many other survivors wouldn’t be able to stomach. For some of us, the effects of gun violence were devastating and continue to be. So, why did the march look like such a party when its primary motivator was to stop the deaths of children by guns in schools?

As my uterus does her post-trauma contortions and vulvodynia shows no signs of abating, I’m feeling as hopeless as after Sandy Hook from the inside out. If the murder of babies (which conservatives sure care a lot about in their spin on abortion) by gun violence wasn’t enough to make an effective change to these NRA stooges then why would they care now? And if it takes the mass killing of predominantly white students to provoke a renewed national movement for gun control, then where does that leave all us survivors of color who have been asking for this change for far longer? Where are the marches for Stephon Clark, Alton Sterling, and all the other unarmed Black men killed by police with impunity?

Too many voices are being left out of this conversation. And from where I’m standing as a gun crime survivor, a march isn’t even close to a concrete solution toward ending gun violence in America.

If you like this article, please share it! Your clicks keep us alive!
Tags
guns
Kids
gun violence
gun crime survivor
crime survivor

How #MarchForOurLives Leaves Out Gun Violence Survivors Like Me
Sezin Koehler