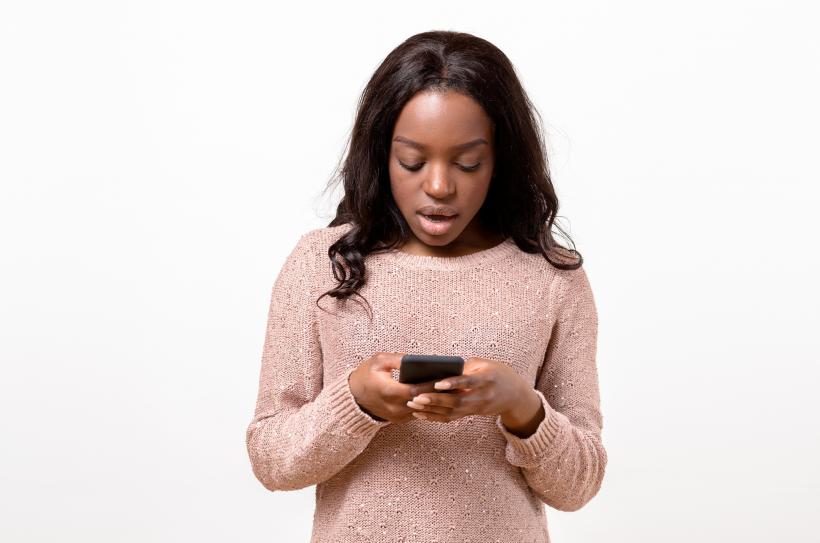 We texted day and night over weeks about novels, poems, single parenting, farming, teaching, and writing — proof positive of an extending courtship,

Recently, Kristen Roupenian’s “Cat Person,” a story about a faux-intimate, emoji-dependent, sad-in-the-sack relationship, went viral and millions of readers took to social media defending its genius or damning its drivel. While "Cat Person" speaks to our depressing State of Toxic Disunion and the difficulties negotiating sex, power, and consent via texts, sexts, and SociopathMatch.Com, it actually leaves us mired in misogyny’s muck. At the end of the story, Margot is rendered a passive pussy as Robert, her erstwhile Prince Charmless, gets the last text: “Whore.”

It is now a truth universally acknowledged if you are a single woman in possession of a good cellphone and in want of a man, the odds are that you will, at some point, find yourself ensnared in a texting-sexting-dating cock-up, as I have, admittedly more than once.

This is how I flipped the script from passive pussy to power pussy.

I was waiting outside airport baggage claim in the cold when Farmer Dick (real profession, fake name) pulled up in his dirty white delivery van, Heart and Soil Farm emblazoned on the side.

“Where do I pick you up?” he’d asked the night before.

It was years since he’d been to an airport, and his question suggested naïve bewilderment over how electricity, roads, and airplanes connected the great expanses between farms and cities — or how the internet highway connected singles, not-so-singles, polys, pans, earnest hopefuls, and predatory sociopaths.

He apologized for the rustic transport.

“Only kale and lettuce and cabbage go in the back,” he said. “No kidnap victims.”

“My friend has your cell, address, and the Airbnb link,” I said.

Airbnb first night — “Urban Duck Farm” — and if all went well, the rest of the weekend at his house.

Perhaps you think this weekend was an ill-advised, ready-made disaster from the start. However, by the time I bought the tickets, Farmer Dick and I had spent dozens of hours in conversation, more than people spend for casual hookups, more than some before marriage. Enough hours that such a risk’s payoff might have been love.

Weeks of tremblings started with his profile pics: Gentleman Farmer in a rumpled blazer and jaunty beret with a scruffy beard; a hand held between nose and mouth, cupping soil. Ahhh, terroir! Another pic: Shirtless, riverside, a black dog curled up under his arm, like Coleridge’s “enamored rustic” lazing on the banks of the Thames.

Oh yes, I’d go with him to Xanadu’s pleasure dome.

We texted day and night over weeks about novels, poems, single parenting, farming, teaching, and writing — proof positive of an extending courtship,

Him: I feel you these miles apart.

Me: Energy travels fast and furious through the universe.

Skype proved he was not a Nigerian Prince Bot in need of my bank account. And bonus! At his suggestion (be still my writer’s heart), old-fashioned letters arrived in my mailbox in his homemade envelopes. In his first letter, Farmer Dick wrote, “In a sane and just world, you could fly to me in a few weeks — we could briefly winnow out all our insecurities, crash at an Airbnb — come back to my place, walk those quiet wooded places, make meals, make love, make words for our mealmaking and lovesharing.”

Even with a failed marriage and enough online dating disaster stories for 1001 nights, I felt soft and tingly, ignoring red flags. For instance: a message that ended, “I love you. Fuck me.” Fucked for loving me? Who claims love before meeting? Two nights before our rendezvous, he sent me a message: "Long business dinner. Feeling checked out. Please feel secure in any silence from me. Much love! ;) heart heart heart."

“I love making love with you,” Farmer Dick said later that night after we’d been having sex on and off for hours, and, as if marveling at his own piece de resistance, said, “I came three times! That hasn’t happened in years!”

Farmer Dick’s last message, sent days after our rendezvous: “How are you? It’d be pretty raw if we couldn’t have a conversation about how you felt — feel. I would appreciate the autopsy of the weekend from your p.o.v.”

Friday: Damn good, though Urban Duck Farm’s location, in a neighborhood of burned-out homes, made me wonder if he chose a hipster hostel for the bottom line?

Saturday: Farmer Dick earns his pseudonym. Not one casual touch or intimate kindness. At a coffee shop (so he could use the free WiFi), he read Slavoj Žižek quotes from Goodreads: “Love feels like a great misfortune, a monstrous parasite, a permanent state of emergency that ruins all small pleasures.” Žižek is generally regarded as a racist, misogynist, pseudo-intellectual, but I pretended to listen because, please please please don’t let Farmer Dick be just another asshole because assholes don’t write long letters and send them in homemade envelopes, do they?

He chattered about green burials on his farm ("I could sell plots for ten thousand!”) which drifted to talk about the dark web and ethical cannibalism: human bodies as haute cuisine. I blinked and sipped the coffee that I paid for.

Back at his house, as we inspected the walls and traced out the color blocks for the faux Rothkos, he pointed to knee-high, red specks along the walls. “Blood,” he said. “My dog had fleas. She got a sore behind her ear from scratching, and every time she shook her head…” He no longer had the dog.

I started painting a green square on the wall. He disappeared upstairs. When he returned, he said, “I took MDMA, and when I do, I’m not usually down for sex.”

However, he was down for a two hour, egomaniacal, run-on sentence regarding all the women he’d ever fucked and all the women who loved him. He went on and on about how two nights before — the night he sent me the text about feeling “checked out” — his ex-girlfriend stopped by. While they didn’t “fuck-fuck," he said, "we sort of fucked, but I didn’t want to tell you because then you might not have come, but you say that you believe in truth and transparency, so I’m telling you now, and speaking of now…that the excitement of meeting is over, you're cool if we don't really text as much?"

I sat next to him on the couch, focusing first on his pupils — wide, dark saucers — and then on the drippy color blotches.

Fucker, I thought. You motherfucker. You won’t touch my insides anymore.

He jumped up and attacked the walls like a toddler with finger paints. I group texted girlfriends:

GF’s: Humor him. Take notes for an essay.

Me: He’s claiming his Rothkos are more authentic than Rothkos.

Me: He wants to tuck me in and read Žižek. I wonder if he knows how full of shit he is.

Sunday: That morning in bed, his hand found mine, fingers stroking my arm, then belly, then thigh. Feigned tenderness or a more likely last chance grab? Will you think me a fool or worse, think me a whore à la Cat Person, if I say that despite his epically awful behavior, I got wet and throbby, climbed on top of him, and with efficiency, achieved clinical solo success.

In short: I fucked him.

Don’t imagine I felt any pity as his twitching erect penis sagged in disappointment against his thigh.

“Sorry,” I said, flashing a bland smile, “have to get going. Got a text. New flight time. Hours earlier.”

While Farmer Dick was warming up the van and shucking ice from the windshield for our airport drive, I found my stack of letters to him on the dining room windowsill and crammed them in my bag.

Those letters, delivered to the wrong address, were meant for a different man.

I was five hours early for my flight, but as I cleared security, another flight to my destination was announced: final boarding. I ran to the gate.

“Please,” I said to the agent, “I’ve had the worst date weekend ever. I just want to get home.” Did he see my wobbly, sad shame through the steel door?

Safe and sound. Perhaps you think this weekend was an ill-advised, ready-made disaster from the start. However, by the time I bought the tickets, Farmer Dick and I had spent dozens of hours in conversation, more than people spend for casual hookups, more than some before marriage. Enough hours that such a risk’s payoff might have been love. Maybe when I arrived, no longer just abstract words but full-bodied, I wasn't what he expected or wanted. Fine. No harm, no foul. U-turn on the next flight.

But he didn’t get the last word or last text: “You ask ‘Are you okay?’ Something you failed to ask me all weekend. But, in answer, I am perfectly fine. Minimal wounds. Healing fast.”

If you like this article, please share it! Your clicks keep us alive!
Tags
online courtship
online dating
dating
online
relationship
unhealthy relationships

MORE FROM Simone B.

My Fantasy Online Courtship Went From Charming To Creepy Once We Met
Simone B.