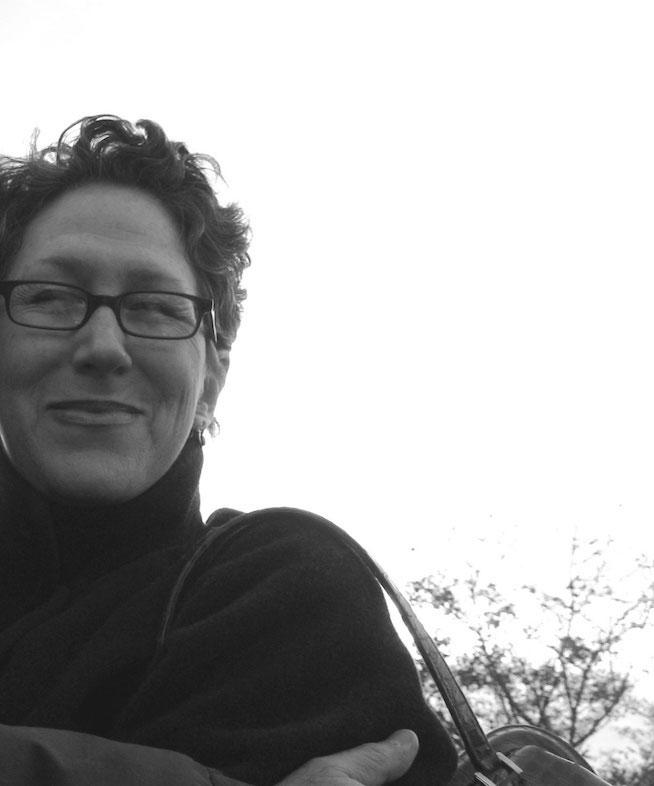 Everybody wants to have a personal cheerleader, a person who is in their corner. For innumerable women, that person is Amy Ferris.

Known on the Internet for her Marrying George Clooney blog (and book by the same name), Ferris is constantly engaged with a slew of followers and friends on her Facebook page. They religiously check in to see her daily thoughts on life, love, politics, and more. Her posts invariably begin:

this is what i know today
post coffee
pre wine

And then the narrative streams out. Reflections on her mother, world affairs, Donald Trump, the word fuck, SHEroes, and her beloved spouse, iKEN. The tone is conversational. Ferris has a distinctive jargon all her own —​ Amyese. This includes sentences made up of individual words punctuated by periods, references to the healing power of unconditional love, and plenty of “balls-out” truths.

The desire to peel away the façade of cheerful wellness that so many people present while they suffer mightily brought Ferris to conceive and edit Shades of Blue: Writers on Depression, Suicide, and Feeling Blue. This anthology is a gritty book by 34 essayists about their struggles with emotional pain and mental health challenges.

You wrote in your introduction to Shades of Blue that the suicide of Robin Williams was a pivotal moment, when you realized that there were stories about depression that needed to be told. The book covers a full continuum of topics. How did you choose the essayists?

I went out to writers, authors — activists, journalists, artists, actors — folks I knew who had experienced or suffered through depression. After Robin Williams died, so many people “came out” of the closet about their own depression. Their own attempted suicides. Their families, their partners, their children. I think Robin Williams’ death inspired and encouraged many, many people to open up about their pain and sorrow.

I reached out to those I knew, and I wanted there to be a collection as diverse as the subject. Everything from postpartum blues, to suicide, to assisted suicide — with each essay as different as the contributor writing it.

This book has been a mission for you to “Help save lives and make a difference.” Do you think America is especially inadequate in dealing with mental health issues?

I don't think America is inadequate, I think humans are inadequate.

Humans have been very secretive about depression, their own depression. Depression is not sexy. It doesn't fit in with the, “Hey, everything's okay, everything's good” syndrome. It's an awful, difficult, and very hard disease to navigate. It's an emotional disease, and it's easy to not see what's going on inside of a person.

Most folks view depression — or their idea of depression — as a homeless person, a disheveled person, someone suffering from PTSD, or an unbalanced person. Depression doesn't discriminate. It's a beautiful woman; it's a pregnant woman; or a brilliant, creative soul; or in the funny, fabulous mind of an actor; or the genius explorer, inventor.

It is my mission to save lives, and make a difference because I myself suffer from sadness and the blues. Deep blues. I suffer many days in silence.

Folks still don't know how to deal with people who are depressed. It's gotten much better — much better — because of the outpouring of stories; the sharing of family history, the pieces being written about it, the television shows/specials and films about it.

But there's still the misconception that it's something we can sweep under the carpet, or just snap out of. I think a huge problem — a massive problem — has been that people can't get the right kind of help. Let me rephrase that. People are often afraid of admitting they have a problem because it's seen as shameful. So maybe, they still aren't necessarily going to be talking openly about it.

But, thankfully… slowly but surely, more and more people are sharing their stories, coming out of the darkness — if only for a few moments and saying, here, this… This is what depression looks like. It looks just like you. And I think the more people do that, the more help there is; and then more and more, others are less afraid to share their own story.

You often reference emotional scars as “beauty marks.” What does that mean for you?

I was involved in a glorious campaign for breast cancer survivors, warriors called The Grace Project. It was founded and created by (the spectacular photographer) Charise Isis along with (the ever-so amazing) Joules Evans, two extraordinary women.

They used my line, my quote: “Wear your scars like stardust.” I think scars — whether they're physical, or emotional — are signs of huge massive bravery and courage. They often mean that someone has come through, walked through, run through, the fire.

I have two little, minuscule scars by my shoulder, and when I look at them, I am reminded how scared I was when the doctor found two cysts (years ago). I was petrified. All I thought about — mostly: oh my God, is this gonna kill me? And yes, I tend to be somewhat dramatic even when I'm told it's probably nothing. And thankfully, mine were both completely benign.

I look at my husband’s scar, which runs the length of his entire throat; I think of the surgery that was nine hours long. And the worry he had, the worry I had. I look at his scar, and I see a man who braved the surgery (the tumor was completely benign); who came through a very difficult recovery process, and not only recovered beautifully, but reignited a deep, glorious passion for life.

Many scars incorporate all that's scary, worrisome, painful, awful — reminders of fear and worry of what if, and the hope and prayer of what now. And some scars, many — from childbirth, to sports, to a personal deep life passion — show the beauty of a life well-lived, a life of risks, a life of attempting something new.

So yes, to me, scars are beauty marks. They've been earned, and with grace.

Why do you believe self-esteem is such a problem for girls and women of all ages?

I believe self-esteem is an issue for girls and women, AND boys and men. And truthfully, I think it's more of an issue with women of my generation. Women in their 50s and 60s.

Most folks, myself included, were — are — looking for validation. Looking for praise. Looking to be acknowledged. Looking for the outside world to applaud us. To appreciate us.

We were taught — most of us — to make others happy at our expense. We were taught to keep our feelings to ourselves. I can still hear my mother telling me that my feelings were wrong. It's an awful thing to tell your child that what they feel is wrong.

And more discouraging is that, along with telling me that my feelings were wrong, my mother also didn't know how to inspire me. To encourage me. To lift my spirits. Self-esteem is just that: self and esteem — something that is more or less self-love, a knowing that you're good enough, worthy. Knowing in your soul that you're mighty special no matter what.

But, that also grows through nurturing. Through being lifted, inspired, championed, supported by others. By being reminded that you're someone extraordinary with all your flaws and foibles and messiness.

So, my suggestion to all people is: Champion others. Lift others. Support others. That gives us all courage. I believe self-esteem is born from that kind of goodness, kindness, generosity.

What would you say to someone who is currently battling the darkness of depression?

I would say, “Come here, hang out with me, let me show you my darkness… You're not alone.”

Honestly, all you gotta do is tell someone you know how they feel, and in that moment — and no, the darkness doesn't dissipate — you can hear the sigh of relief. We all want to know we're not alone.

If you like this article, please share it! Your clicks keep us alive!
Tags
Amy Ferris
Marrying George Clooney
Shades of Blue
inspiration
Depression
mental illness
supporting each other